This game was selected as our April 2019 Reader’s Choice Review. Learn more on our Patreon page.

My gaming habits have changed a lot as I’ve grown older. Where I used to sit for hours and binge through strategy or adventure games, now I tend to play a single hour at a time. I couldn’t do that with Star Traders: Frontiers, though, because the old hooks of one more mission or one more battle got in me deep here. I started a new character two days ago and she’s already a legendary pirate, adored in her home system and despised across the cluster, wealthy beyond all reason. It helps that there are so many ways to get hooked on this one, so many that it can be daunting to suss out what matters and what doesn’t when you get started. But once you do, you’ve got many long, prosperous careers ahead of you in one of the finest starship command sims to date. 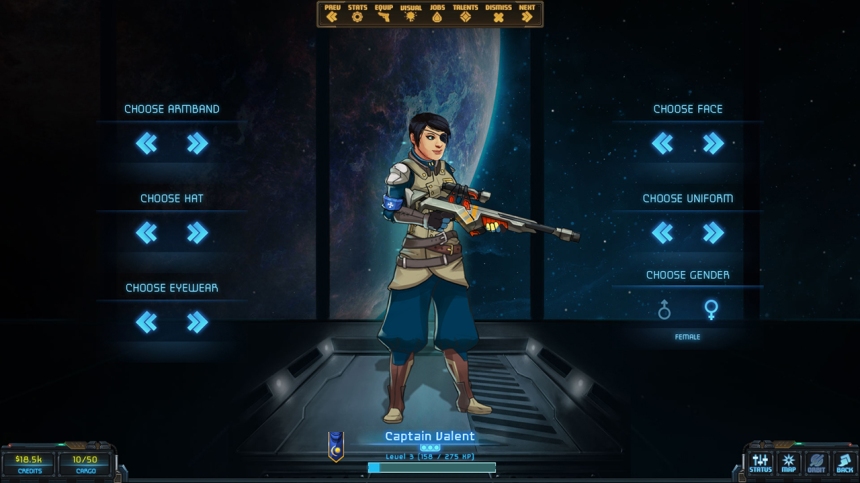 Keeping all the humans on one planet in some semblance of order is no small task, and spreading us across the universe has only magnified the problem. The many great houses and clans of humanity are united under Shalun law, a brutal mix of bureaucracy and sanctioned murder that keeps everyone from total war. But the shocking sabotage of a key space station in Steel Song space has put the crown princess of Cadar at risk of lawful murder, and the royal family is not about to take that sitting down. As a Star Trader, your spacefaring ways and independence from the factions makes you a powerful ally to the Cadar… or the Steel Song, or the Arbiter assigned to the case, if you wish to have a greater effect on the lasting peace of the universe.

This gets straight to what’s so great about Star Traders: Frontiers. The game starts you off with an excellent hook to get you immersed in the lore and political machinations afoot, with you offered a job to escort the Arbiter in her investigation. You’ll get a gentle introduction to navigating, crewing your ship, ship combat, crew combat, spying, exploring, and more as you follow the storyline and navigate the intrigues of Cadar royal court. But once you’ve been there and done that, you can skip off to whatever you want. My second character went straight to running dirty odd jobs for the Steel Song. You can go off and trade or explore or bounty hunt or pirate, either for one of the great houses or as a total independent. The universe is your playground here, with only your skill as a captain limiting your potential. 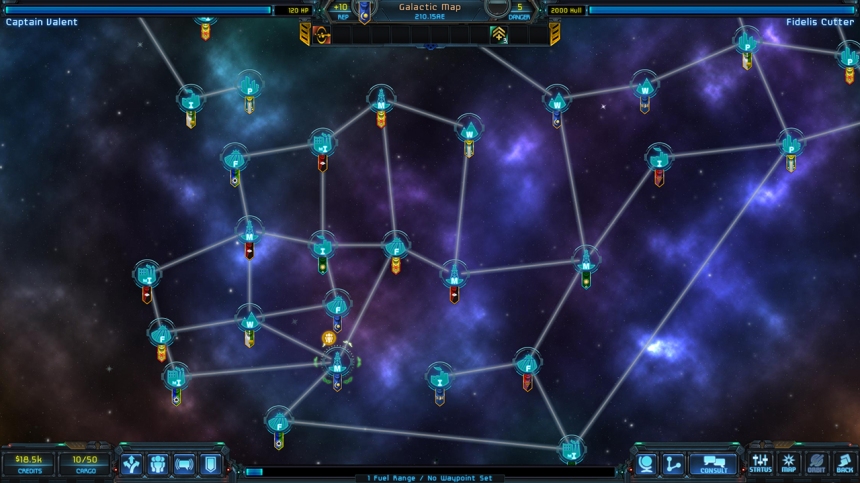 If you’re imagining some kind of Sid Meier’s Pirates! in space, you’re not too far off the mark. Star Traders actually feels more open than that venerable simulator, giving you even more ways to make your mark on the galaxy than you ever could in the Caribbean. All those adventures I mentioned before, trading and exploring and bounty hunting and pirating, they’re all their own deep systems with interactions and skills to them. If you want to rule the spaceways, you can buy and equip new ships, blockade planets, vaporize enemy ships in combat or board them directly, choose to loot, scuttle, or ransom ships, and then reap the results as your reputation climbs or plummets based on your targets. Exploration is done in wild sectors of planets, drawing results from a deck of encounter cards you can manipulate with character skills. Crew combat is a full Darkest Dungeon-esque turn-based battler with positioning, skills, and equipment to consider.

We’ll be here all day if I try to describe every system in the game, so allow me to summarize Star Traders as an incredibly deep and robust captain simulator. Anything you might want to do in space you can do here, especially if it pertains to commanding a ship or sci-fi politicking. It feels like much of the influence this title was born from can be found in Dune, what with the emphasis on royal intrigue and the use of spice as a crew morale booster. I’m glad of it, because the anachronistic hegemonies explored there don’t come around in modern sci-fi gaming all that often now. Most of the game’s systems are tied up in reputation, influence, and ranks with the different factions, right down to whether or not you can land on a planet to refuel. Even going full independent you’ll need to keep track of your relations with the factions and their relations with each other, because trade wars and death edicts can offer new opportunities for profit. 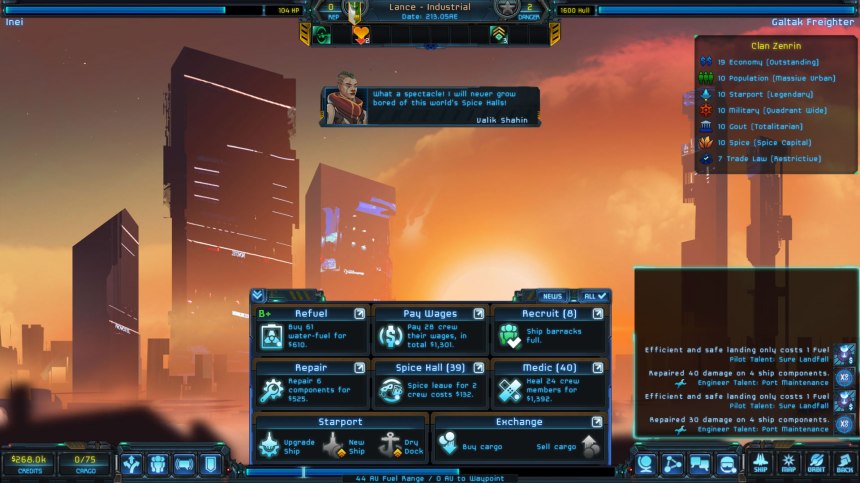 This also touches on the learning curve Star Traders: Frontiers has, which isn’t a steep one but one that requires some definite effort. Really most of the difficulty comes from not knowing what’s important starting out. My crew is what hung me up the most early on, as you can start with thirty or more people on your ship and every single one of them levels up and has their own jobs, skills, gear, and traits. Those turn out to be very important if you don’t have enough skilled crew to run your ship’s electronics, for example, or if a disgruntled crew leaves that had a key combat skill you relied on. Keeping everyone on board healthy and happy is a major consideration, especially on long trips into hostile territory where doctors and spice dens won’t open their doors to you.

It’ll take time to learn exactly how your ship handles in the tactical turn-based space battles, and which skills are the ones you absolutely need to lean on. You’ll need to learn to recognize which ships and foes you can take and which ones you can’t (do not fuck with xenos, seriously), and then what upgrades you need to your ship and crew to eventually take them. All of this is part of the adventure, of course, and the game’s many difficulty levels seem to understand this in how forgiving the lower ones are. At the basic difficulty the game starts you at, profits and experience will be plentiful and fatalities will be rare. Even if your ship is vaporized you’ll be able to carry on right where you were, just with the damage to repair and your reputation to consider. It’s a great way to learn the ins and outs before bumping up to where actions have more consequences and progress is slower, but even on the lowest difficulty it’s a terribly engrossing game.

I love starship command games in general, but Star Traders: Frontiers really might be one of the best out there. It’s not as focused on specific elements as a title like FTL, yet each of its many systems feels incredibly deep and engaging. You can easily spend an entire evening exploring the wilds, hauling cargo, spying on factions, or salvaging an orbital, and make great progress towards your overall goals. The 2D graphics are up to the task of conveying all this action, though I will knock the character designs for being a bit unnatural and weird. The sound design is just kinda there too, but this is a simulator first and foremost and it simulates the hell out of the mechanics you want. Star Traders: Frontiers is the perfect sci-fi game to get lost in for ages, trying new characters and finding your place in the many niches of this vast and thrilling universe.