I’m probably coming at this from a unique angle, as the last Yoshi game I played had to have been Island on the SNES. It’s probably my all-time favorite Mario title, honestly, with how packed to the brim it is with colorful crayon art and creative encounters. Yoshi’s Crafted World hits a lot of the same notes with its powerfully charming presentation, enough to take me back to the good old days of hucking eggs and hunting happy flowers. It’s not quite the same experience, though, and while there’s plenty of magic to be had in this whimsical title, it doesn’t manage to reach the same inventive heights as the progenitor of its line. 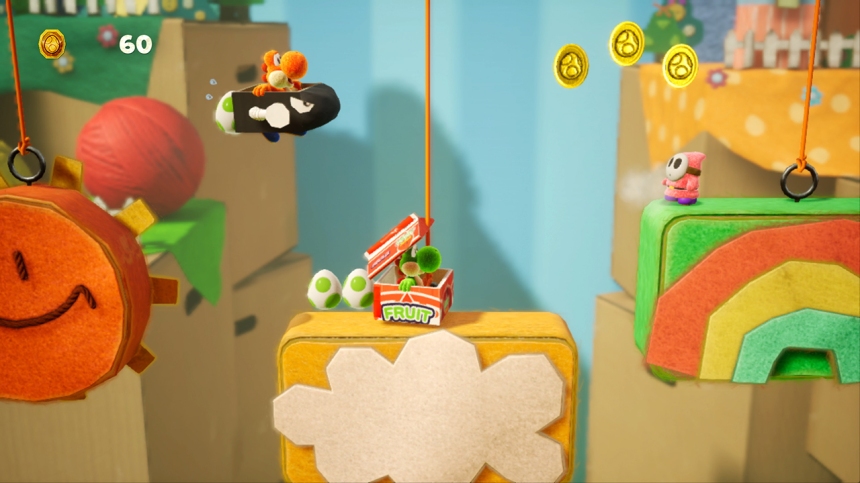 Like any good tale in the Mario universe, this one starts with Bowser mucking something up. In this case, it’s baby Bowser trying to run off with a magical dream stone of the Yoshis. said to grant wishes. He and Kamek make a mess of it, and the five gems inlaid in the stone get scattered willy-nilly. The Yoshi’s aren’t about to let that stand, of course, and so they set out on a grand adventure to recover the precious doo-dads. Their journey will take them across a world of hand-crafted wonders, from paper bushes and cardboard towns to origami castles and styrofoam tombs. Bowser and Kamek will do what they can to get in the way, but working together the Yoshis are sure to restore their treasure to its former glory.

The way this plays out, of course, is as a pretty traditional platformer. Yoshi follows a yellow paper path along a 2D plane most of the time, with the occasional path or passage into the foreground or background. What you do along these paths will be immediately familiar to fans of Yoshi’s Island, such as hunting for flowers and red coins hidden among the hundreds of normal coins, devouring enemies to turn them into eggs, and chucking those eggs at other enemies, coins, and sundry targets. You may have to adjust to the manual aiming of the eggs with the analog stick, but scoring tricky shots to nab a flower is just as gratifying as it ever was. 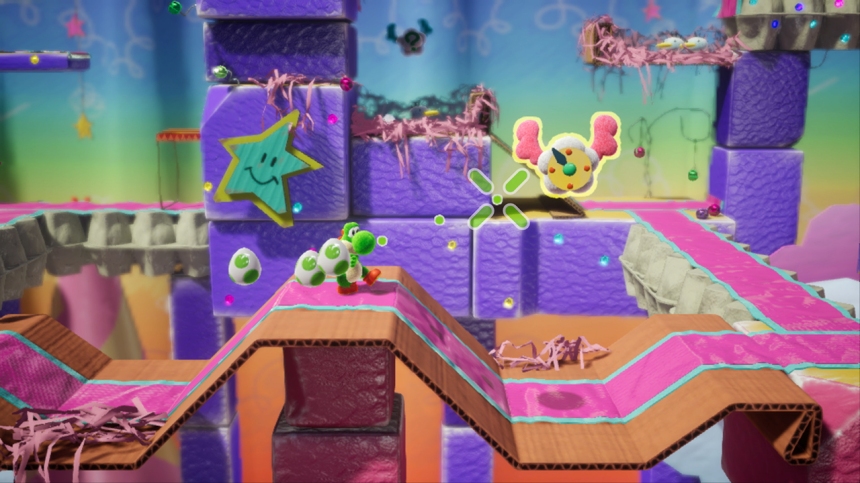 It’s going to be a bit easier than it ever was, too, especially if you’re still hearkening back to the SNES days. Most of the enemies you’ll meet, such as shyguys and piranha plants, tend to be pretty slow and rather uninterested in hassling you. There are pits and other hazards to beware of, but those just send you back to the nearest stable platform if you fall victim. There are a few more aggressive foes later in the game, and bosses can have fairly involved patterns, but all of these challenges can be easily overcome with a little focus. The game mechanics themselves feel tipped in your favor, such as Yoshi’s traditional floaty jump. You can actually re-apply the flutter so fast that you lose no altitude off your jump, allowing you to fly indefinitely with just some carefully-timed button presses.

I wouldn’t consider the lack of difficulty a dealbreaker, though, especially with some of the other challenges the game poses to you. Speaking as someone who 100%-ed all of Yoshi’s Island (bonus levels included), finding all the flowers and red coins in each level here can be surprisingly tough. I’ve only fully completed a few stages, with most having a few red coins tucked away somewhere I can’t fathom. One factor in this is how you can throw eggs at anything in the foreground and background, meaning carefully hidden presents or enemies might be hoarding your coins somewhere in the blur of the depth of field effects. There are also some neat gimmick levels like shooting galleries and acrobatic challenges that require true mastery to wring all the goodies out of. 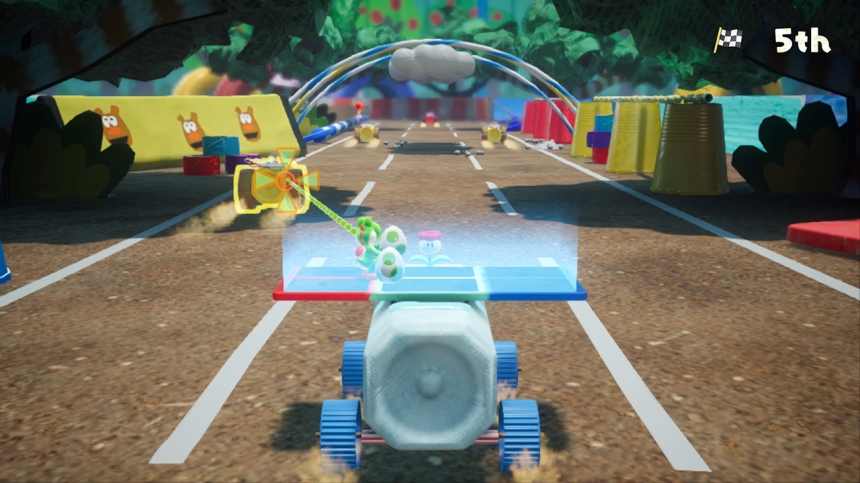 There are quite a few of those clever gimmicks, sprinkled in among the numerous and diverse stages, so you won’t need to worry about having enough ground to cover here. The titular crafted world is split into something like 16 thematic areas, each with one to three stages each. These can cover motifs like jungles, carnivals, space, the ocean, and snack time, with adorable handicraft graphics to match. Once you finish a level you can play the flipside, which is a run through the reverse of the level to find three Poochy pups within a target time. Then, once you beat an area, its cardboard robot custodian will send you on a scavenger hunt to find things like cows and hats in the backgrounds (and foregrounds) of the levels. Oh, and all those coins you collect accumulate and can be spent on gumball machines filled with absolutely precious costumes for your Yoshis.

We’ve talked around it plenty because it should be plenty obvious, but good lord this game is adorable. The designers of this crafted world took their inspiration and ran with it, composing every single aspect of every single level of items you would find in a kindergarten art class. We’re talking cotton ball clouds, coffee can trains, pipe cleaner plants, pie plate fish, and so much more. Your enemies are wonderfully felty, fuzzy, or shiny, and the costumes you unlock are just the cutest little cardboard cutouts of boxes or fish or flowers for your Yoshis to toddle around in. The quality of the presentation here cannot be overstated, and really needs to be seen in motion to be fully appreciated. 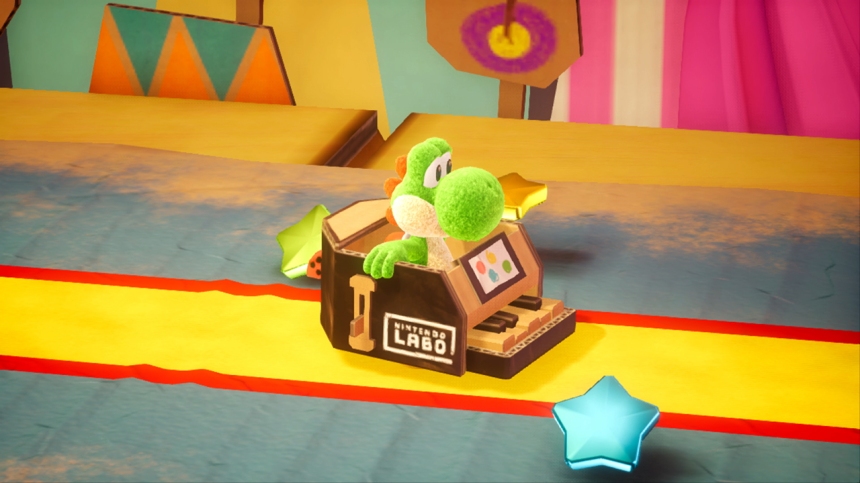 You can bring a friend along on this magical journey, with one Yoshi able to ride on the other if they so choose and fling unlimited eggs like some kind of mounted dairy gun. Between that and being able to hold your fellow Yoshi in your mouth and spit them like a projectile, the co-op mode is somehow even easier than normal. Again, don’t let the difficulty dissuade you though because there is a lot to see, do, and love in this title. It’s not quite the same magic as Yoshi’s Island, but it doesn’t need to be, either. Yoshi’s Crafted World has its own look and feel, one that you may never see the equal of. Fans of light-hearted adventures and collectathons will not want to miss this one.