Review: The Death of Erin Myers

They say truth is stranger than fiction, and anyone who’s ever read more than one “Florida man” stories will know that to indeed be true. Unfortunately, that doesn’t mean that fiction gets a free pass to do whatever it wants. As unbelievable as life can be sometimes, we need some degree of grounding in our make-believe to actually believe it. The Death of Erin Myers does a lot in the small space it gives itself to tell a powerful, emotional tale, but I’m not sure it lays all the groundwork it needs to for the payoff. It’s still an entertaining journey thanks to some moody presentation and quality puzzles, just perhaps not one that ends as strong as it should.

Spoiler alert, Erin Myers is dead. The questions left to you, the player, are the hows and whys of her demise. You’ll be presented with nine scenes from Erin’s life that pertain to her decoupling from the mortal coil, wherein you play as her in first-person point-and-click style. These scenes are out of chronological order but provide a gradual reveal of the decisions and mistakes that lead to her end. There are no choices to make here, and no alternate endings, just vignettes that show you important glimpses of a life before it is snuffed out.

I will stay out of actual spoilers as best I can, but know that the first of these scenes sets the tone of the game in a very dark place. Erin’s childhood was not a happy one, and that’s important color for the rest of her tale. In fact, it might be given undue importance because you’re probably going to find that Erin is not a particularly likable character. The descriptions you get from inspecting items tend to be extremely judgmental, and there’s more than one scene where you are faced with some rather unpleasant secondary characters that Erin fails to disabuse of their low opinion of her. There’s not a lot over the course of the game that helps justify her sneering attitude and questionable ethics, which leaves her childhood traumas as a rather belabored source of her seeming misanthrope. 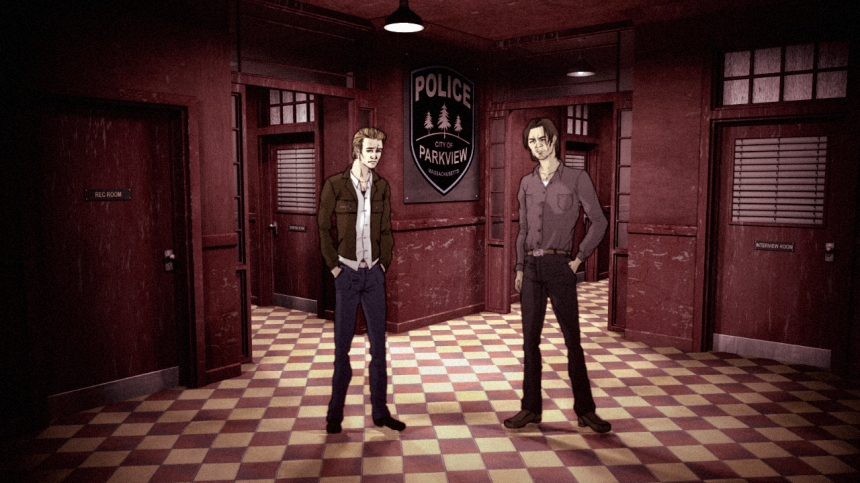 Having a strong reaction to a character can be a credit to the characterization, but I don’t think having such an unsympathetic character at the heart of a murder mystery helps the narrative. Normally, when you have a character that the audience knows is doomed, they’re given time to form a connection with the audience so that dread and loss hits that much harder. In the short narrative format this game uses, there isn’t really time to explore Erin’s sympathetic sides or even explore her motivations. The focus is on the terrible trajectory of her fate and her rather drawn-out fall, without really showing any kind of rise to the player. Ultimately it makes some of the moody writing come off as a bit immature, and the big climax near the end loses its impact because it’s not really shocking or damning of Erin, given what the player experiences through her eyes.

At this point you might be wondering why I’m still recommending this game after dismantling the story over several paragraphs. Honestly it’s still a decent, compact tale even if it didn’t quite hit the right notes for me, but more importantly it’s a pretty fun game to see through. Each of the nine scenes you play through are built around a single challenge, from getting blood off the floor to opening a locked hatch. The solutions tend to be pretty creative, ones that you wouldn’t see anyone in the real world using but ones that utilize plenty of inventory items and the more fun aspects of adventure game logic. There’s a good balance here of unorthodox item uses and combinations with a smaller scope, meaning it’s easy enough to experiment for a minute to get what you need done.

Make no mistake, this game will last you not much more than an hour, but it’s a fine little slice of point-and-click gaming. It’s put together with some decent pre-rendered backgrounds and hand-drawn characters that don’t mesh particularly well but get the job done in terms of tone and visual clarity. The only replay value you’re going to find are five achievements off the beaten path, but again this is a very linear, story-based experience you’re signing on for. Frankly, aside from my issues with the story it’s a very solid point-and-click romp, and definitely worth what’s being asked for it. As the first in a planned series of five stand-alone short adventures, The Death of Erin Myers has me interested in seeing what else this developer has in store.