Review: Courier of the Crypts

It feels like there are more games with strong, beautiful art styles out now than ever before, and that’s great for someone like me that gets weak in the knees at some lovely pixel art. That’s what drew me to Courier of the Crypts, a creepy, meandering puzzler that sends you through the depths of ominous caves and catacombs with only a torch to light your lovingly-rendered way. I can’t help but assume that games with such care put into their visuals have similar care put into their designs, and from the onset that certainly seems the case with Courier here. It’s a charming, challenging journey to be sure, just one that sometimes seems hard-pressed to push past its central concept.

You are an unnamed courier in an unnamed medieval land, sent by your stereotypically rude boss to deliver a missive to the priests managing a distant crypt. Following a brief journey montage and some cryptic (see what I did there?) introduction, you find yourself thoroughly lost in the halls of the dead. Fortunately, there’s a magic torch to help keep the shadows at bay as you find your way out. Unfortunately, those shadows are hiding some nasty critters and traps that don’t want to see you escape. As you navigate the depths, a nefarious plot begins to unfold around you, one that you might just be in an opportune position to do something about.

That torch that I mentioned is a pretty big deal, and what most of the adventuring in the game is built around. Your journey is separated into top-down levels on an underground world map, each of which challenges you to reach the exit alive. Most of the levels are thoroughly steeped in darkness, with only a few errant torches or slivers of moonlight to navigate by, so your torch is key for getting around. It burns down, of course, so you can put it out when you don’t need it. But that fire is also the only thing keeping the critters of the crypts from bee-lining for your tasty flesh. And if the torch ever runs all the way out, you only have a few seconds to re-ignite it before some very light-averse ghosts decide to take out their aggression on you, fatally. 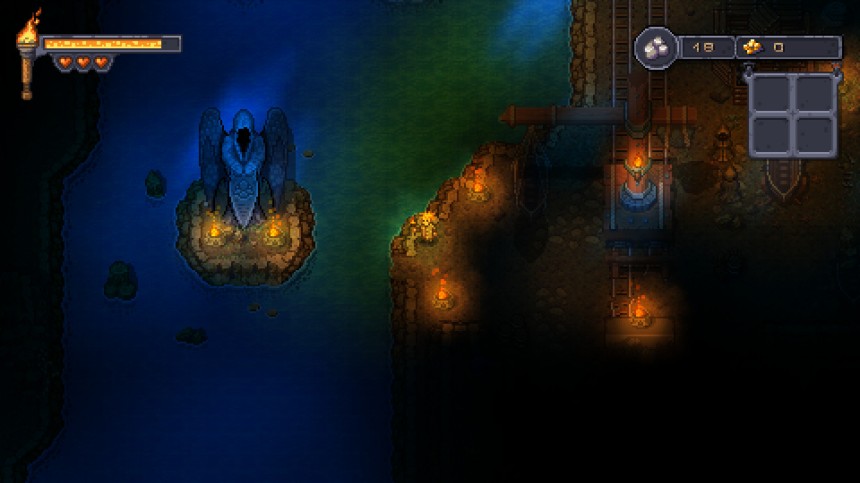 The torch has other uses, such as showing hidden magic markings and triggering a few interactables, but it’s mainly there to put time pressure on your exploration and give you a resource to manage. There are no real safe solutions for keeping your torch topped off, either. Certain orbs around the levels can be broken for some quick fuel, and while checkpoint braziers will restore it indefinitely, triggering a new checkpoint destroys the old one so you’ll never have a permanent safe haven. Conceptually it’s a good way to keep the player moving forward, but it has its drawbacks. The margins on some levels can be pretty tight, limiting your exploration in levels with half a dozen secrets to find or more. Enemy behavior feels unnatural with this system too, the way enemies will break from their patterns and pursue you all over the level just for putting your torch out. And some of the puzzles are tricky enough that you may run out of torchlight before stumbling across the solution.

To keep the game from just being a top-down puzzler (which might have been fine with more puzzles, honestly), there is combat with hucking rocks and fire jars at foes that you can’t otherwise avoid. This also leads to boss fights which, personally, I thought were fine changes of pace but could be frustrating for folks looking for a more low-key adventure experience. There’s loads of treasure to find in each level, often hidden behind secret passages and breakable windows, which can be spent on permanent upgrades to your torch. Collectible relics and notes also dot the levels, the latter of which reveal a sinister plot by the inhabitants of the crypt and your place in their machinations. It’s a decent story, but one with some odd twists and some dim-witted observations from your salt-of-the-earth protagonist.

Honestly, I like what Courier of the Crypts is going for, but I don’t think it quite made it all the way there. I want to stress again that the art style and presentation is fantastic, sticking you in these grim, moody catacombs with all kinds of creepy ambient noises. Parts of the gameplay are solid as well, namely the exploration and puzzling. It just gets dragged down a bit by the emphasis on combat and the occasional challenge of managing your torchlight. They’re not bad inclusions, but they can be at odds with other parts of the design. What I’m getting at here is that Courier of the Crypts is a decent little adventure with a different sort of emphasis than most adventures, and I think it’s that emphasis that keeps me from really loving it.