There’s a fair glut of first-person roguelikes around now, a far cry from when the field was pretty much Paranautical Activity and Ziggurat. Each needs to carve out a special place of its own, whether it be Immortal Redneck’s fast-paced vertical combat or Void Bastards’ methodical scavenging. City of Brass appears to find its niche with its unique setting and art style, a legendary Arabian city chock full of treasure and revenants. And while it does indeed have a fantastic look, it’s the combat that really stands out to me here. Using a clever mix of ranged and melee weapons with slow, powerful attacks, this one makes you feel like the baddest-assed whip-wielder since Dr. Jones or the Belmonts.

The City of Brass is said to hold untold riches and fantastic powers, but none who have plumbed its depths have returned. All the city’s inhabitants have been reduced to vicious, moldering revenants, lorded over by a cadre of genies. These aren’t the charming Robin Williams genies, nor even the questionable Will Smith genies, though. Most of them will trade with you if you’re willing to part with your treasures, granting you equipment, blessings, and other aid. But some would just as soon see you dead, and have all manner of mystical means to do the deed. And if the revenants and genies don’t get you, the shackled guardians preserving the curse on the city certainly will.

A run of City of Brass consists of twelve levels and a final encounter, split into four thematic areas. Each level is an impressively randomized crush of plazas, chambers, hallways, alleys, and balconies filled to the brim with traps and treasure. You need to reach the exit before time runs out and worse things get on your tail, but you should have enough time to explore for loot and secrets. The level layouts tend toward loops so even if you spurn your compass and wander off, you’re probably just taking the long way to your destination. The scenery is vibrant and detailed, and worth checking out because treasure could be secreted away on every ledge, shelf, and barrel in the city. 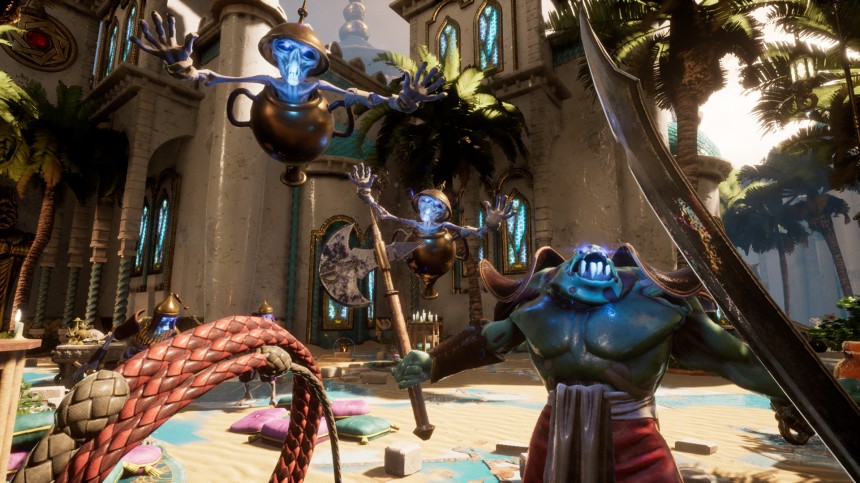 Exploration and collection is aided by your secondary weapon, a trusty whip. Right-clicking winds up a lash, which interacts with almost everything in the game world. Whipping enemies in the face stuns them, whipping treasure or throwables brings them to you, whipping rings lets you swing through air, whipping traps triggers them, and so on. Just like your primary melee attack it has quite a bit of wind-up once you click, but hits whatever you’ve got your crosshair on when it comes out so you can start the action and flick it onto your target like some kind of esports superstar. Your crosshair also very helpfully changes to indicate if you can whip something and what it will do once it gets in range of a target.

Coupled with your melee attack, the whip makes combat extremely tactical and a lot of fun to pace out. Normal foes can take two to three swings to kill, with larger ones taking more and shielded ones requiring specific tactics. You can’t swing fast enough to kill a whole group like that, but stunning with your whip and controlling distances around you can manage a group for you to whittle down. The environment is also a powerful tool, with traps you can push or pull foes into with special whip moves and throwables that are generally one-hit kills or utterly debilitating. I can’t think of another game where I spent so much time in combat interacting with the environment to such great effect, and there’s nothing like getting cornered by some hulking beast only to shove it into a bottomless pit.

You will need to watch out for those traps, of course, because they are densely-packed and quite lethal to you as well. Health isn’t too hard to get back, though, as there’s a genie who can heal you for a price and some gear items that help you restore your hearts. Once you get the cash flow going you can score all kinds of neat passive items and new weapons, as well as other bonuses like allied ghosts. Honestly once you get a feel for the pace of the game it’s not a difficult one, and I managed to beat it on my fifth or sixth attempt. The bosses were the biggest roadblock, mainly because each has a puzzley sort of gimmick you need to work out before you die. You do unlock difficulty modifiers as  you play that can make the game harder, and there’s a full set of modifiers to make the game easier right from the start, so you can put the game right where you want it to be to have a good time.

There’s a lot to love about City of Brass, between the engaging combat, rewarding exploration, and vibrant setting. It took me a few runs to get a feel for fighting, especially coming off of more fast-paced FPS roguelikes. But once I did I really appreciated the deliberate pace, and how combat flows smoothly from one target to the next. The roguelike elements are strong here as well, with powerful mystery potions to quaff and a wide variety of items to unlock and use. Fans of the FPS end of the genre should not miss this one, and anyone looking for some thoughtful melee combat in their adventures should take the plunge as well.