This game was selected as one of our two June 2019 Reader’s Choice Reviews. Learn more on our Patreon page.

Eventually there will be roguelike mash-ups of every other genre in gaming, and I welcome this procedurally-generated future. They won’t all be good, they won’t all realize their potential, but they’ll breathe a special form of life into genres that can fade at times. Flight sims aren’t a huge market and arcade sims an even smaller portion of that, so the potential for games like Sky Rogue to offer endless replayability in such spaces is terribly exciting. It doesn’t quite meet that lofty goal, and its got some rough edges, but the simple, beautiful core of the experience makes for some great action while it lasts.

The only lore you’re going to get in this one is by digging into the in-game Wiki entries for planes and weapons, so don’t concern yourself with it too much. You’ve been put on a series of missions to take down key opposition targets on your way to some nebulous secret weapon that could spell doom for your faction. Mission targets range from command centers and laboratories to squadrons of transport planes and bombers to massive sky fortresses, all accompanied by fighter craft and defense emplacements. Scoring kills nets you currency for upgrades and research for meta-game unlocks, so it’s a good idea to hang around the mission area notching targets if you can. If you can make it all the way to the thirteenth sortie, you’ll find just what the opposition has been cooking up for you.

Sky Rogue controls with either keyboard & mouse or a gamepad, and you can set it to simple controls where left and right turn or sim controls where they only roll the plane. On a gamepad with sim controls it flies like a dream, allowing for careful dogfights and close-range gun kills. Your plane can load up to 4 weapons as long as they don’t exceed the weight or aeronautics limits for that aircraft, and the starter plane comes with a vulcan cannon, homing micro missiles, and dumb-fire rockets. It’s a good mix for getting adjusted to the game, with missiles for air-to-air, rockets for big stationary targets, and the gun for finishing things off. 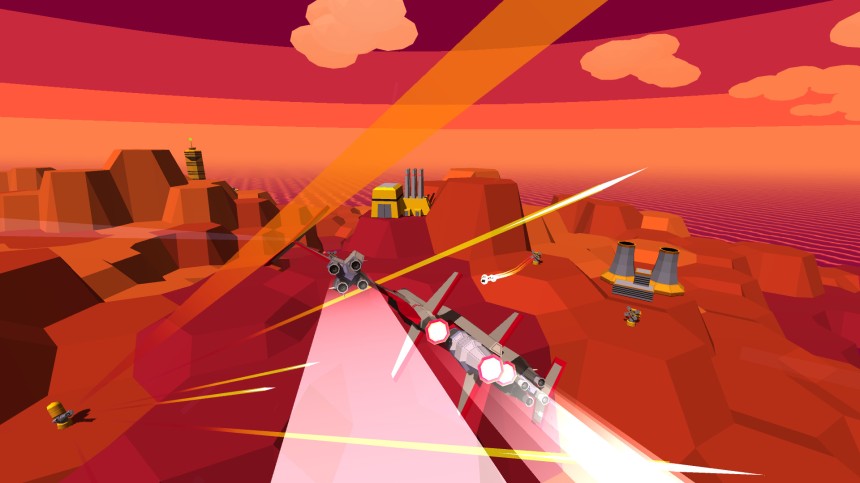 Each mission is randomly-generated, launching you from an aerial aircraft carrier into the skies above a suspiciously hex-tiled archipelago. Usually the game will spawn a few patrol craft, as well as enemy carriers and aerodromes from which they can launch additional foes. Once you get in the mix and start taking down targets, reinforcements can arrive from the edges of the map, and on later levels this can get overwhelming quickly. Fortunately your plane can load utility items like flares, and has a brilliant dodge roll by clicking the left stick that shakes missiles off if they’re close enough when you use it. Honestly the dodge roll might be the single best addition to the game, a tactical tool that’s almost always at the ready and allows you to stylishly avoid damage if used correctly. Also you can always retreat back to allied landing strips to repair during missions.

As you progress, you’ll need to keep your planes and loadout upgraded to survive more numerous and advanced enemies with more powerful weapons. SAM sites and gun turrets give way to flak cannons and railguns, and the enemy fighters go from drones to ace pilots who use flares and boost out of missile locks. Your plane and its weapons can each be upgraded three times, and those upgrades are only good for that run. I won’t deny that the later missions get absolutely crazy, but the simple, open design of the missions can make them very easy if you bee-line for your target and back. On my last run I had a fully-upgraded medium bomber by the halfway point, and it had so much armor and such powerful bombs that I could dive-bomb targets and sprint home with impunity.

There are also hints that the game might not be as polished or stable as it might first look. In my first three sorties the game failed to award me any kind or currency or research, which made that first run something of a dud. Levels have randomly-generated names but in the back half of the game they stopped generating, just being listed as ” Island”. And ultimately, there’s not a lot of variety beyond unlocking new planes and weapons. You can do the mission mode, an endless mode, and co-op with your friends, but that’s it. The missions are always “kill X and return”, the escalation in opposition is always the same, and unless you vary your own tactics they’re going to play very similarly. It looks great and controls wonderfully, and the fighting is absolutely a blast. But if the early game suggests to you, as it did me, a roguelike Ace Combat mission generator, it’s probably going to fall a bit short. I’ll definitely keep playing it, just maybe not forever as I had hoped.