Classic roguelikes like NetHack, Crawl, and ADOM all seemed to take the same general theme and design, and expand upon them in their own ways. Most roguelikes of that era focused on a fantasy quest to obtain some magical thingamabob at the end of a grueling quest, usually at the bottom of some terrible dungeon. But the mechanics of each differed enough that your conduct and strategies could be entirely dissimilar between games, especially if you branched out to wild titles like IVAN. Barony is another roguelike to take on the classic quest of dungeon diving, but this time from a real-time, first-person perspective. It’s perhaps the only game I know of that marries classic roguelike conduct with free-wheeling action, and the result is wonderfully polished and engaging, if quite challenging. 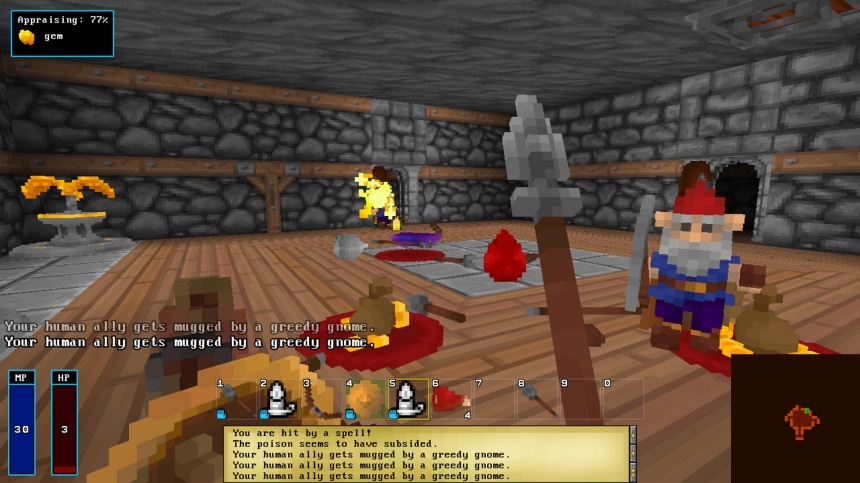 The specific flavor of this fantasy crisis is necromancy. An unpleasant lich by the name of Baron Herx has taken up residence in the appropriately-named (and extremely deep) Devil’s Bastion. It’s never a good idea to have evil lords in the neighborhood, so you have elected to descend into his domain and serve him some final death. Herx has quite a few minions to deal with first, from rats and skeletons to trolls and vampires. There’s also quite a bit of gear laying around that will help you dispatch these despicable creatures, but you’ll need some time to sort the blessed swords from the cursed helms, and figure out which potions are fruit juice and healing instead of poison.

In terms of mechanics and progression, anyone coming from NetHack or Crawl to this will be immediately familiar with the setup. Each floor of the dungeon is a big square filled with randomly-generated halls and chambers, and then sprinkled with enemies and loot. You can use whatever you find, weapons and armors and spellbooks and potions and jewelry and food and such, but you’re asking for a bad time if you don’t appraise it first. Fortunately your appraising skill is passive, working through one item at a time in order of shortest to longest appraisal time. Waiting to equip something will mean the difference between picking a mighty blessed sword to wield and having a dull, cursed hatchet welded to your hands. 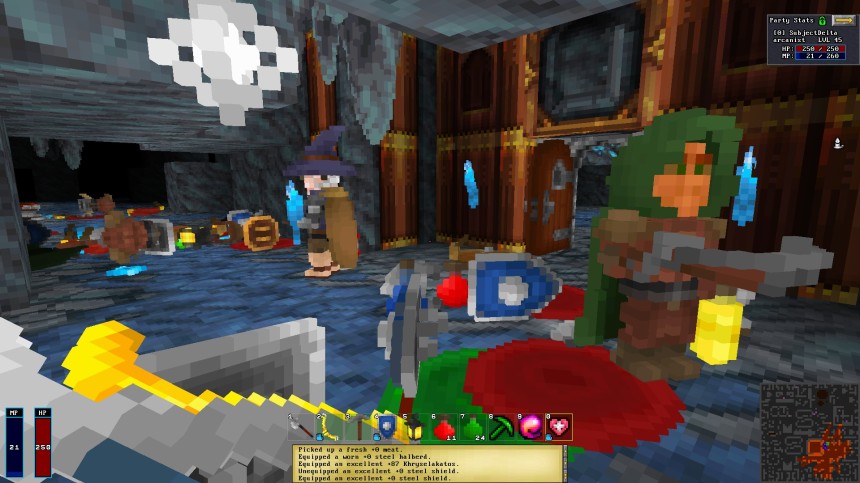 There are other aspects of roguelike conduct to consider here, like avoiding traps, figuring out what to do with things like altars and fountains, and hunting down useful effects like levitation and magic reflection. You won’t run into anything as complex as inscribing wands or wielding cockatrices but there’s a clear line between modern FPS roguelikes and this. Barony has much more in common with NetHack than Ziggurat or City of Brass, because your success is much more tied to your gear and how you manage it than your reflexes. And this is going to mean a lot of dying early on, just like in the classic roguelikes of yore. Prepare for a significant learning curve even with the “beginner” classes as you struggle to learn what gear to prioritize, where to find healing, and what threats the various monsters pose.

The difference, of course, is that this is an FPS, not a turn-based grid-crawler. It’s not even an in-between like Legend of Grimrock, this is full-freedom running and stabbing things. That doesn’t make it easier, necessarily, but it does make the game more liberating and more immersive, even with its chunky voxel monsters. Combat is still mostly strategic, too, as your strafing and backwards movement is much slower than charging forward. You can swing, block, and sneak, and that last one is particularly useful and a robust system unto itself. I normally don’t play stealthy characters in roguelikes but I found it both effective and gratifying here because of how well stealth functions. 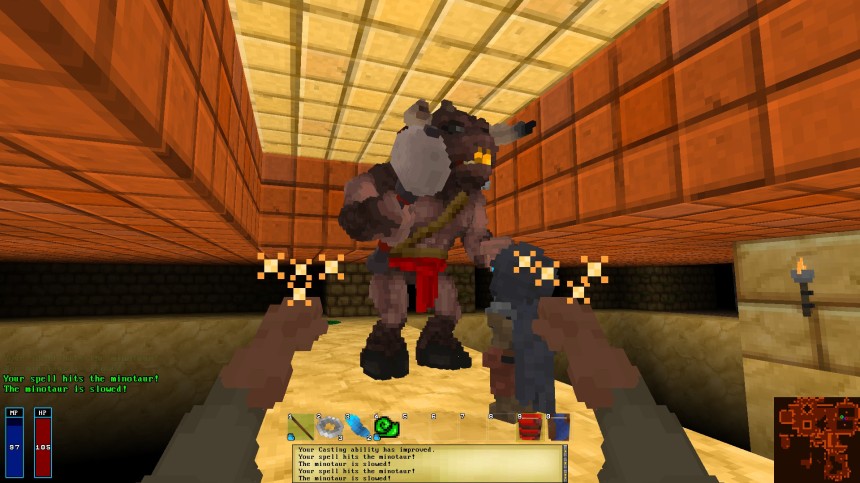 Ultimately what you’re getting is a sort of cross between NetHack mechanics and first-person combat, all with that Minecraft aesthetic that’s all the rage these days. It’s all the fun and challenge of managing inventory and learning item interactions from a first-person perspective and with the pressures of time passing. Like I said, the learning curve is steep, but it also feels more inviting to new players than its inspirations, since the more obscure conduct is dropped and the gameplay is more visceral. On top of all this, it’s still being developed which is remarkable for a nearly 5-year-old game, and just got DLC that adds new monsters and classes on top of its already sizable player class offerings. If you want a new approach to old mechanics, Barony is a surprisingly good stab at refreshing the formula.