There are games that come to define a genre, and Slay the Spire has done that for the admittedly narrow deck builder roguelike field. It didn’t invent them, and it’s not necessarily the best of them, but its influence can be felt far and wide. Case in point is Fate Hunters, a familiar take on dungeon crawling using an ever-growing deck of weapon and skill cards to take on ever-deadlier monsters. Similar inspiration doesn’t automatically make for a similar experience, though. While Fate Hunters has the mechanics of deck building and combat down, some of the challenges and progression systems threaten to spoil what fun there is here.

You are one of five heroes, tasked with climbing a tower to… battle… the monsters within? I suppose it’s notable that there’s absolutely zero plot here, like literally nothing. You won’t even find any world-building in the cards, monsters, or even class descriptions of your characters at the beginning. You’re here to kill and loot things, and it’s enough of an excuse to dispense card-based violence upon some legendary nasties. You’ll face everything from goblins and slimes to warlocks and dragons on your way up the tower, and turn all manner of enchanted blades and mystical spells against them. I can’t tell you what you’ll find at the tippy-top, but I can tell you that you won’t be worrying about it for a very long time.

Fate Hunters is an incredibly easy game to pick up and start playing, perhaps moreso than any other deck building roguelike. You start with a deck of maybe a dozen cards, representing weapons and skills and items like potions. On your turn you draw five cards, and you can play them all if you so choose. There’s no mana or action points to worry about, you just play what you’ve got. Once you’re done slamming down cards, your foes (who are also cards) will do their damage to you, and perhaps cause some kind of effect if it’s listed in their description. Mostly they just hit you, so your main concern every turn is mitigating as much incoming damage as possible as you whittle down the enemy group.

It’s a very pared down combat system, but one that still offers plenty of challenge. Your cards being free of resources leads to an interesting balance where powerful cards need powerful drawbacks, and rarer cards tend to simply be better than more common ones. Many cards like potions are consumable, meaning they leave your deck once used, and others cannot be played normally but must be discarded by other effects to work. Enemies can also add wounds and curses to your deck, and some can even exile cards, meaning they get erased permanently. There’s much more dynamism to decks here because of all the additive and reductive effects, and also because you can take as many reward cards as you want after each battle.

However, what this formula lacks is not complexity, but balance. In a game about mitigating damage, there’s very little emphasis on defensive cards. Blocking effects are rare, and useful statuses like stuns and weakening are mostly on consumables. On top of this your health pool is relatively small, feeling more sourced from Magic: The Gathering or Hearthstone than Slay the Spire. But the combat is still Slay the Spire, meaning one bad draw can see half your health evaporate. That can happen in Slay the Spire too, but usually that means your deck was poorly balanced. In Fate Hunters, it really just seems to happen as a matter of course since you’re mostly drawing for damage. Ultimately you’ll be mitigating more damage through healing than preventative measures, and if your heals don’t come up when you need them most, that’s your run done. 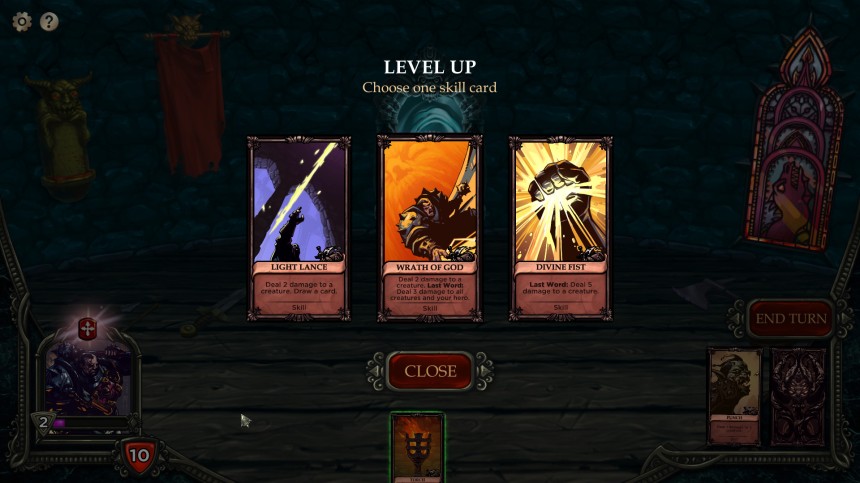 The other element that really drags this one down is the meta-progression. Certain cards you add to your deck have a Treasure value, which can be converted to coins post-run to spend on unlocking new classes and starting cards for those classes. The only way to get those coins, though, is to survive your run. That means either beating the whole run, or choosing to cash out early after one of the bosses. If you die at any point, for any reason, you get nothing. It’s also worth noting that Treasure cards generally have no use, so they pad out your deck and make fatally bad draws all the more likely. And there’s a fair bit of variety to the bosses, enough that they can easily take you unawares the first go or two you have at them.

What that leaves us with is a deck builder roguelike built on decent fundamentals and flawed balance. I’ve gotten a lot of enjoyment out of the combat and card selections, and there are definitely some very neat combos you can construct here. But I’ve had really fun runs end on bosses that pulled 4 damage attacks randomly on three turns in a row, or on fights with really hard-hitting enemies where I just didn’t draw any damage or mitigation on turn one. The best card games live on mastery and use the random factor to shake things up, but Fate Hunters falls a little too far on the random side. It’s a shame because I love the bold, comic-booky art style and solid sound design on top of the gameplay, up until the point that I get cut down with seemingly no recourse. I still say this is a fun game, just one that calls for better balance or maybe just shorter play sessions.