One of the biggest ironies in gaming is when you have an extremely unique-looking game with extremely samey gameplay. It happens a lot with games made more with artistry than mechanics in mind, but any title can fall prey to its gameplay loop becoming tedious. Soulblight certainly comes with a strong aesthetic and story foundation, but very little to recommend beyond that. I thought there was potential in the strange, twisting realms of this title, dotted by funguses and bizarre machinery. But every level came down to rummaging through chests and playing clumsy tag with guards, and there are far better games for both of those out there. 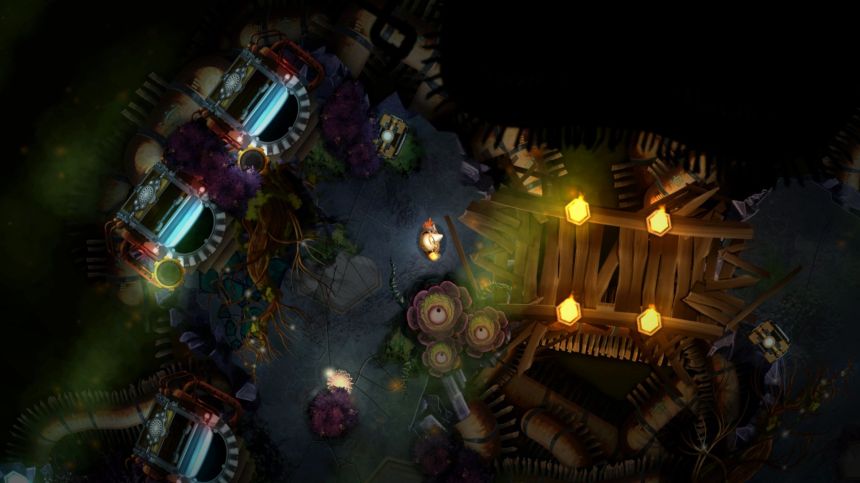 The opening introduces you to Soul Tree, the source of all life and balance in the world. Humans, birthed by the tree, built a great sanctuary around it to both keep it safe and harness its powers. But such captivity caused the tree to wither, and spawn corrupted creatures that overtook the sanctuary. You are the most recent adventurer to plumb the depths of this fallen domain, in the hopes of restoring some semblance of balance to the world. But the halls ahead are far more twisted and choked with oddities than you can imagine, and surviving their dangers will require you to change as well.

Soulblight presents itself as “a dark, unforgiving, top-down action roguelike luring you to cross the thin line between good and evil” but there are no orphans to save or morality gauges to fill. You have traditional RPG stats that determine things like your damage and movement speed, but you also have synergy which can boost or reduce all of your other stats. Synergy is modified by a lot of factors like item buffs and wounds but primarily by taints you can take that affect how your character plays. These are accepted by taking different paths between stages, and do things like change how often you get hungry or how powerful you are while drunk. Without classes in the game, this is the clearest effect you will have on your playstyle, though because of how levels are designed these will be details at best. 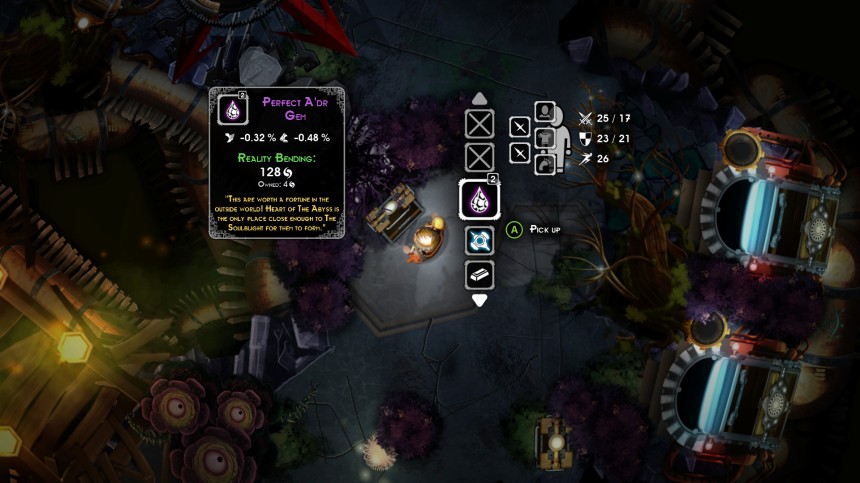 Every level of Soulblight is a tangle of paths between overgrown foliage, ruins, machinery, and other dense weirdness. There’s a gate to the next area locked by a gear you need to find in a treasure chest somewhere, and there are dozens of those chests to check. Some are locked and require lockpicks to open, and others are trapped and require tools or luck to disarm. Your main concern, though, are the enemies wandering the area on patrol. They have a visibility range you can see while sneaking, and can hear you if you walk normally or make any loud noises. Sneaking up behind them allows you to snap their neck for an instant kill, but if they spot you it comes down to melee combat. Your weapons have to be swung by charging up and releasing your stamina, making combat a slower, more paced affair. You can also grab enemies to make them more vulnerable to attacks, which you’ll pretty much need to do all the time unless you find some grossly overpowered weapon.

The weirdness of all this will carry it for a bit, as you hunt around vibrant, visually-busy morasses for treasure and battle their guardians. You’ll find a lot of items that won’t have immediately apparent uses, and others like snails that you can pet or eat. Eventually you’ll reach a boss that you’ll need to have mastered the strange, sticky combat for, and if you beat it you’ll take another strange mechanical energy-bridge passage to the next cluster of ruins and foliage. There’s really no variety to the levels or combat beyond that. You’re always looking for that key gear, you’ll always want to stealth up to enemies for instant kills if you can, and you’ll always be doing the same melee dance to take down alerted foes. A lack of variety to gameplay isn’t the worst thing when the core gameplay loop is compelling, but here it’s just awkward and confusing. Several hours in and I’m still not clear on what I’m working towards or what I should be looking forward to in terms of loot or exploration.

For everything that Soulblight does to be unique, the gameplay still turns into a repetitive slog. And even the unique aspects don’t serve it as well as they could, considering how confusing the levels can be to just figure out where to go and what to interact with. I can’t even tell if there’s any meta-progression to the game, as the odd NPCs that populate the post-death hub just ramble about the metaphysics of the place before sending me out into the same areas. Soulblight needs clearer direction and more compelling gameplay to succeed, because its weird airs and mysteries do more to exacerbate its problems than draw players in.