As much as I love unique presentations in games, you don’t see them all that often. Katana ZERO and a few others have gone with the VHS motif, others like Cogmind go for the old-school terminal feel, but most games don’t pay much mind to framing. Not Trials of Fire, though. The opening loads you into the open pages of a great fantasy tome, and you might think Oh, that’s a nice menu. And then when you pick New Game and set up your run, the pages turn to show the new options. And THEN, once you start the game, you realize the whole thing takes place in the book, with living maps and entire battlefields rising out of the pages. It’s an awesome sight and a great way to frame the game, and fortunately it’s wrapped around some very promising tactical gameplay. 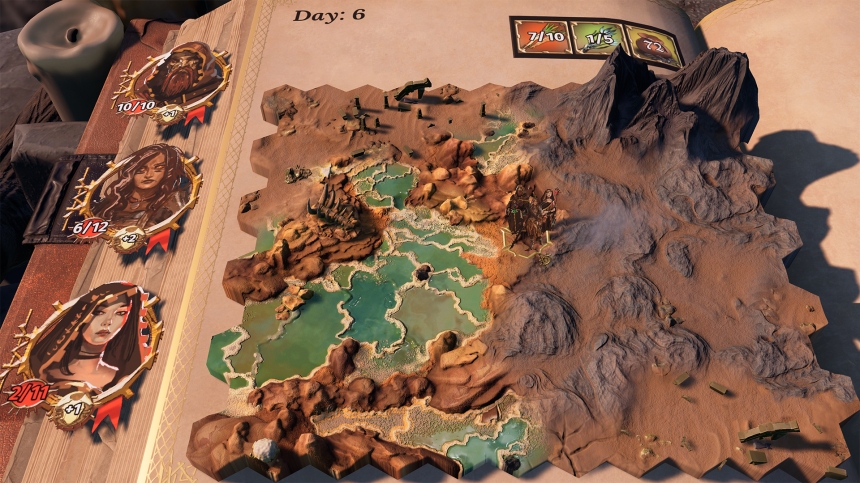 Trials of Fire is set in a fantasy world where the elves (it’s always the elves) have triggered a world-ending magical cataclysm. The planet is dying, ratmen and molten beasts beset the survivors, and there’s little hope for salvation. The game is designed for modular adventures in this setting, though only one is available at the moment. In this tale, your settlement is on its last legs but there may be a powerful elven gem that can restore vitality to your land. Taking a team of three hardy souls, you must set off into the wilderness on an odyssey to find it. In your travels you’ll explore strange ruins, stop at other settlements, and do battle with bandits, monsters, and other denizens of the fallen world.

There’s two distinct layers to the game, the adventure layer and the combat layer. When you are adventuring, you find your party on a vast map of the wasteland, divided into hexes. An arrow points the way to your next story encounter for the main quest, but you’ll stumble across plenty of points of interest along the way. Each of these is a text encounter, describing scenes of carnage or mysterious tunnels or towns besieged by raiders, and then offering you a choice that could lead to battle, rewards, or unexpected hardships. You’ll have to keep up with your food supplies as you travel, as the land doesn’t sustain much life anymore, as well as fatigue if you go too long without resting. There are other considerations like managing your equipment and buying and selling goods, but this should all be quite familiar for adventure fans.

Obviously the other layer is battle, and this one is pretty unique even for a turn-based system. Your squad and your foes are deposited onto a hex-based battlefield to take turns moving and whacking at each other. However, the only real stat your characters have is their health. Everything else is card-based, and their decks are formed by their class and their current equipment. Each turn, every character on the board gets three cards. Some are attacks, some are statuses, some are movement, some are defense, and so on. Some cards have a Willpower cost, and Willpower is mainly generated by discarding cards. This resource sits in a shared pool for your team, so your ranger can sack all his cards to fuel your warrior’s rampage. Willpower can also be used to move or defend if you have no movement or defense cards, but only for the character that generated that particular point.

This means that, to get anything done, you have to decide who on your team has the most useful actions that turn. Part of this is going to come out of the deck building and how many useful cards you give them access to, and the other part is going to be hard choices in the heat of battle. Several status cards generate Willpower under certain conditions, but you have to take the time and Willpower to set them up. Combined with the many status effects you can inflict and combo attacks you can trigger, you’ll have plenty of tactical options and decisions to make in even the simplest of fights. Health is persistent between battles as well, and is mainly healed by resting so exercising caution is important too. Fortunately the lower difficulties give you lots of leeway to learn and experiment without murdering your team.

A single run of the current scenario takes around two hours, longer if you like exploring the randomly-generated map and events. The battles are taxing enough on your wits to make it feel longer, and the story bits are interesting enough to hold your attention. But it’s easily the atmosphere and presentation here that does the most work. The first time you see the battle map rise out of the pages of the book, yellowed and tattered mountains and trees forming from the paper and then filling with natural colors and textures, is extremely memorable. There’s also a ton of effort in the writing and sound design, with the former even having tooltips for more storied terms and concepts. A long road remains for the content of Trials of Fire, but what’s there now is of great quality and offers plenty of fun and adventure. It’s a mashup of a lot of popular systems now, cards and turn-based tactics and survival and roguelikes, and honestly it seems to be doing them all justice so far.