I may have started gaming on my dad’s Commodore 64, but Super Mario Bros. was likely my true awakening to video games. I was right there with the world’s most famous plumber for all of his outings through Super Mario 64, even with oddities like Mario is Missing. I’m not as attached to Nintendo as I was as a child, and while I still love me a good bit of Mario, I never considered how much fun it would be to make Marios. But that’s just what you can do here, across all kinds of game styles and world types. And between the creative levels being produced every day, the equally-creative story mode, and the remarkable details included throughout, this simple builder has commanded more of my attention than titles like Super Mario Odyssey.

If you’re here for a story… congratulations, there is one this time! Mario and a handful of handy Toads have built a new castle for Peach, but that darned Undodog goes and undoes the whole thing. They’ve got to put up a new one in a hurry, and that’s going to take coins. Luckily the lead Toad has a line on a bunch of jobs that pay well enough to fund construction, and Mario’s got time to run through them while the rest of the crew gets to building. Along the way, Mario will run into a number of other colorful characters with tasks for him to take on, which will help further flesh out the castle or just score some new clothes for your Mii, something more valuable than any old castle.

The story mode is notable for being more than just an open-ended romp through around a hundred quality Mario levels. These levels are all designed to show off the kinds of neat tricks and layouts you can make in the builder mode, particularly the features new to Mario Maker 2. You’ll find plenty of courses with slopes, switches, the angry sun, night mode, and other neat bits to build with. Each course is ranked by difficulty and you only need to complete maybe two-thirds to “finish” story mode, so if you’re looking at it like an extended tutorial then you can get your fill of it and move on to the actual making of Mario Maker. Of course, there’s plenty of actual tutorials to mull over too, so you won’t have much trouble getting into the editor.

The real meat of the game is, of course, making and sharing Mario courses. Having never played the original Mario Maker, I was frankly shocked at how easy the editor was to use. I’ve tried bashing content together in everything from Build to RPGMaker and never had as little trouble going from concept to execution as I did here. Constructing a level is as simple as picking a game style of the five available, picking a level theme like desert or airship, picking blocks and enemies from a radial menu set, and slapping them down. There are plenty more options here, of course, like setting auto-scrolling, time limits, changing water or lava levels, or picking special modifiers for blocks or enemies like wings or variations. Some of them can be a little non-intuitive to discover, but nothing in the editor takes long to work out.

That’ll leave you plenty of time to experiment with the frankly dizzying number of interactions possible here. Not content to simple give people the tools of Super Mario Bros. or Super Mario World, the folks behind Mario Maker decided to add new rules to existing objects for inspired builders to play with. Thwomps can destroy some kinds of blocks, POW blocks can knock down coins and other hovering objects, and shells can be worn like helmets to provide entirely new skill sets. You can even compose songs using the special interactions between note blocks and other objects. And many of these tools have been ported to games that didn’t originally include them, like thwomps and P-switches in OG Mario Bros. and airship hazards like cannons and burners in World. 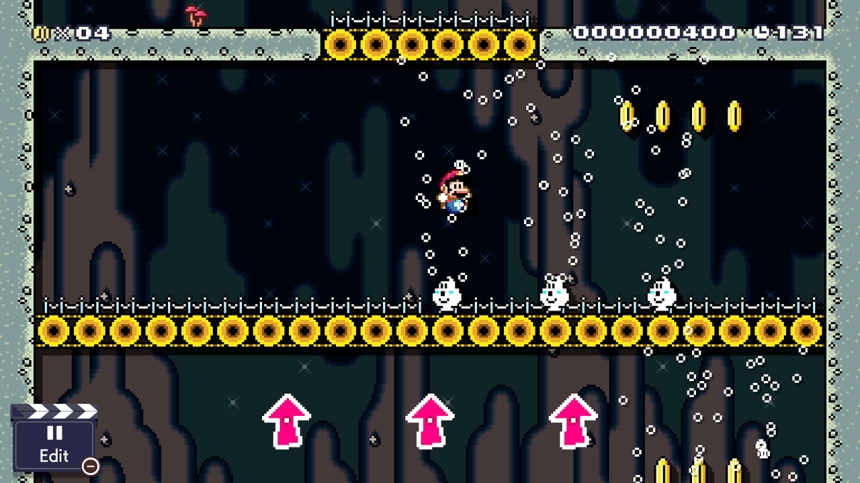 The trade-off for these features is that none of the game types available are actually complete representations. There are some very conspicuous absences from each, which will be very noticeable if you’re trying to reproduce a specific level or encounter. You won’t find spinning platforms or those rotating discs in Super Mario 3, or those purple dinosaurs or P-balloons in World, for example. The fifth game type, Super Mario 3D World, has suffered the worst without basic features like note blocks or even single-block spikes. It’s not impossible for these features to be patched in later, of course, but the big takeaway is that you might have more trouble creating authentic Mario experiences than you’re expecting.

That just means more creative levels from the many makers in the world, and so far they have not disappointed. People have made story-based adventures into lost cities and caverns, approximations of everything from Jack and the Beanstalk to Silent Hill, races, sumo battles, and levels that somehow predict your moves. There are over two million courses uploaded in just the first few weeks of the game’s existence, and while there’s a huge volume of chaff to wheat, a little searching will reveal some absolute brilliance. For uploaded courses there are several ways to search and browse, endless modes that pull levels based on their clear rates, and a hellish, hectic multiplayer mode where you compete against three others to complete courses first. You can upvote or downvote courses, leave comments in the level itself for all to see, and follow creators whose style you’re particularly fond of.

And if that wasn’t all, achieving different feats in the game awards you outfit pieces for your Mii to wear within the Super Mario Maker 2 menus. This isn’t a game for completionists, though, because some require insane feats of perseverance or literally being the most popular maker in the world. It’s still a nice touch, and very rewarding when you get a new boo hat or animated hoodie. But really the appeal here is the freedom to make your own Mario levels, with as much ease and convenience as anyone could hope for. It’s a remarkable feat, making game design this accessible and this rewarding, and it doesn’t hurt that it uses one of the most popular IPs in the world. You don’t even need to love Mario to appreciate all the potential here, but fans of classic platforming adventures can’t afford to miss this.