It’s getting harder and harder for puzzle games to stand out from the crowd, given how massive a crowd it’s become. Manifold Garden is clearly looking to stand out with its art style, and considering I’ve been following its development on Twitter for years I’d say its a good bet. But this one offers more than just breathtaking, impossible vistas, as I soon found when I gave it a try at E3 2019. While I had only planned on giving it a quick look, I ended up spending more than half an hour engrossed in its puzzles and infinitely looping worlds. 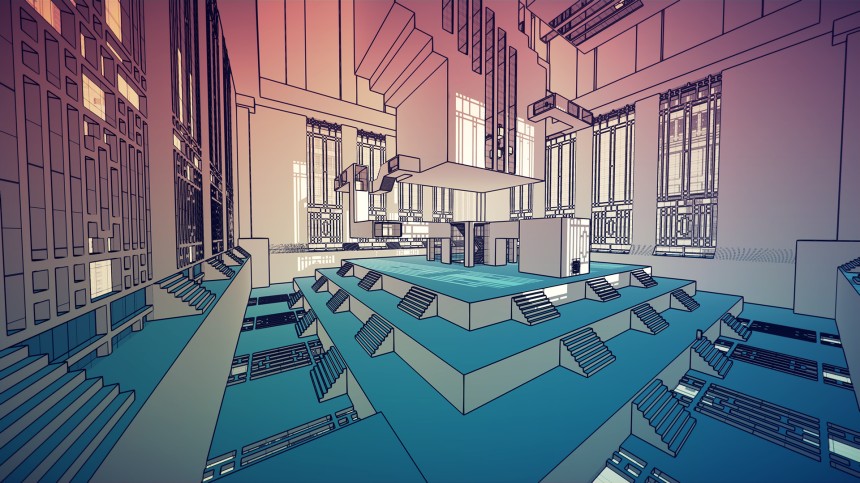 If there’s a story to Manifold Garden the demo didn’t touch on it, but you are cast in a vast world of twisting, looping architecture. Your path forward is unclear, blocked by enormous chasms, distant ledges, and sealed portals. With no tools or weapons at your disposal, your only means of progression is the power to flip gravity. By looking at a nearby perpendicular surface (the distance is pretty generous), you can re-orient yourself with that surface as the floor. This means you can freely traverse the walls and ceilings of rooms, flip the direction of stairs, and work your way around to the underside of platforms if the architecture allows. Playing with this power was enough to absorb my attention for quite some time, well beyond simply solving puzzles by running up walls and turning cliffs into plains.

The art style of Manifold Garden is of course its most striking feature, but also serves an important function to the puzzling. I’ll try not to give much away here because it was one of the more rewarding revelations of the demo, but the infinite expanses that stretch into the background are repetitions of the structure you’re puzzling around. There’s no fall damage and no death for leaping into the void, since everything repeats forever. This means there are some clever interactions you can have with the wider world, reaching out to other instances of your current area if the one you’re on provides no way forward. 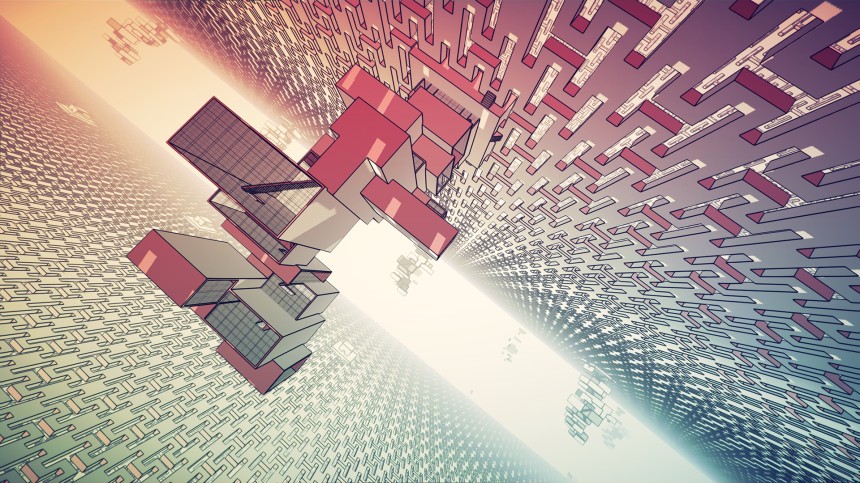 While the gravity manipulation and infinite landscapes provide plenty of reason to scamper about, there’s more to the puzzles than just that. In several of the structures, I found oddly cubish trees growing equally cubish fruit. You can pluck these to use as keys for certain doors or stepping stones in puzzles your gravity powers can’t overcome. However, these cubes have their own permanent orientation, and cannot be carried or manipulated from other orientations. As I wandered deeper into the demo, I found myself challenged more and more to plan moves with these boxes from one perspective while planning for my own movements in several others. It’s a simple concept, but even these early puzzles push the limits of your understanding with how these cubes must be moved in a three-dimensional space.

Manifold Garden has been in the works for years now, and the developer William Chyr is determined to get it out sometime this year. From the modest slice of the game I was able to play, it certainly has the mechanics to make for a unique and memorable experience. It really just remains to be seen what the scope of the full game is, and what story there is accompanying the puzzling, if any. I’ve been looking forward to it for quite some time already, and if anything I have all the more reason to look forward to it now.