There seems to be some sort of curse on games based around Lovecraft’s work. Lovecraft-inspired games tend to avoid it, if titles like The Last Door and Darkest Dungeon are anything to go by. Once a game invokes dread Cthulhu or his ilk directly, though, it has trouble doing the Old Ones justice. Eldritch might have released before this curse was set, or perhaps it side-steps it by not taking the mythos terribly seriously. Either way, it takes what it needs from Lovecraft to make a creepy dungeon crawler, and then goes on to pack it full of colorful action and unexpected hijinks. 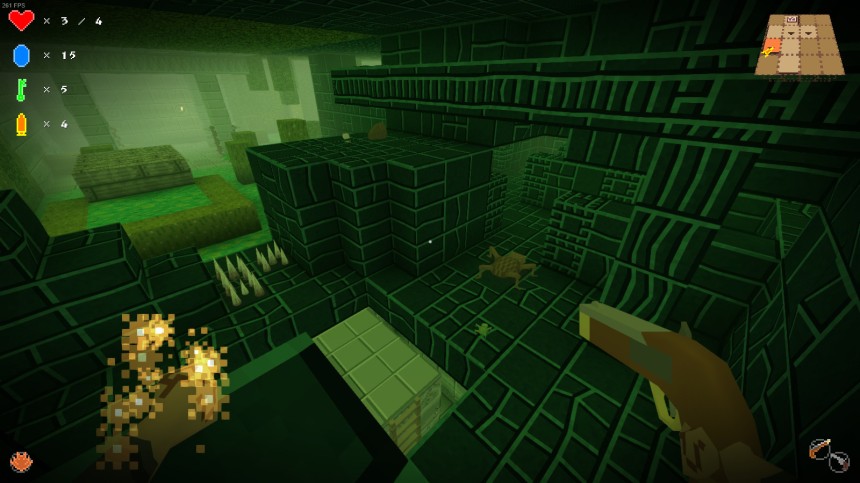 By means completely unknowable, you find yourself trapped in an infinitely-sprawling library. The exit is sealed by three pillars, and three enchanted books hold the keys to their unbinding. These books lead to realms under the sway of great Old Ones like Dagon and Nyarlathotep, their twisting halls packed with bizarre and deadly minions. Luckily there are weapons to be found and artifacts that may give you the edge you need to survive, if you comb the labyrinthine chambers carefully. At the bottom of these dark places lie the keys you need to escape the prison of the library, but that may in turn reveal a more terrible fate in store.

First-person roguelikes were still in their infancy when Eldritch rose from the depths in 2013, but it has a solid structure for randomized adventuring. Each of the book realms is comprised of three stages, and each of those is like a cube of shuffled chambers. They connect in strange and confusing ways, such that the only way down to the exit on the bottom layer is to descend down to the bottom layer, come back up to the top layer in a different area, and then descend again where the exit is. This means treasure rooms and secrets can be tucked away almost everywhere, making exploration key to success. But the need for loot must be balanced against the possible attrition your foes can inflict upon you. 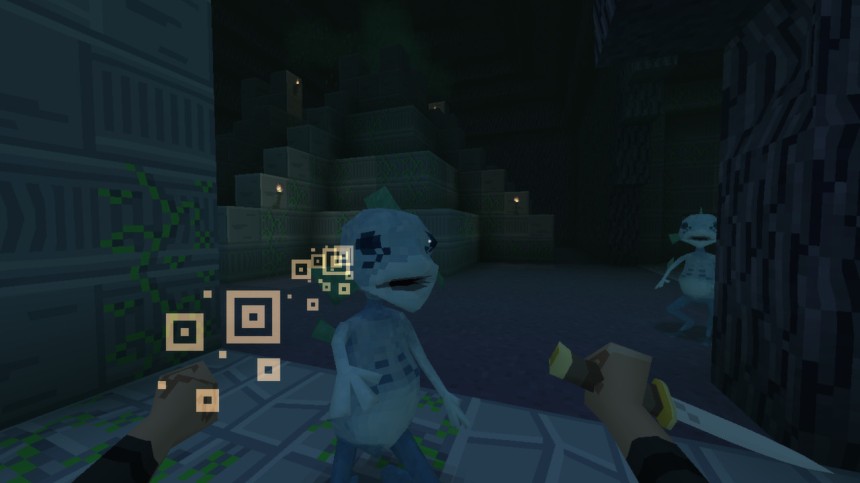 The movement and combat are perhaps where Eldritch diverges furthest from the atmosphere of cosmic dread, but it’s a sacrifice made in the name of fantastic gameplay. The first thing you will surely notice about your character is that she is incredibly fast. Like, Doomguy fast. You might also notice that your foes are, well, not. You do have the option of gliding right past fishmen, cultists, star children, and even shoggoths if space allows. And in the first area you generally can, but in later areas this will be less of an option. Still, your movement speed makes combat a thrilling dance of bullets and stabs when surrounded by enemies, and it also makes stealth not take ages if you choose to use the game’s quite powerful stealth mechanic. There are also items to further enhance these aspects of your character and others, so finding a playstyle that helps you survive eldritch horrors is definitely a consideration.

Actually I have to admit I lied in that last paragraph… the presentation might be where the game diverges furthest from cosmic horror. I mean, you can still do cosmic horror with a Minecraft motif, and there are times when a shoggoth appears where it shouldn’t, or you stumble across a room full of mysteriously dead cultists, and the game will give you a little shiver. But it’s also a bright, vibrant game with low-res textures, the fishmen gurgle adorably, and one of the shops is owned by a pleasant star child with a monocle. The story and setting are clearly Lovecraft inspired, but you won’t be getting much more than a glimpse of the atmosphere found in those macabre tales. Some might balk at this but it’s a good fit, especially when you’re hunting keys to break into cultist dorms and blowing holes in temple walls with dynamite. 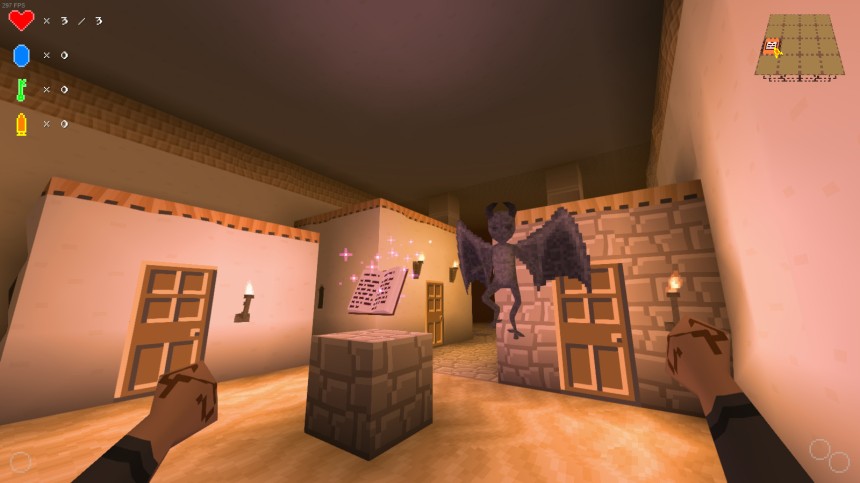 The gameplay is the real star of the show here, between terrain destruction and magical powers like mind control and just the absurd speed of your character. It’s built with all this in mind, too, as you’ll realize when you start facing monsters that can’t be permanently killed and that can catch up to you no matter how fast you are. You’re in for a treat if you beat all three book realms, as the game gets quite a twist and opens up with multiple endings. There are additional game modes, too, one based on At the Mountains of Madness featuring evil penguins and another designed as a time attack run through a twisted asylum. Both modes were added in post-launch patches, and the game is still being patched even now in 2019. For being one of the first first-person roguelikes Eldritch is still one of the best, taking the fun parts of the Cthulhu mythos and mixing them with some rollicking good gameplay.