Cliff Empire made a bold impression when it launched in Early Access last year, featuring stark white futurist metropolises perched atop impossible plateaus. The gameplay offered similarly unique mechanics like in-depth power grid management and inter-city trade, but its potential was still being developed. At launch the interface lacked access to key information, the economy was a pain to manage, and there just didn’t seem to be much to do beyond solving the basic logistical challenges. Now, a year later and several more hours in, I’m relieved to see that all of those concerns have been addressed.

Yep, it’s the post-apocalypse again, this time brought on by nuclear war leading to a permanent radiation layer blanketing the surface of the world. The lucky ones up in the space stations got the bright idea, then, of dropping giant artificial cliffs (or mesas, or buttes if you like) onto the Earth that tower above the deadly fog. You can build rather lovely post-modern cities atop of them too, and that’s exactly what you’re tasked with doing here. However, every cliff has its own particulars in terms of resources, and to cover the gaps you’ll be developing several skyward societies in parallel.

The game starts with you picking a spot on one of your cliffs for a storage depot, which is dropped pre-built and pre-loaded with resources and drones from orbit. From there you have a fairly specific building order (explained by the fairly comprehensive tutorial missions) to get your first city running: You need a power source, residences, landing platform, food and water, battery charger, and portal for selling things back to the folks in space. Eventually you’ll go through most of the production chain and utility buildings in this way, and learn how to expand to other plateaus in the area. There are aspects of spinning up your survivor settlement that don’t get explained well, like satisfying entertainment needs and securing uranium, but the tutorial lands you in a good place to work these details out yourself.

Some of those features may sound oddly specific, and that’s because Cliff Empire has some pretty unique conventions to deal with. Batteries, for example, are used to keep power running in your city when your renewable sources falter. Solar panels don’t work at night, obviously, and wind can change from day to day. If you’re over-producing on power, the excess can be shunted into batteries that keep the lights on, or get used to build vehicles like drones, or end up sold for profit. Drones are how all your goods are moved around, so expanding you fleet from the airport is important as your city grows. They also move goods to the portal when it’s open, so the more drones you have the more goods you can sell per visit.

You’ll learn the basics of these systems, but not the specifics of balancing or manipulating them. That’s left to be found in the buildings themselves, as some structures like town halls and banks have special utility in charting your growth in certain areas. All the needs of your citizens are shown in small graphs along the bottom of the screen, and these graphs play an important part in monitoring your supplies of food, water, iPhones, and justice. Some key aspects of running your city will still prove elusive, like keeping up with your battery supply or managing your economy. The tutorial seems to burn you right through your starting money and expect you to work out what to do next, and after a few tries I think I got it, but again that took a few false starts to suss out.

All of these aspects have been much improved since Early Access, but a cornerstone of the game is experimenting and seeing what works and what doesn’t. Even once you find a good balance of structures and a development style that works for you, there will still be curveballs. Each cliff has modifiers that determine how efficiently you can extract resources like water and construction bits from it, and some of these are hidden until you research the right techs. There’s no innate balance to these stats either, so it’s entirely possible to roll cliffs on your map that are deficient in everything. You can work around this, and it can be a fun challenge, but it adds to the adjusting you need to do in learning this game. Same with environmental effects and disasters, and same with requests from the orbital station. The first big hurdles in learning the game are learning how to build a city stable enough to resist these factors and learning how to not expand past your stable limits.

But that’s when Cliff Empire really sings, when you’ve got your farms running and your pumps pumping and the nuclear power plant making stable power, because then you can start testing the limits of what you can build. 3D printer factories can build consumer goods for your citizens and engines for your drones and zeppelins, the latter of which provide transportation and tourism between cliffs. For more direct travel you build huge suspension bridges that allow trading between cities, which really opens up the optimization possibilities. There are all manner of services to provide your people like health care and entertainment, and that research system that I mentioned can improve just about every facet of your cities, including the poor qualities of a particular cliff. 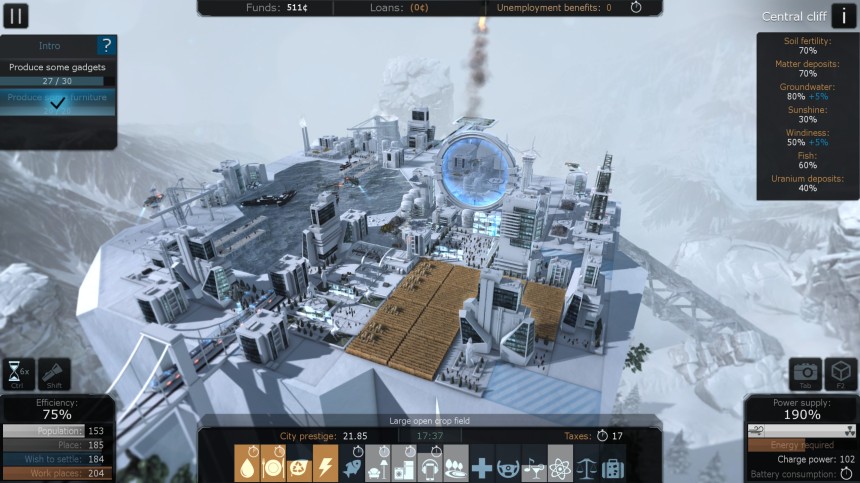 Beyond the learning experience, there’s plenty of potential in finding new optimizations and challenging yourself in more hostile environments. You’ve got endless randomly-generated maps you can work on, and also additional modes like sandbox and tower defense to explore. The latter is interesting, as I didn’t expect any sort of combat or defensive systems to get added to the game, but they add an interesting new dimension to the gameplay if you get tired of crafting cities. Considering how many hours it can take just to get your peaceful cities into stable, prosperous places, having new modes to explore is a real treat.

Overall the concepts are strong and the building has quite a bit of strategy and balancing to it, even after you solve the initial challenges. It can still be tricky to fight the interface to get the data you need, but fortunately that’s the only weak part of the presentation. The art style is an impossibly clean, impossibly white contemporary look that resembles an architectural model brought to life. Coupled with the camera effects you can conjure some striking images, a surreal vision of a sterile tech-heavy society of the future. The sound design is nice and soothing as well, though without anything particularly memorable about it. Still, the presentation and structure of the game very much sets it apart from other builders, and the challenges keep it engaging in ways you might not be used to. Cliff Empire has turned out to be a fine addition to the builder genre, one that offers new perspectives on designing and managing sci-fi cities.