It’s a fact that the biggest titles in our medium are based around fighting and destroying. I don’t know if that’s an indictment of players, developers, or human nature itself, but it does make the non-violent games that break out that much more appreciated. Eastshade places you in a similar world as the Elder Scrolls games but instead of casting you as a one-person army, it establishes you as a humble painter. With that skill and a willingness to help out, a gorgeous, vibrant world unfolds before you in an incredibly gratifying way. In fact, the only thing holding Eastshade back from being perhaps the most engrossing and rewarding open-world game around are its technical limitations, because everything else is simply wonderful.

Your mother has passed on, and her final wish was for you to travel to the distant land of Eastshade. There you will find four landmarks that stuck with her from her youthful travels, and it is these four landmarks she has asked you to paint in her memory. But what begins as a simple journey is complicated by your ship sinking and your fortuitous escape from a watery grave. Stranded on the beaches of Eastshade, it’s up to you to find your place in this picturesque land, using only your wits, your compassion, and your skill as a painter to forge a path to your goal. Along the way you will touch many of the lives that dot this fanciful world, and unravel secrets that have lain dormant for centuries.

There’s no hidden evil or mighty villain here, just your quest to honor your mother’s memory. Your ultimate goal is given to you right from the start, and everything you do will be in service of that goal. It’s fitting for a game so occupied with peaceful exploration and compassion, and it colors the many mysteries of Eastshade as curiosities rather than threats. You can’t simply saunter up to these key locales either, as navigating the world is one of the game’s chief challenges. There’s some very smart gating here using bridges and rivers that directs you to quests that will aid the locals and teach you a little something about Eastshade. Some of these solutions might be a little less than obvious, but that just means you’re going to have to help everyone you see. 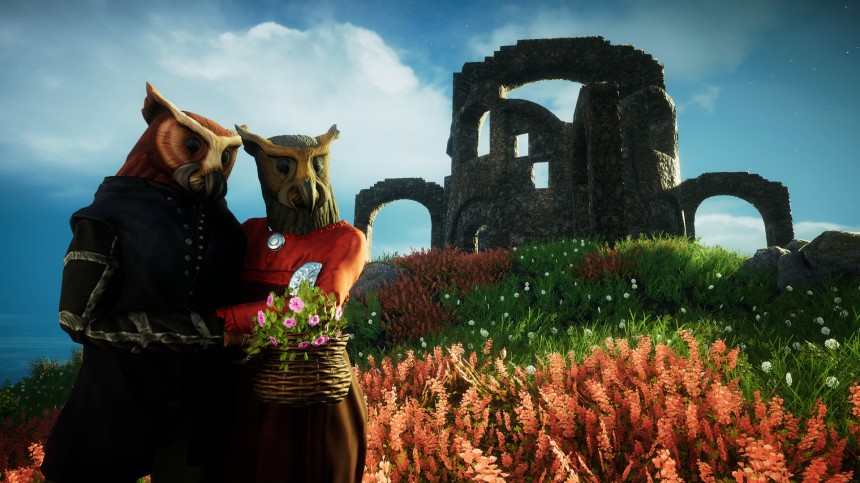 Questing is your main means of progression here, and coupled with the serene walks through the countryside and resource gathering you can engage in along the way the game feels very much like a pacifist Elder Scrolls. Resources like sticks and weeds and fabric all have their uses in crafting useful items and potions, the most important of which are your canvases. As one of the few painters in the area, you’ll often be called upon to paint specific scenes or inspire certain people with your works to complete quests or earn money. You’ll need to craft canvases from wood and fabric to do so, and also expend inspiration, a fluctuating resource you earn by exploring and learning new facts and expend by painting or doing menial tasks. The actual act of painting is as simple as sizing the canvas for a scene and pressing a button, but the paintings you produce have a lovely, hand-crafted look to them and can appear in the world if people hang them up or display them. Plus you can paint literally any scene, like the fool with his head stuck in a jar.

Painting is an important but ultimately small part of what you’ll do in Eastshade. Most of your time will be spent wandering the land, meeting new people, and offering to help with their problems. The dialog allows for some rude or selfish options, but the overall uplifting tone of the game is very notable here. Pretty much all the quests in the game are centered around helping people, bringing them together, and solving difficult problems. You’ll solve curious mysteries, prove the innocence of a reformed scoundrel, bring lovers together, and save folks from nasty tummyaches. All the while you’ll be exploring a land of fantastic sights and colorful animal people to rival any of the open-world fantasy games on the market right now. 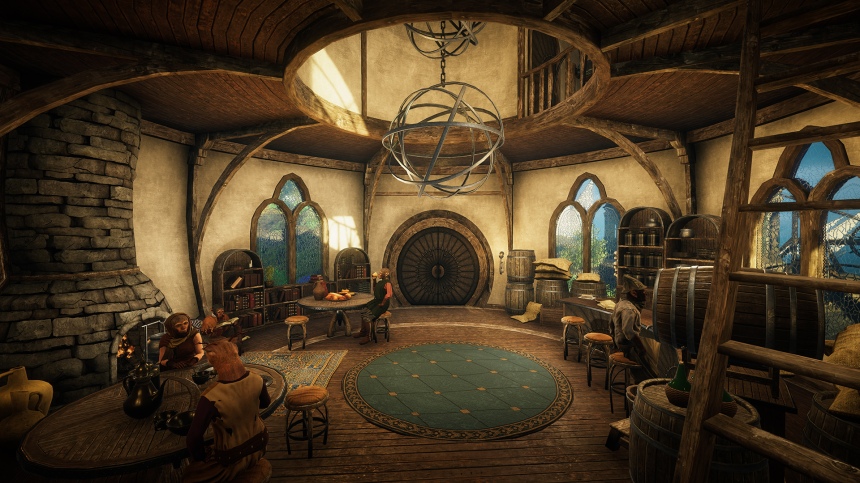 As much as I found myself drawn into the world of Eastshade, there were a few aspects that pulled me back out. The biggest flaw in this otherwise lovely package are the little technical issues that pop up here and there. Despite its lush appearances this is still very much an indie game, and you’ll be reminded of that when birds freeze in the sky or textures pop out of alignment or you find a cluster of bushes floating a foot above the ground. These aren’t common sights but they happen often enough to break the precious immersion the game works so hard to establish. You may encounter some odd collisions and get stuck in particularly rocky places or just on cluttered furniture. And while the overall performance is good, even on powerful systems the framerate can chug at the most unexpected moments.

Now that that’s out of the way, I have to implore you to overlook those little flaws and focus on the bigger, lovelier picture. Eastshade captures all the magic of your favorite open-world romp without a sword or goblin in sight. The first time you visit the towering city of Nava or witness your first eclipse, the very sight will be worth so much more than any monster hunt or loot sack. It’s a world of uplifting quests, fascinating mysteries, and beautiful scenery that you can capture to progress. I’ve played a lot of great games this year but not many that made me feel as warm and content as this one, and that’s got to be worth a lot amidst all these shooters and brawlers.