There are a lot of ways to go about making a good adventure, but like any kind of game it should, at no point, be boring. Elements like long, expository cutscenes, pixel hunts for key items, and baffling puzzles can all be re-designed to provide more compelling experiences. I guess no one told the developers of 1953 – KGB Unleashed that, though, because it commits about as many of the mortal point-and-click sins as a game can. And above all, for a game based around a big mystery, it’s just not a compelling enough mystery to solve.

You have been trapped in a secret Soviet bunker during the height of the Cold War. With no recollection of how you got there or what the place even is, you must avail yourself of every option in escaping from your subterranean prison. But as you make your way through the still halls, a greater, more ominous mystery presents itself. Why was the bunker abandoned so suddenly in 1953? What research was being conducted here? And who is the strange voice on the intercom leading you around? If you can wrap your head around the bizarre, arcane puzzles blocking your escape, you might just stumble across the answer.

You might. I don’t know, because I’ve never gotten more than 40 minutes into this game. Let me assure you, I did more in that previous paragraph to drum up excitement in KGB Unleashed than the game itself does at any point. Played from a first-person point-and-click perspective, you must scour still scenes for items and things to use them on to move on to more chambers to pixel-hunt. Sometimes you’ll get a black-and-white flashback to Soviet officers conversing. There are logs and posters scattered everywhere crammed with the driest writing imaginable, possibly accurate to the Soviet setting but hardly a gripping read for a video game. After a few volumes on electrical engineering and radio tuning, you might think the developers went out of their way to accurately simulate the experience of being trapped in a completely mundane office. 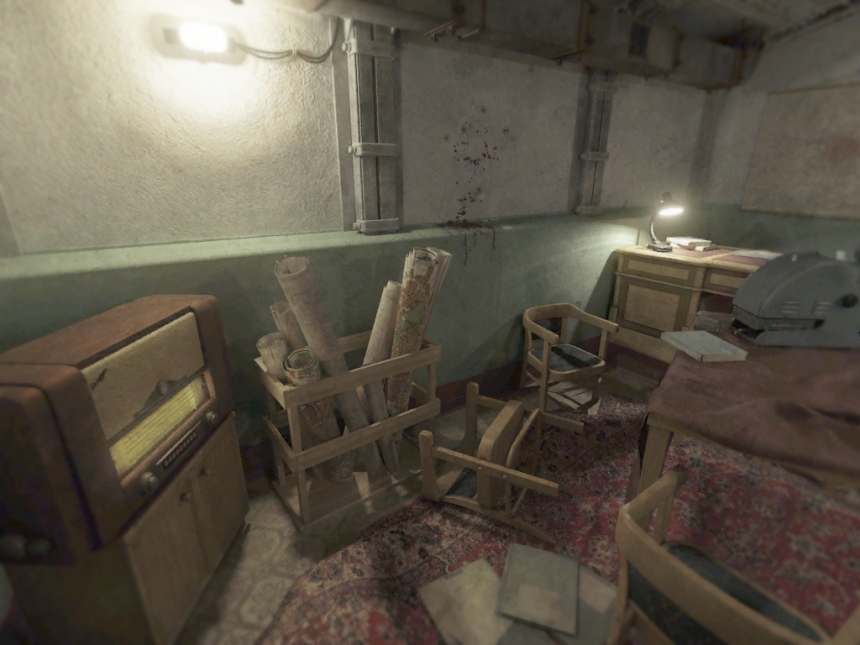 It’s not completely mundane, of course, because there are some decidedly adventure-gamey locks and puzzles to get past as well. My personal favorite is the radio you have to tune to a news broadcast to open a secret passage, but there are also books to arrange on a shelf and projectors to tinker with to progress. The first puzzle in the game is particularly confounding, in fact, because it requires you to find two interactable areas that are at the absolute edges of the screen, right by the indicators for other areas. And they’re arranged such that you can work out the solution to one, but it won’t do anything until you solve both, leading you to second-guess your correct solution.

I’m not going to spend hours running down every flaw in 1953 – KGB Unleashed, because in the end it’s just boring. The puzzles might be interesting for players that love combing over every little detail in a scene, and the presentation does have that classic Scratches look and feel that worked so well for that dark little adventure. But honestly, who cares? The game’s worst sin is wasting whatever atmosphere you could wring out of an abandoned Soviet bunker with boring flashbacks, even more boring notes, and a mysterious voice that shatters your sense of solitude and doesn’t even bother being menacing about it. I don’t know why my dude is stuck in that bunker, and as far as I’m concerned he can stay there because nothing about his escape is even the least bit compelling to me.