Zombie games were well into their saturation point back in 2012, with the undead spilling over into several previously untouched genres. I can remember a time when zombies showing up in an open-world or puzzle games was still a novelty, and Deadlight hit the scene well after it. Still, on its face there’s nothing wrong with another take on the theme, this time a gritty drama draped across several hours of 2.5D platforming. The problem is that this one very much falls on its face in the areas it needs to excel, leaving me more interested in revisiting the original Prince of Persia than this mess. 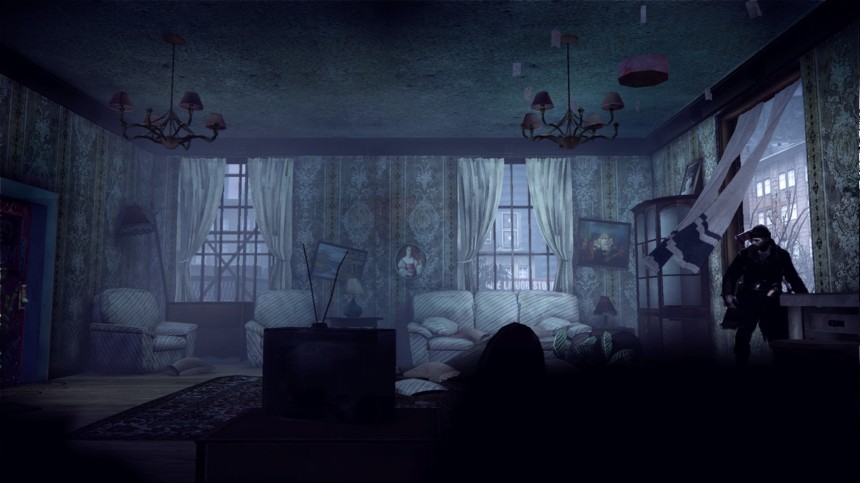 The zombie apocalypse has come to Seattle, and the weary soul you must guide through the chaos is Randall Wayne. Tormented by his separation of his family, he desperately searches for any clue to their whereabouts. He begins this grim journey in the company of other survivors but things quickly go south, leaving Randall to scramble across rooftops and down ruined streets ahead of the bloodthirsty hordes. Not only will his path cross with others who have fared far worse than him, he’ll encounter a darker side of humanity that threatens his fate moreso than even the undead.

We need to stop for a second and establish who exactly you’ll be sharing this journey with. In the long history of bleak horror titles and gravelly protagonists, Randall might be one of the most aggravatingly jaded characters to ever face the undead. He’s introduced with an absolutely cold-blooded act which he never expresses any real remorse over, and immediately launches into gruff laments at his fate, the fate of the city, and so on. Randall never stops grousing, never lightens the mood with a joke or human observation, and never focuses on anything besides his torment. He’s an utterly static character of the worst, most abrasive type, and even in a platformer where narrative missteps can often be overlooked he brings the entire game down.

But don’t worry, Randall is hardly the only misstep Deadlight makes. I mentioned OG Prince of Persia earlier because it’s a close analog to the platforming here, a stiff, technical affair that has you spacing out jumps and mantling up ledges with ponderous precision. The first of the game’s three chapters makes the most of this design, giving you ruined buildings to carefully navigate and choked streets to dash through as the zombies gather to overwhelm you. Once you end up in the underground, though, the game goes hard on the traps and puzzles, forcing you to make precise jumps and quick reactions or end up speared, smashed, or drowned. And if you make it through that and back to the city, there’s an attack helicopter sequence you’ll be expected to execute perfectly or face instant death over and over and over.

Doesn’t sound like a lot of zombies in there, does it? Again, outside of that solid first chapter, your primary concern isn’t even going to be the undead. There are some decent systems for dealing with them, like shoving, melee combat, and even a little gunplay. But they all fall by the wayside in favor of escape, and they fall even further away once the game goes hard on the traps and other enemies. Honestly you’ll get more of the zombie apocalypse flavor from the various collectibles you’ll find laying around, though you’ll also have to sit through more of Randall’s grumping every time you snag one. In terms of atmosphere the game is solid throughout, but ruins it with overwrought drama and a shift in focus away from what should be the stars of the show, the undead.

In the end, none of Deadlight’s parts really come together to form the game they should. On the one side, you’ve got great graphics for the time, interesting levels, a pervasive atmosphere of dread, and some solid systems for dealing with the undead. On the other side, you’ve got stiff animations, annoying traps, crap writing, and hardly any time spent with the undead. Everything Deadlight does well is hamstrung in some way, and the flaws only get more apparent the further into the game you go. It wasn’t a particularly novel or quality game when it came out, and apparently the more recent remaster didn’t even do that much for it. At this point, there are countless other zombie games you could spend your time on, and they won’t have Randall bitching at you so by default they’ll be an improvement over this.