This game was selected as one of our September 2019 Reader’s Choice Reviews. Learn more on our Patreon page.

There is a painfully fine balance that roguelikes have to strike, which other games can generally gloss over. Because of the permadeath aspect, roguelikes have to ensure that the progression and variety experienced in each run is satisfying enough to survive being run hundreds or even thousands of times. In general, the roguelikes that go on to be genre classics have openings that never get old, and progression that spins off in all sorts of crazy directions. RAD will not be joining this hallowed pantheon, and it’s not for lack of trying. No, despite the excellent aesthetic and solid gameplay systems, there’s just not that much going on between runs to make slamming through another one all that compelling.

Yeah, it’s the apocalypse, but wait! We’re actually two apocalypses in here, one the standard humanity self-capping and the other quite a bit more exotic. The result is a world being choked to death by radiation and corruption, with humanity huddled awy in decidedly-80s enclaves of car husks and makeshift arcades. The keepers of this place turn to you, one of the hardy youth, to take on the power to purify the taint and carve out a new place for humanity to thrive. Armed with only a sweet baseball bat and your newfound mystic powers, you must set off into the radioactive Fallow, battle strange creatures, and become more than a little strange yourself.

What that amounts to is a top-down brawler with an absolutely stellar presentation. Just as its name implies, RAD is entirely the product of 80s nostalgia, from the mohawks and skate pads of the characters to the heavy synth soundtrack and floppy disks that serve as keys. Even the narrator is the big, bold kind of voice you would hear on commercials or game shows, booming out “MOOLAH” and “DINERO” when you pick up the cassette tapes used as cash. There’s a bright, saturated look to everything that helps make combat pop and interesting landmarks stand out, and the underground is filled with neon to light your way. In terms of looks and feel, this one has everything going for it if you care at all for the 80s.

RAD also has an excellent hook for character progression that I want to highlight for a few reasons. Bashing enemies and finding certain items lets you absorb radiation like experience, and when you level up you get a random mutation. These can be subtle things like developing stronger leg muscles for running or an immunity to toxic sludge. Or it can be a more conspicuous change, like growing an ovipositor tail or a detachable organic boomerang for an arm. Mutations can provide dramatic changes to your capabilities, and these are reflected visually on your character so you can enjoy turning into all kinds of technicolor weirdness as you progress. You even have a few extra avenues for finding mutations, like buying them from a vendor or finding a stone idol in each level.

I know that sounds pretty amazing, but this is also where I first noticed problems with the game. Mutations are absolutely the highlight of progression, but the pacing of them is far too slow for what they are. During any given level you can expect to get one or two mutations through combat if you’re diligent about clearing the place out, plus another if you can find the stone idol. At best you’ll get three organically, but only one might be a conspicuous power boost like a snake head or bone spikes. You need to get a few levels in before your build really gets rolling, but clearing a level can be a 10-15 minute affair. And you’re forever at the whims of RNG to give you something neat, and after nearly a dozen runs I can tell you that it doesn’t happen often.

The core problem holding RAD down is pacing, and its RNG is the chief culprit. In Binding of Isaac or Enter the Gungeon, RNG can determine if your run will be a cakewalk or a nightmare, but either way can still be interesting and varied. In RAD, it determines if your run is going to be fun or not. If you get bad rolls and boring passives, you’re going to be slumming it with the same bat swings for the better part of an hour, assuming your basic bat skills are enough to get you that far. There’s pretty much no relief from the default bat early on unless you get cool powers, and the other progression systems are limited to one consumable you can carry (which is going to be a healing item) and one artifact that grants you another passive bonus. Your most important progression system is the one you have the least control over, and the one you rely on most for gameplay variety.

With that in mind, it should be no surprise that combat and exploration can get pretty tedious. But there are other factors that exacerbate this on top of the progression. Enemies tend to have clear patterns to their attacks that you’ll learn to deal with, eventually executing them with little concern. However, elite and boss versions of these enemies have more health and attack faster, and you have no guarantee of getting mutations that will keep you at parity with them. That means fights with tougher enemies are just longer and more tedious, because you have less chances to attack and whittle down their larger health pools. And again, the RNG can be absolutely vicious if you get unlucky, and not just with mutations. I had one run where literally no healing items dropped in the world until the end of the second level. None! 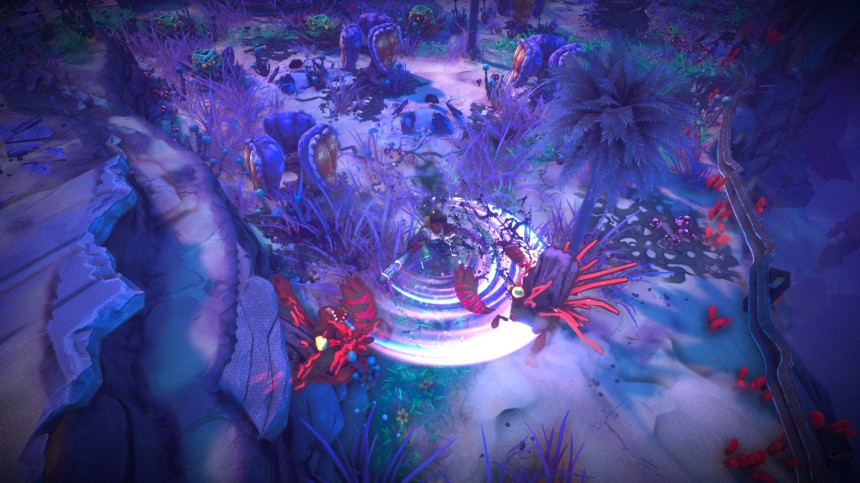 I know I’ve been pretty scathing of this one, but it’s out of love for something that’s not bad, just disappointing. RAD has a huge amount of potential, from its sharp aesthetic to its tight controls. But it needs some serious tuning to get the fun back in sync with the rest of the game. If you get a good run with powerful mutations and lots of healing, RAD can be an absolute blast. It’s just that those runs are rare, and death can come quick if you lose your edge for a moment, and both of those factors can make losing a good run even more heartbreaking. There is fun to be had here, but you have to be lucky to find it, and most players aren’t going to want to sit through half a dozen bad runs for the one good one.