One thing I love indie games for is building small games around single concepts. Bigger, more mainstream games tend to be chock full of ideas and content, but these little titles can be laser-focused experiences. That’s what makes They Breathe so effective, building a short experience around a concept that might not have the legs to carry a longer game. It’s certainly got some grim, twisted parts to explore, and some revelations that I doubt very much you’ll be expecting. It all fits together well enough to be well-worth your time, especially since it doesn’t ask for much of it. 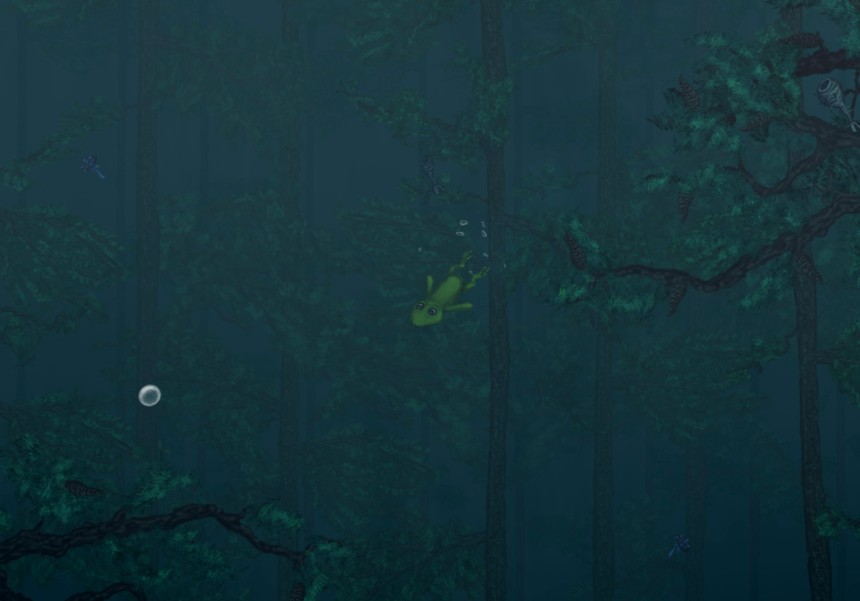 The forest has flooded, with the waters rising far above even the tallest trees. As an adorable little froggy that seems to be the least of your problems, though, because all manner of strange things are floating up from the water-logged depths. Some of them are your fellow froggies, gasping for air and desperate to escape something hunting them. Then there are the strange moose-looking creatures that seem intent on keeping you from descending further. All of you need air to continue your journeys, and there hardly seems enough to go around. It’s up to you to save who you can, survive the more hostile creatures, and uncover where all these terrible things have come from.

There’s a really cool revelation waiting for you on this journey, and if it doesn’t strike you like a bolt out of the blue early on, it’ll make itself known by other means. It’s something that does a great job of playing up the sinister tone of the game, and that tone is paid off to great effect when you finally reach the end of your fateful dive. The backdrop of a flooded forest is unique even now, five years out from release, and only adds to the grim mystery. Really the atmosphere is the big selling point of They Breathe and it’s done extremely well, especially with the hand-drawn art and juxtaposition of your charming froggy against nightmares from the deep.

The gameplay almost feels secondary to the mood here, and that’s partly because of its scope. Your journey into the depths of the forest is straight down, long enough to fill 30 minutes or so but without any exploration from the single descending screen. You’ll stop at several points to battle back the creatures that rise up to meet you, and your only defense is your nimble swimming. All you do is lead your froggy around with the mouse, but with just that you can push allies into oxygen bubbles and bait foes into traps. It all feels a bit loose, and some of the enemies have some rather troublesome patterns, but  you should have little trouble reaching the terrible secret tucked away at the bottom of the place.

They Breathe is a simple concept with a solid execution, and it ends up feeling exactly as long as it needs to. That’s not very long at all, but it’s a moody journey with at least one truly great ah-ha moment to satisfy your curiosity. You’ll even get a nice little selection of developer notes and commentary when you finish it, which helps flesh out the whole concept even further. But really, this one is all about the journey, and it’s one that will surely horrify in ways you haven’t seen before. The world can always use more clever indie shorts like this, so for goodness sake don’t miss out on the ones we have!