At this point I’m convinced that most people judge horror games on an entirely unique metric. There’s a shocking number of indie horror games out there that demonstrate no mastery of tension or atmosphere, yet are embraced by the community. I don’t know if it’s just a matter of having a plausible scare or two or just booting and playing without too many glitches, but the standards seem incredibly low. That’s the only way I can explain Pacify, a game about hunting keys and junk in a bog-standard spooky house while a girl that sounds like a combustion engine sometimes follows you around. I wouldn’t spend my time on that, much less drag my friends into it.

An evil presence haunts the old funeral parlor on the edge of town. Locked within these dismal halls is a young girl with a terrible secret. Her soul is bound to this place, and only you can set her free. Alone or with a team of investigators, you must enter the house, search for clues to what happened there, and complete the ritual that will end this nightmare forever. But the dark forces at work will not sit idly by while you undo their machinations. The very tools you need for the ritual will resist your efforts, and the girl’s terrible secret will prove to be one that threatens your very life.

That’s the setup, anyway. What actually happens is that you bust up into a generic old mansion that I guess could have been a funeral parlor with some heavy redecorating and hunt for the doo-dads that will let you break the curse and win the game. There’s a whole mess of them scattered all over the house though, and you’re going to need around a half-dozen keys to get into all the different rooms of the place. That means the first half of your adventure here is a straight key hunt, unlocking areas in sequence so you can get everything ready. I wouldn’t even call it a very good key hunt, since you’re looking for small, nondescript props in a pretty generic house setting.

Once that’s done you can start collecting the things you need to win. Each one you find will have to be taken to a specific spot for the ritual, but as the game progresses these things will actually start running around the house. Whatever atmosphere you get from the spooky, stormy night and murderchild wandering around is pretty quickly killed by these giggling little streakers. As for the girl, it’s important to note that she has two modes. When she’s calm, she just roams the house silently, bumping into you if she happens to be around. Periodically she’ll become possessed, floating around the house humming like a riding lawnmower and bee-lining towards you if your paths cross. She’s easy to juke around tables or beds, though, and she’s wreathed with some kind of ghost lightning you can see through walls that makes her easy to spot.

It’s possible this game will scare you exactly one time, when you first meet the girl, assuming you run around a corner and she’s right there in your face. After that the threat and mystery is gone, killed twice as hard by the other giggling inhabitants of the house. What you’re left with is a boring key hunt and a tedious scavenger hunt, interrupted by confusing a stiff, unconvincing banshee around a table. Single-player is hardly worth it, especially given there’s one map, one enemy, and one constant objective. You can try multiplayer but I suggest you get some friends because after several attempts I only got into one game, and my team just ran around willy-nilly until the ghost caught up to them all. Multiplayer can make bad games fun, but that doesn’t make the game any less bad. 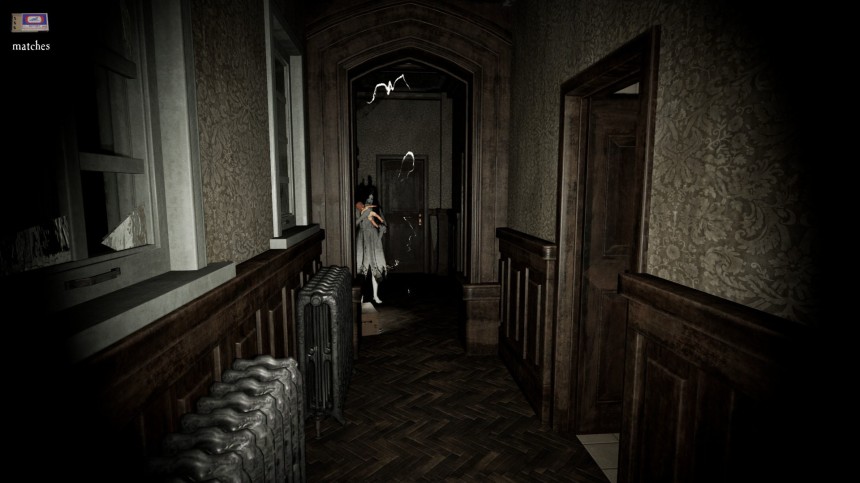 For a one-dev project it’s certainly a fine feat, but one that should be more proof-of-concept than anything. I can’t see myself ever recommending this for any reason, especially with the growing numbers of decent horror multiplayer games out there. The graphics are fine if generic, and the sound design is functional, though I have no idea why you would pick a low, endless growl for your ghost instead of something actually spooky. Even if the action wasn’t boring and repetitive, there’s none of the variety here that you find in similar games. Leave this girl alone in her big old house and move on to greater scares, because this one ain’t gonna do much for you on any level.