All I really want from a horror game is a unique, effective experience, and the indie scene is generally the best place to find it. I’ve talked at great length about my appreciation for strange and international horror titles, and Kalaban certainly tries to elbow in there with its strange B-horror rendition of the Finnish countryside. It felt like just the kind of experience I was looking for, until the bugs started cropping up. There’s a lot I can look past to enjoy a game, but regular crashes can’t be ignored especially in a game this concise. 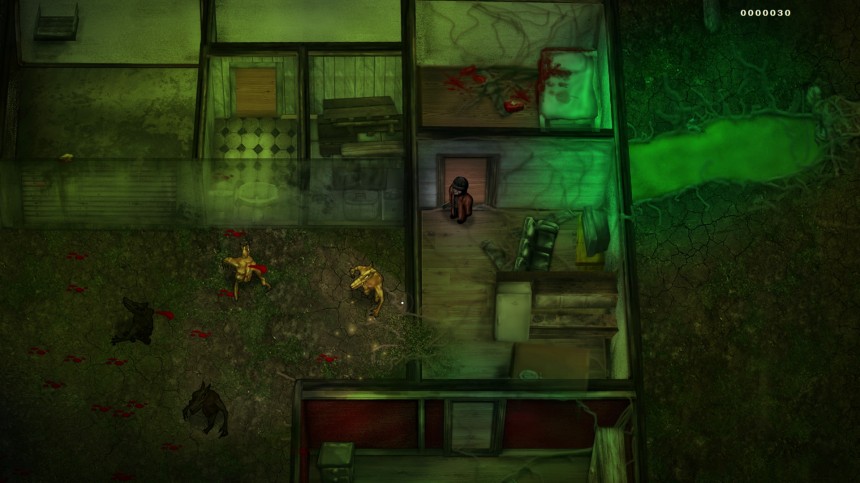 In an alternate 1995, Finland is struggling to recover from a crippling recession. You play Bob, an American ex-pat who’s taken to hermiting on the outskirts of a sleepy country town. All this comes crashing down one night when what appears to be a werewolf busts up into his cabin. After dispatching the intruder with an axe, Bob sets off into the night to find out just what’s going on. He discovers the entire town ransacked by strange beasts, and desperately searches for a way to escape this nightmare. Only by combing the ruins and gathering the supplies he needs can he hope to survive the night.

Kalaban is a simple top-down horror adventure where your biggest objective is going to be finding a car and patching it up to get the hell out of town. There’s a fair number of open maps to explore, houses to loot, and sidequests to complete along the way, which will keep you flush in the food and items needed to keep on trucking through the terrible night. Food isn’t needed to survive, but acts as a long-term regeneration buff for your health. You’ll find keys and other items which allow access to buildings to explore and find more important items for your escape, and the whole time you’ll be hacking away at enemies with your trusty axe to keep them from eviscerating you as they did with most of the town. 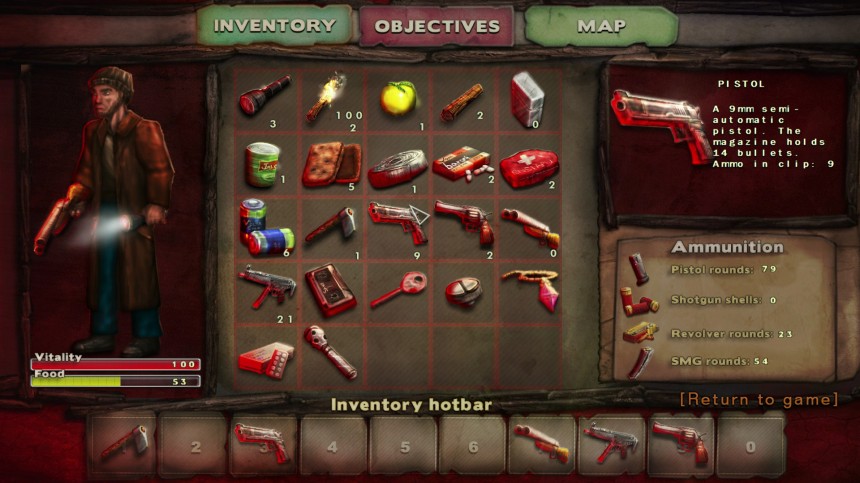 It’s a fine setup for an indie horror game, though it definitely trades more in the kitschy B-horror side of the genre than actual frightful encounters. Bob has plenty of irreverent observations to make about outhouses and corpses, and can be a bit of an asshole when folks he doesn’t like meet grisly ends. I was definitely interested in seeing where the story would go, until the game started crashing on certain scene transitions. It was a consistent problem too, I simply could not move to specific maps without the game dying. I even started over only to find a different, more central map would now cause the same crash. And even when it wasn’t dying on me, I was dealing with awkward collisions, some aggravating enemies, and a general lack of direction that was not being helped by having entire sections of the world off-limits due to crashes.

Kalaban is the kind of game I love to see, a strange, quirky take on international notions of horror, except it literally doesn’t work. I can put up with a lot, but consistent, debilitating crashes are a bridge too far for me. And there are plenty of little annoyances and rough edges throughout the game that discourage the kind of patience needed to put up with bigger technical issues. There’s just too much stacked against this one to ever recommend it, which is a shame because it does feel like its heart is in the right place. That’s not enough to make a winning game though, so hopefully this game or the developer’s next project will show enough technical prowess to be worth sticking with.