If a game builds up your expectations but then fails to meet them, how much of a deal-breaker is that for you? I can often look past such failings if there’s more to the game to appreciate, but huge disappointments are far harder to bounce back from. Scanner Sombre probably didn’t mean to place my expectations where it did, because it has a very clear idea of what it is and the story it wants to tell. But it does purport to be a horror game, and despite the absolutely incredible potential it has to horrify, it does very, very little of that. I can still appreciate what it sets out to do, but man, do I ever wish it did more than that. 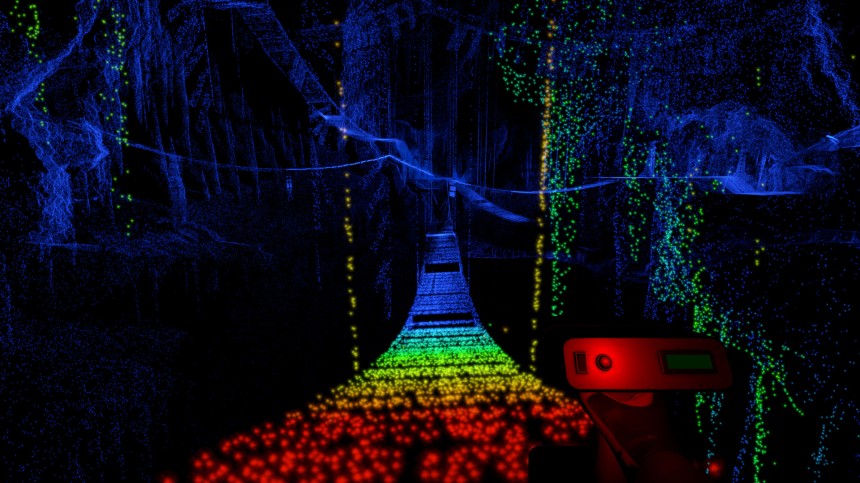 You are a spelunker, rousing at your camp at what seems to be the very bottom of a massive cave system. Everything is pitch black and you seem to have no means of casting light, but luckily you have a tech solution at hand. Using a VR headset and a hand scanner, you can view your surroundings as a heat map of scanned points, navigating by impromptu dot matrix. With tools in hand you resume your explorations, revealing secrets of the cave that mortals have been ignorant to for centuries. You’ll also pick up enhancements to your scanner, which will help you climb your way through more complex sections of the cavern.

Essentially, you can see absolutely nothing in the game until you “paint” it with your scanner. It’s up to you to reveal the many walls, paths, ledges, bridges, and other features you’ll need to get yourself out of this place. As you might imagine this gives the game a very unique look and feel, since you’re only navigating based off of snapshots of your surroundings. The scanner upgrades also go a long way towards extending the novelty of this gimmick, giving you control over the scanner’s focus, granting new ways to map the area, and more. You’ll also find some interesting interactions between the scanner and certain materials that do a lot for the game’s atmosphere. 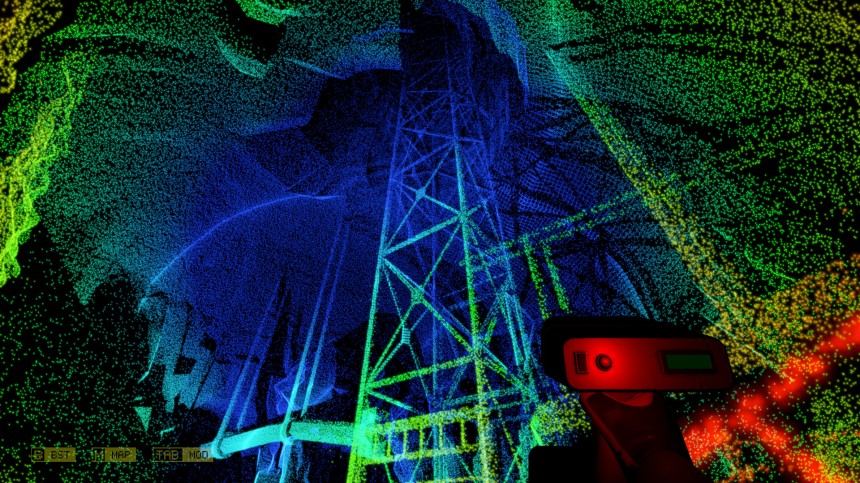 Horror fans in the audience will note that Scanner Sombre follows in the vein of the many sightless horror games that came around over the last few years. These games often engineer terrifying scenarios where enemies can vanish or appear right in front of you due to your sight mechanics, or mess with your perceptions in other ways. Scanner Sombre is obviously poised to exploit these fears in new ways, and to my great disappointment it chooses not to. The early parts of the game were incredibly tense for me because I knew, I just knew that something awful was going to materialize right in the middle of a scan, or start leaving a trail of dots right to me. It never happened, and I am telling you this now so you will not enter into this game expecting any sort of visceral scares.

There are chilling moments in the game, and one particularly unsettling sequence once you see the result of your actions. But the most dangerous thing to you is the platforming, while scares are limited to certain visuals and implications. It feels a bit like a waste of the atmosphere at times, especially as you get on towards the end where circumstances will lead you to feeling even safer. The story at least is a clever little bit of narrative that leaves you some questions to ponder, though it’s going to go off in directions you may not expect. And really that’s a good way to sum up Scanner Sombre, clever but in ways you may not expect. 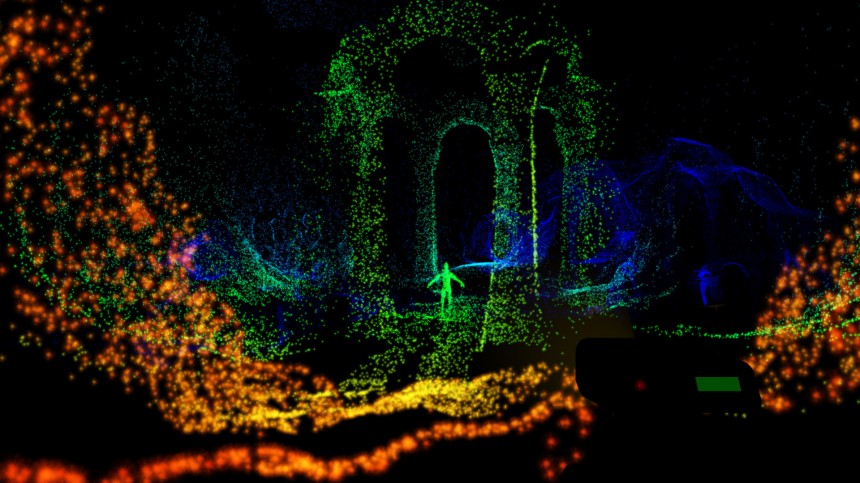 All throughout the game you’re bound to find bits that don’t quite mesh with the others. The story you get is told through very terse, very infrequent text narration which doesn’t do a lot to move the player. The musical selections, while good songs on their own, seem to clash wildly with the atmosphere of the sequences they play during. It’s the proverbial land of contrasts, and to add once more caveat to the package, it’s short. Very short, like just-a-shade-over-an-hour short. Scanner Sombre is hard for me to recommend because of its missed potential and design oddities, but ultimately I’ll still say you should try it. The scanner gimmick is indeed a really good one, and that creepy atmosphere will hold up for at least a chunk of the experience. Don’t bring many expectations on this trip as I did, and you might just escape with a little satisfaction for your trouble.