I might be wrong because I don’t review many racing games, but I feel like it’s easier to review the hardcore racing sims than the arcadey ones. With a racing sim you can look at the accuracy of the simulation and evaluate based on how well it captures the real-world joy of driving. But with an arcade racer, every one of them handles completely differently, and you kind of have to judge each on its own merits. Horizon Chase Turbo, for example, handles even less like real cars than its arcade peers, choosing to mimic the styles of Out Run or Pole Position more than Burnout or a kart racer. And ultimately it’s a wise decision, because this style both helps it stand out from the pack of racers and offer some delightfully unique action. 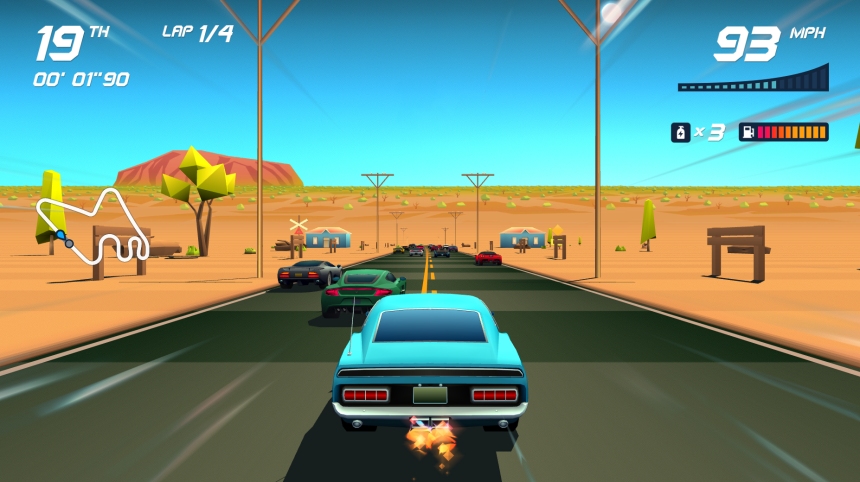 Horizon Chase Turbo is divided into four main modes. The Campaigns is probably the largest offering, presenting you with a world tour of tracks spread across more than a dozen locales around the globe. Playground takes familiar tracks and adds modifiers to them, like different weather conditions or pickups along the way. Tournaments are familiar sequences of races where you earn points based on where you place in each race. I believe Endurance is just different nigh-endless races, but you have to beat either the Campaign or Tournaments to unlock it, and those are both pretty hefty undertakings. There are local multiplayer modes to explore as well, but no matter which mode you pick, though, the core arcade racing is essentially the same.

Campaign will probably attract the most attention, as it has the most depth and variety. Each leg of your world tour has nine races, with a special tenth that earns you upgrades for all of your cars. Scoring first-place finishes in all the races of a locale unlocks a new car for you, as does reaching certain quotas of points from your finishes. Those points also unlock the upgrade races and new locales to progress to, so they’re your main focus in this mode. In addition, every race has blue tokens scattered around to collect, which earn you more points and special trophies if  you can take first place while snagging them all. Races see you facing off against a field of nearly 20 other cars, so a major challenge here is maneuvering between them just to reach the head of the pack. 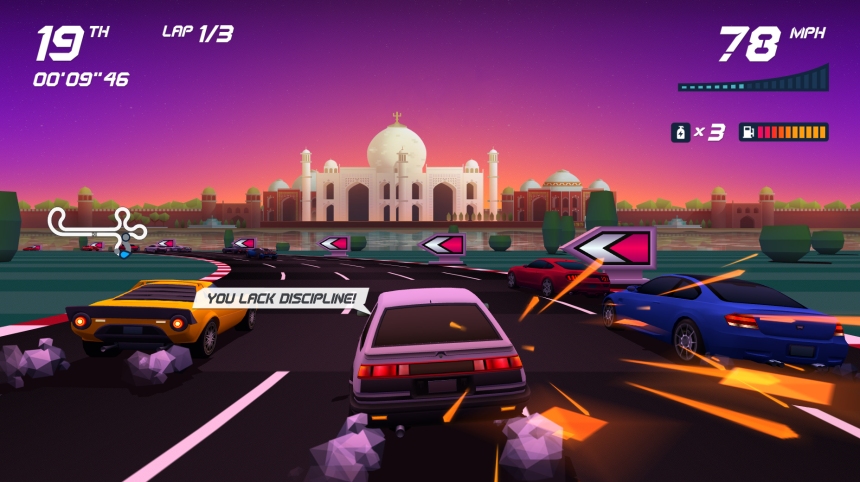 The racing itself is the most interesting part of Horizon Chase Turbo, because as I mentioned it reaches much farther back for its arcade mechancs than most racing games. If you can recall Out Run or Pole Position, you’ll remember that they didn’t model actual racing so much as your car’s position across a scrolling panopticon of 2D landscapes. That’s the core of the racing here, too, as keeping your car on the road while you tear around at top speed is the chief concern. Turns have a completely different feel from simulated racing, as you can take most of them with the throttle wide open and only skid a bit towards the outside. The controls are perfectly tight but the unique way your car handles in turns will probably take some serious getting used to, as will weaving between the other racers on the track.

Without real drifting or tuning mechanics, it might seem too thin a game to really hold anyone’s interest, but I’ve been having loads of fun with Horizon Chase Turbo. There’s enough going on in each race, between navigating the track, negotiating my way up to the lead, managing my limited nitro boosts, and remembering to pick up tokens, that it never ends up feeling mindless or repetitive. The blocky, colorful art style was a good choice for this one too, making all the scenery and cars pop with polygonal life. There’s plenty of variety to the tracks, and even more so when you factor in the different weather conditions. And I’d be remiss in not mentioning the soundtrack, which slaps with some truly memorable synth tunes. 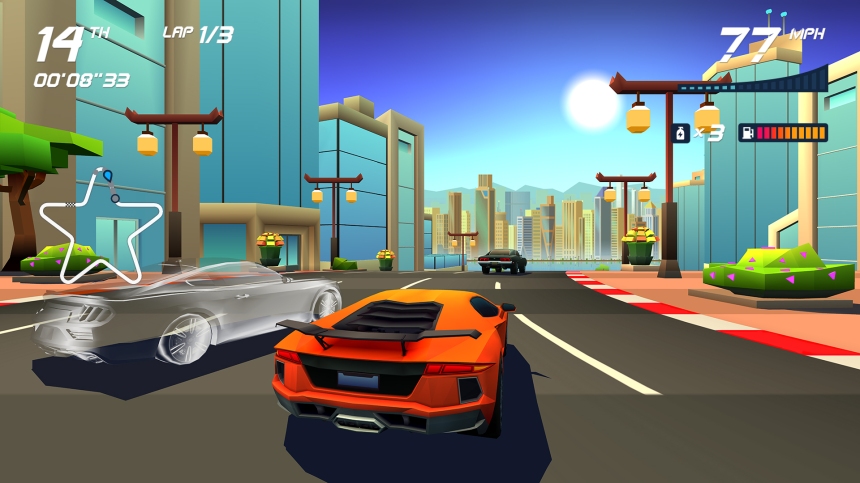 Horizon Chase Turbo is the kind of arcade racer others should aspire to, rich in content and rock-solid in mechanics. Those mechanics will no doubt take some adjusting, being so different from conventional racing, but that doesn’t make them any less fun to master. Learning when to boost out of a curve or slip between two opponents jockeying for first can be a real thrill, and you will inevitably reach races that will push your skills to their limits. With dozens of cars and hundreds of tracks, you’ll have no end of racing here once you come to grips with the style. It’s a complete package, plenty entertaining, and something no one in the market for some quick races now and then should miss.