This game was selected as one of our September 2019 Reader’s Choice Reviews. Learn more on our Patreon page.

More than a few Japanese games have become classics or cult hits because of how ridiculously earnest they are about their premise. Games that go all-in on insane concepts, playing them straight or taking them to illogical conclusions, can make up for a lot of shortcomings with sheer spectacle. Metal Wolf Chaos stands tall among these niche gems, with its absolute commitment to liberating the United States by blowing most of it the hell up. Make no mistake, it shows its age in a number of ways and threatens to frustrate in a few of them too, but meeting this one halfway will reward you with one of the most gloriously gonzo mech games ever made.

Michael Wilson is the duly-elected 47th President of the United States, and the only person left in it who can stop a devastating coup. His VP, the delightfully mad Richard Hawk, has rallied the full force of the military and media to seize control of the nation. But the President has the perfect weapon to reclaim the hearts and minds of Americans everywhere, and it’s a mobile suit with enough firepower to level a city. That’s just what you’ll do, accompanied by your secretary Jody in Air Force One, as you wage a chaotic campaign of liberation across the country. From San Francisco to Boston, no hostage will be left locked up, no tank will be left operational, and no building will be left standing.

The game starts off by dropping you right on the White House lawn, with loads of soldiers, helicopters, and explodable things to shoot at. It only gets wilder once you make your escape from D.C., pitting you against entrenched armies in San Francisco, mech shootouts in Phoenix, poison gas attacks in Chicago, and giant superweapons in New York. You’ll have a variety of challenges to overcome in the dozen or so stages across America but the solution is always bullets, rockets, or both. Levels are loaded with crates and cars and buildings to obliterate with your weapons or mech dash, and often hide ammo or collectibles to help you power up both your mech and your arsenal.

But as much fun as leveling an entire street is, that thrill pales in comparison to the epic tale of betrayal and patriotism you’re getting. The spectacle of some of these levels is impressive, with towering superweapons and massive bosses to bring down. There are loads of cutscenes to build them up, complete with Michael’s indomitable patriotism and Jody’s bloodthirsty encouragement for running commentary. Bosses lament the collapse of American ideals and the betrayal of their cause, while reporters bluster on about conspiracies and fake news to keep the citizenry complacent. And your nemesis, Richard Hawk, deserves special recognition for his Galactus-level devouring of scenery with every voiced line. It’s a glorious train wreck of kitsch and absurdity, culminating in some of the most absurd escalation seen this side of Bayonetta.

Some of the political commentary on display might fool you into thinking Metal Wolf is a more recent creation than it is, but some of the game mechanics are firmly rooted in the early aughts. Like any older Japanese action game, there’s a certain stiffness to movement and a preponderance of invisible walls that you don’t usually get in western games. Levels have no checkpoints, so if you spend 10-15 minutes meticulously clearing the place out only to die on the final challenge, get ready to do that all again. The real frustration here are the bosses, though, which can have instant-kill attacks, awkward weak points, or simply overwhelming attack patterns. Fully half the bosses turned into slogs for me, with the final boss nearly putting me off the game entirely.

There’s a reason for this, and it’s one of the antiquated designs of the game you’ll just have to come to terms with if you want to be the President of this great United States of America (and you do). After each level, you earn money and metal for researching and developing new weapons. Those chunky pods on the back of your mech hold racks of eight weapons, ranging from pistols and shotguns to cluster missile launchers and railguns. Each class of weapon must be invested in to unlock new weapon designs, and then those designs must be assembled with more money and metal to be used. You’ll find some weapons if you search hard enough, and freeing hostages helps you gain more resources in making your own, but this is the main avenue for growing stronger in Metal Wolf Chaos.

Starting out, your machine guns and bazookas will seem rather inadequate for taking down the tanks and fortifications in your way. By the mid-game you’ll have much more functional weapons for sowing chaos, but honestly a straight shot through the game’s missions won’t leave you with the guns you need for the finale. Metal Wolf Chaos expects you to grind, to go back to old missions, hunt up more stuff, and eventually just repeat missions for more money and metal. The gear you get in the final tiers is honestly absurd and intensely gratifying to use, but you will have to grind to get there. Failing to do so only really sets you up for frustrating fights where you inevitably get worn down or can’t beat the clock in a damage race. 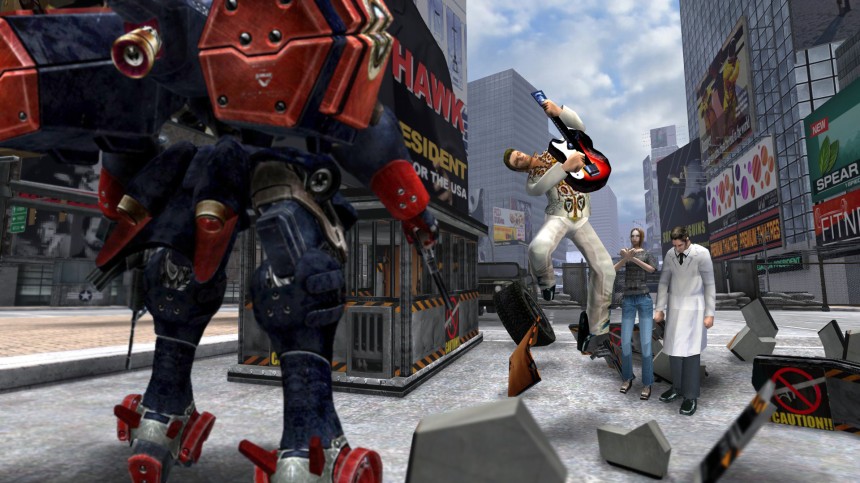 As long as you’re okay with that, though, this game is one hell of a ride. I’ve played plenty of Japanese games but few outside of Revengeance and Bayonetta hit this fever pitch of craziness. And even those don’t have the magical mix of absurdity and American exceptionalism that makes the war between Wilson and Hawk such a treat. Once you accept what the game wants from you, you’ll be well on your way to chaotic romps of destruction, toppling towers and flipping tanks. It might be a bit dated in terms of design and appearance, but Metal Wolf Chaos has heart that not many games can match, and a flair for dramatic destruction that never gets old.