Realizing how specific The Oregon Trail is to my generation was a sobering moment for me. My own kids use Chromebooks and custom learning apps at school now, as opposed to the ubiquitous edutainment programs I grew up with on our Apple IIs. But the concepts pioneered by that pioneering game have not been lost, and occasionally find new life in modern indie games. Suffer some bouts of space flu or the agony of running out of food between planets, and you’ll see some of that in Hyperspace Delivery Service. It’s a simple application of similar principles, with a retro art style and low-key humor to give it the oomph to stand out from the indie crowd. 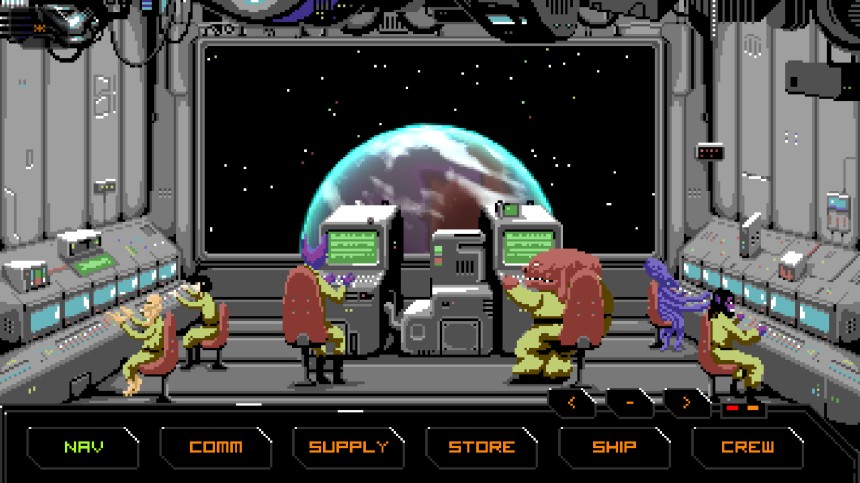 A large-scale effort to colonize the galaxy ended in failure, leaving a string of budding colonies loosely connected by hyperspace routes. The folks on these planets weren’t just going to roll over and die, and so the transport of resources and vital cargo along the network became a very lucrative career for some. You and your plucky crew have just been hired to deliver cargo to Miridian V, the furthest planet out in the chain. It’s a perilous journey under even the best conditions, with food, fuel, and oxygen to worry about on top of mechanical failures and navigation snafus. But the robot pirates and other undesirables along the way are going to do their best to make these conditions as bad for you as possible. Keep your ship running and your crew alive, and you might just make it to your big payday. But if you can’t bounce back from the many, many things that go wrong on your route, you’ll end up as just another derelict to loot.

Hyperspace Delivery Service starts you out with the most important part of any space survival sim, naming your ship and crew. Trust me, naming crew after friends and family makes it that much better when their consoles explode or robot pirates cart them off. You’ll get the full spiel on your job, including background on the hyperspace network, lore on why you won’t be running off with the cargo, and some sweet voxelly shots of your ship. After that, though, it’s down to the tough business of getting that ship from one end of the galaxy to the other. Every jump you make requires you to have enough food, fuel, and oxygen to survive it, but those are just the essentials. You’ll also need medicine to keep the crew healthy, parts to repair wear and tear, and ammunition for your personal and ship-to-ship weapons. There’s close to a dozen resources to manage, with different trade prices to track on every planet. 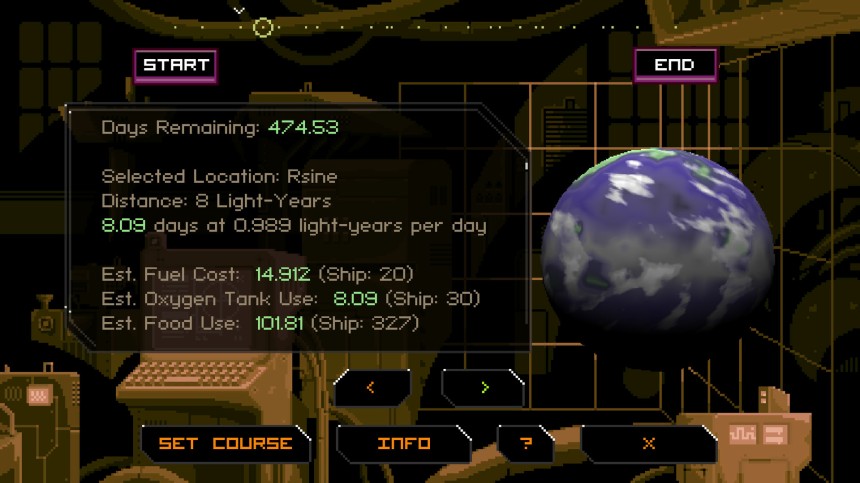 This’ll be your main concern for the majority of the game, keeping your resources balanced enough to make the full trip. You won’t have the money to just top off your tank at every stop, but there are plenty of ways to get supplies without paying. You’ll still be paying in some way, whether it be in other resources, time, or risk to your ship and crew. And that’s your challenge, managing those numbers well enough that none of them run out. It won’t be easy, and will probably require a few failed runs to get a feel for the expectations. Meanwhile, you’ll be facing random events between planets that’ll leave your crew crippled, your ship in shambles, and worse. This is the “dying of dysentery” of Hyperspace Delivery Service, and it’ll test your foresight and emergency planning until you learn where to cut corners without cutting yourself.

It’s not all doom and gloom, either. Beyond playing quartermaster for your ship, you’ll also get to engage enemy vessels in surprisingly satisfying space sim dogfights from time to time. You can send landing parties to certain locations, at which point the game turns into a very simple but fun Wolfenstein 3D shooter. And there’s more, like combing asteroid fields for derelicts and negotiating with aliens for goods and info. Make no mistake, the main thrust of the game is managing your inventory and making tough provisioning decisions. But there’s definitely enough variety here to keep the game engaging.

Ultimately it’s not a very complex game, as most of the difficulty comes from inexperience. Once you learn how to spend your credits and when to scavenge for stuff, you should be well on your way to the final destination. That doesn’t leave as much room for variety, especially in terms of strategy, but that’s when the mini-games help keep things rolling. The retrto aesthetic is used to great effect here, and it’s backed up by solid sound design and a minimalist soundtrack. If you still bear any love for the old Trail games, this one should be an easy recommendation. And even if you don’t, you’ll have plenty of fun rescuing your buds from murderbots and riding subspace shockwaves anyway.