There are a lot of feel-good games out there. There are games that put a smile on your face with touching moments, that warm your heart with intense charm, or simply give you something fun and uplifting to do. Sometimes it’s too obvious what they’re doing, or there are sacrifices elsewhere to keep that cheerfulness going. And then there’s Sayonara Wild Hearts. I’ve played games that made me feel good but not many that were about feeling good, that could make me feel warm and fuzzy through their action, their music, their pacing, their themes, and everything in between. And I can’t think of many that kick this much ass while lifting you up so effectively.

Somewhere in the world, a young woman has had her heart broken. At the same time, the three major arcana that maintain harmony in the world have had their peace shattered by the appearance of a new arcana. With the last of their power, they grant the young woman the strength to stand against the arcana and her allies, to turn back the chaos and return harmony to the world. But the journey will be a perilous one, delving deep into realms of pure concept and emotion. With each victory the woman’s heart grows stronger, and as she approaches the source of the darkness, she might find something else she’s been missing for far too long.

Sayonara Wild Hearts wears its themes on the sleeves of its technicolor bomber jacket, but even if you don’t pick up on them you’ll get them nicely packaged for you by the finale. What this means for gameplay is about two dozen stages that follow the woman’s intense plunge into Heartbreak Subspace, and emergence into the realms of the marauding arcana. Each of these stages is a breakneck rush through vibrant cities, forests, and freeways filled with hearts to collect and dangers to avoid. They’re all quite different in their structures, as well. Sometimes you’ll be gliding through space, sometimes tearing around on a motorcycle, sometimes leaping across collapsing roadways, or drifting in a muscle car, or flying on a sword, or clinging to a stag. 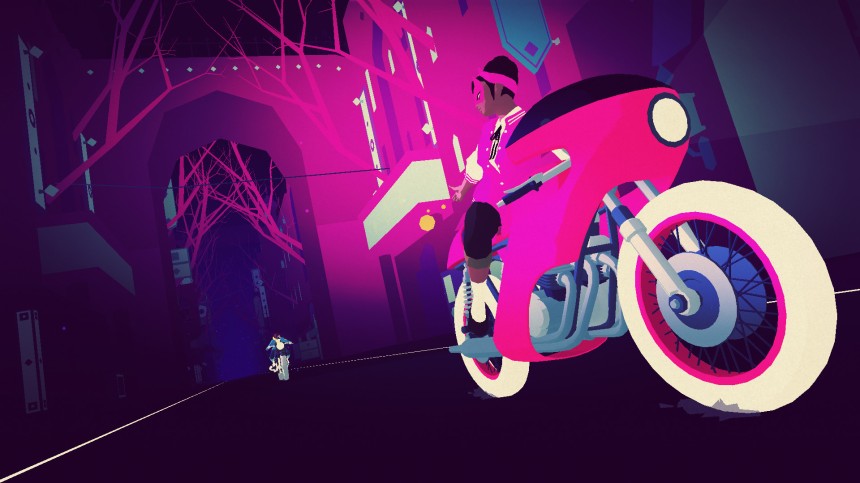 Every single stage of this game is a beautiful cacophony of sights and sounds surging past you in intense new ways. I’m not kidding about the pace, either, because you’ll usually only have a second or less to react to threats. What makes this work is the music, which always syncs with the flow of a stage. Obviously this will be important when you need to time button presses for leaps or strikes, but it can also signal sharp turns or big jumps ahead. The soundtrack is an intense mix of styles, just like the stages, with some marvelously voiced songs for the big showdown stages. Some of them are really quite heartfelt, and once the themes of the game start to connect with you it’ll really click how much of an emotional journey it all is.

I wish I could elaborate on that, but in the end Sayonara Wild Hearts is something you really, really need to experience for yourself. It’s not just the incredible soundtrack or the intensity of the gameplay. What makes this game special is how it builds all of its action and style to an emotional climax that can rival even the best-written games. There’s a message here for anyone, anywhere, that’s all-inclusive and is sure to lift your spirits with its own power and the power of reaching that point yourself. It’s a fantastic way to spend an hour of your time, and there’s plenty more to do like getting score ranks, finding collectibles, and solving the game’s many riddles once you’ve beaten it. But even without those bells and whistles, I’d keep coming back again and again. Not many games have made me feel so much like a superstar, or made me feel as good about it as this one.