Review: Banner of the Maid

This game was selected as one of our December 2019 Reader’s Choice Reviews. Learn more on our Patreon page.

The tumult of the French Revolution offers plenty of angles from which to compose a game, from the political maneuverings of We. The Revolution to the shadowy dealings of Assassin’s Creed Unity. Banner of the Maid takes a rather different tack that either of those, or indeed most any other game set in the period. While the core of the gameplay is familiar strategy RPG scenarios, they’re sandwiched between some dense bouts of visual noveling and a little faction management. It’s an approach that could threaten to alienate either group of fans, if both components weren’t so solid in their execution. And if that can’t hold your attention, the developers felt the need to include some ladies who certainly will.

At the close of the 18th century, France had fallen into the intense grip of revolution. The monarchy had collapsed, the king was on the run, the Jacobins were rising to power… until an uneasy peace settled between the factions. In this alternate France, Louis XVI was not executed, Robespierre didn’t sweep in the Reign of Terror, and the many interests of the revolution continued to grow and compete into the 19th century. Amidst these strange times emerged heroes, the Maids of France, women with remarkable talents for combat and command. The Ecole de Militaire of Paris opened its doors equally in light of this, and produced our protagonist, the young Pauline Bonaparte. As a rising commander of the army and unwilling star of Paris society, Pauline will find herself poised to change the very fate of her nation, and uncover secrets unknown in our version of history.

There are some interesting twists to the alternate history Banner of the Maid finds itself in, but they’re hardly the focus of the story. Instead, most of your time between battles will be spent having little chats with your officers and hobnobbing with politicians. These scenes are fully visual novel sequences, right down to the log and skip buttons in the bottom right corner. They also tend to be quite charming, when they’re not drowning in historical references or fawning over a particular famous figure. You’d better be prepared for some reading if you want to get into the story, slow burn that it is, but you’ll be rewarded with some quirky characters and court intrigues. This being a Chinese game (complete with voice work!), the English translation is still a work in progress on the beta branch but it’s entirely serviceable, if a bit on the machine-translated side. 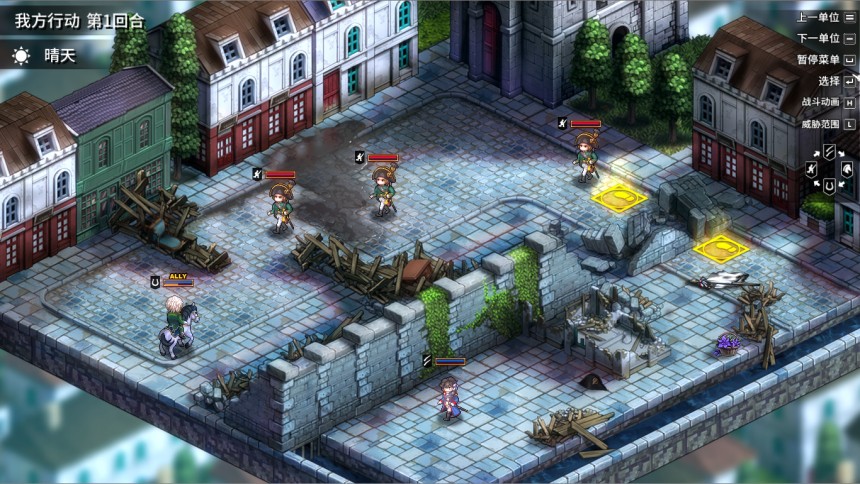 You’ll have a map of Paris to poke around between missions, but this is really just a glorified menu for the different shops and salons you can visit. The many factions of France, such as the Royalists, Jacobins, and Feuillants, can be buttered up through side missions and dialog options to offer you more items and services in their shops, though there’s not a huge amount of depth to this system. Unlocked equipment tends to be straight upgrades, so building your reputation faster also makes you stronger faster. The most interesting upgrades are at the Ecole de Militaire, where you can learn new passive skills for your officers that can have a significant effect on how they play. The side missions themselves also tend to be pretty entertaining, taking a main campaign map and offering a unique new scenario like defeating an army with one unit or stopping a thief from pilfering treasures.

As for the combat itself, there’s not many places it deviates from standard tactical RPG fare, and that’s a bit of a strength. Your units represent entire regiments, with the health being their numbers and morale being a gauge for their super attack. Most units have only one attack, determined by their class, and some kind of buff or healing item you can equip them with. Elevation and facing seem to make no difference, so the focus here is the advantages and weaknesses the classes have to each other. The four main classes, two infantry and two cavalry, can often one-shot units they have advantage over, so battles have something of a puzzle feel where you work to annihilate units before they can even touch you. Unit stats are important as well, with high speed allowing some to attack twice and decent defensive stats rendering units entirely invulnerable to others.

There’s something like 30 missions in the game, each pretty dense with enemies, surprises, and items to find. With a comparable number of side missions and plenty of visual novel encounters between, Banner of the Maid is an entirely worthwhile tactical RPG to sink into. It’s topped off with some excellent art and charming sound design, with a lot of love put into the characters especially. Perhaps too much in the case of some of the women, whose massive, glistening breasts refuse to be confined to the dresses and uniforms of benign society. There’s no sexual stuff in the story or dialogues, and this isn’t a condition which afflicts the younger characters, so it seems that this is part of the modern trend in Asian games to include a bunch of tits in an otherwise normal game to attract something of a wider audience. It’s not the best of looks here, but if you can live with some ridiculously busty characters with suggestions of clothing attached almost directly to their nipples, you’ll find them attending to a very solid game in both mechanics and story.