This game was selected as one of our December 2019 Reader’s Choice Reviews. Learn more on our Patreon page.

To me, one of the trickiest balances in game design is the split between fun and challenge. It’s fun to be challenged, but too much challenge can take a serious bite out of the fun. Stressful games like Dark Souls and Darkest Dungeon have found success by finding players that will accept them on their own unique terms, but that’s not the only way to bridge the gap. I know that now because of Resident Evil 2, a game that can be stressful, terrifying, and incredibly fun all at once. Honestly I didn’t even think it was possible to thread that needle so effectively, but RE2 has the magic touch that can push you to your breaking point and make you love every second of it. 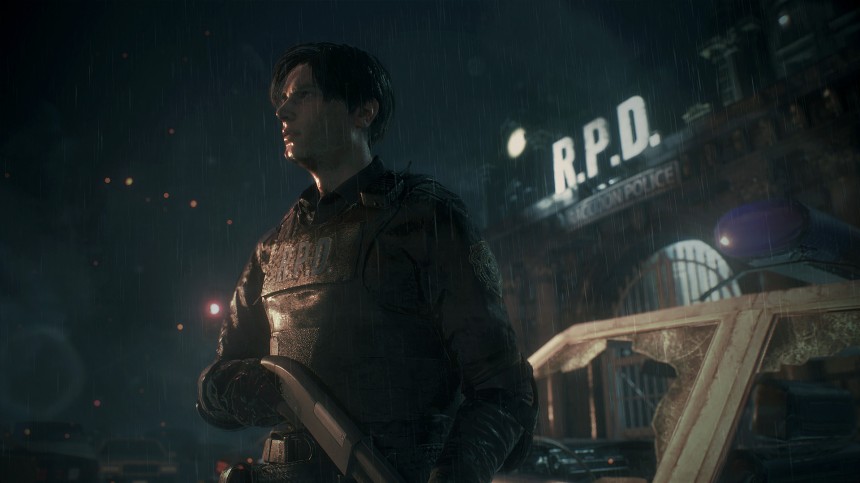 Something has gone terribly, terribly wrong in Raccoon City. A vicious, unstoppable virus has torn through the town, leaving the residents either dead or undying. It’s a hell of a first day on the force for rookie cop Leon Kennedy, and a huge complication in Claire Redfield’s search for her brother. Their paths will cross several times in this chaos, as they search for both answers and escape. The architects of this disaster are still at large, and may be closer than either Leon or Claire would think, along with some shadowy figures who have their own interests here. But there’s a ruined city, a litany of puzzling obstacles, and countless zombies between them and their goal, and it’s going to take a little luck and whole lot of nerve to get through.

For the record, I never played the original Resident Evil 2, and I haven’t even played any versions of the first game in the series. I’m jumping into this with only some basic cultural literacy here, but RE2 is perfectly accommodating to newcomers. The plot is perfectly simple at its core: zombies everywhere, don’t die. I understand there are plenty of references to other games in the details, but you definitely don’t need to study the wiki to shoot zombies and collect crests. Indeed, the quality of the game’s cutscenes and voice acting is so incredibly high that you’ll surely find yourself engrossed in the unfolding drama regardless of your background knowledge. The presentation here does a ton to sell the experience of a zombie apocalypse, and heighten the tension or humanize situations when most effective.

The real star of the show, though, is the action. Following an intense intro that wastes exactly no time getting to the good stuff, you’ll find yourself in a vast police station that’s all kinds of falling apart. Zombies are breaking in the windows, crawling out of the vents, and laying in wait for their next meal. As Leon or Claire, you’ve only got what you can find to deal with them, which includes a very modest amount of weapons, ammunition, tools, and medicine. Your foes in this game are not the mindless hordes you might be accustomed to from other zombie titles, as they can take bullet after bullet to the head without breaking their pace. Every single undead is an existential threat to you, with the potential to take your health from full to zero if you don’t take them seriously. You won’t have the resources to dispatch every single zombie, either, so resource management is absolutely essential.

And this all goes double for the more exotic foes you’ll face as you descend deeper into the mystery! The result is a game that’s intensely stressful every single time you depart from a safe room, that can terrify you simply by putting a common enemy in an uncommon place and letting them do what they do. Your life is threatened here in a way most horror games don’t have the gumption to do, because not only can the monsters kill you, defeating the monsters badly can kill you. Being far away from your save point or stash of items with no bullets or no healing items is terrifying unlike any jump scare or chase scene, and perfectly evokes the true horror of zombie media, that of inevitable doom. That feeling only gets stronger when the game reveals more of its threats, one of which has become iconic in how it heralds your absolute downfall.

Resident Evil 2 is chock full of sequences you don’t want to go through. You’ll see things through windows or on your map that you know will be total nightmares to endure. And you’ll do it, because the experience is so rewarding. The tight over-the-shoulder controls and aiming give you all the tools you need to use every bullet effectively and dodge past foes. Weapon impacts are forceful and meaty, and if you’re any sort of gorehound then you’ll be treated to some top-tier blood and viscera as the bullets fly. Seriously, I have never seen a game that modeled bullet impacts on heads so effectively, and if it wasn’t happening to zombies I’m not sure I could handle it. But getting that lucky shot that splits an undead’s head like a watermelon is all the more gratifying for the absurd explosion of flesh that announces it.

Really, this is about as close as you can get to the perfect zombie survival game, if slow zombies, thin resources, and risky combat are what you’re looking for. And there’s tons of it to experience, too, with the A and B routes for both characters that reveal different bits of the story and offer different challenges. There are additional modes as well, and a fair number of unexpected twists and secrets along the way, all of which should last you dozens of hours to uncover. The only reason you’d punch out early from this one is to give yourself a breather, though, because it’s an absolute master class in turning stress and challenge into pure fun.