This game was selected as a Patron Pick. Learn more on our Patreon page.

It’s been almost seven years since I last played Bastion, but the splendor of the experience has faded little in my mind. Supergiant established themselves right out the gate as a studio that crafted absolutely lush games on every level, from graphics to story to gameplay, and especially in sound design. I didn’t keep up with Transistor or Pyre but Hades was unavoidable for me, hitting just the right notes with its art style and roguelike trappings. And it’s everything I’ve come to expect from this studio, just as singular an experience as Bastion, though in different and yet-evolving ways.

Zagreus, prince of the Underworld, is going through a bit of a rebellious phase. He’s decided to break free of his father’s grip and make his way to the mortal world. Hades, of course, is not one to tolerate such insolence, and has set all manner of grim and infernal forces against him. The road to the surface is choked with specters, beasts, traps, lava, warriors, and legendary figures hell-bent (heh) on keeping the prince in the lifeless lands where he belongs. But not everyone is so keen on seeing Zagreus fail, and in particular the pantheon of Olympus would rather enjoy the headache his escape would cause their brother. Armed with divine weaponry and the blessings of the gods, Zagreus has everything he needs to break free, assuming he can survive the ascent.

Roguelikes really benefit from having a good hook to hang the story and gameplay on, and this is definitely one of the better ones. As a young god, Zagreus’ death merely returns him to the house of Hades, ready to break free once again. The halls of Tartarus and Elysium shift between attempts, giving you a different series of rooms and rewards to choose from every time. There aren’t really side routes or secret areas to take that I’ve seen, but there are some unique characters to bump into on certain runs, and as we’ll discuss it’s absolutely worth getting to know them. The backdrop of Greek mythology also opens up a host of colorful enemies, weapons, and trinkets to sprinkle through the game, setting it apart from more fantasy or sci-fi offerings in the genre.

Right away, you should notice two things that Hades absolutely nails. One is the action, achieved by giving you a fine selection of attacks and an incredibly versatile dash by default. Your attacks interact with each other to form combos and also with the dash to give them more range and mobility, and using these to the fullest will be essential to taking down the hordes of slow, deadly foes in your way. Zagreus can be an absolute blur on the battlefield, constantly dashing, slashing, and bashing foes while weaving in and out of danger, and for my part the game does a fantastic job of keeping this high-speed mayhem manageable. It almost reminds of DOOM in a way, how the incredible speed and versatility of your character is balanced against huge numbers of enemies that will absolutely kill you if you make the mistake of standing still.

The other thing Hades nails is its upgrade system. Roguelikes live and die by the builds you can construct, and Hades gets that there needs to be versatility and a strong sense of empowerment. Every few rooms, you’ll find a boon or two granted by one of the Olympian gods. Boons can modify your regular attack, special attack, ranged cast attack, dash, or provide dramatic passive effects to bolster different aspects of your strategy. Each god has their own theme as well, like Aphrodite weakening foes or Poseidon granting knockback on most attacks. Boons can be found in different rarities, affecting their power and effectiveness, and can also be leveled up to further enhance them. Many of these are designed to compliment each other, even across different gods. I’ve been able to turn a spear spin into a massive, bloody whirlwind that weakens foes, and turn a sort of rifle into a lightning-charged explosive homing missile launcher.

Having tight, responsive action backed up by a deep, varied upgrade system is exactly what the best roguelikes in the genre offer. It’s enough to keep you churning through runs, even if there’s not a huge amount of variety in the monsters and bosses that you face. Don’t get me wrong, they’re all interesting challenges, but they’re not where the real variety of the game lies. Most of your choices in rooms will be based on the rewards they offer, snatching up the many currencies and resources used to unlock new upgrades back in the house of Hades. You can access new weapons, add new features to the dungeons, give yourself permanent upgrades, gain trinkets that provide passive bonuses, and more, all based on what you bring back from your runs. A single run doesn’t take too long to get through, winding through the four extremely distinct areas of the game, and once you learn how boons work and interact, it shouldn’t be too hard to build something that can carry you all the way to the end.

Honestly though, as much as I adore the action and progression in this game, it’s the presentation that really keeps me hooked. I’m not just talking about the art either, though it’s in a class of its own in terms of detail and creativity. No, it’s the characters that are the real stars of the show, each incredibly well-written and expertly voice acted. Zagreus bears a classic dry, sardonic wit of late youth that breaks on occasion when his trespasses don’t go entirely according to plan. His acquaintances range from wise and level-headed to boisterous and silly, and the Greek pantheon in particular has some wonderfully clever takes on the classic deities. More than anything, though, is how relatable all of them come off as. This isn’t some grim epic or intense drama, it’s a guy trying to get out from under his dad’s thumb and running into all their mutuals along the way. Some want to help him, some want to kill him, and some just think the whole thing is too damn funny. It’s a very human cast, and they’re an absolute delight to behold. 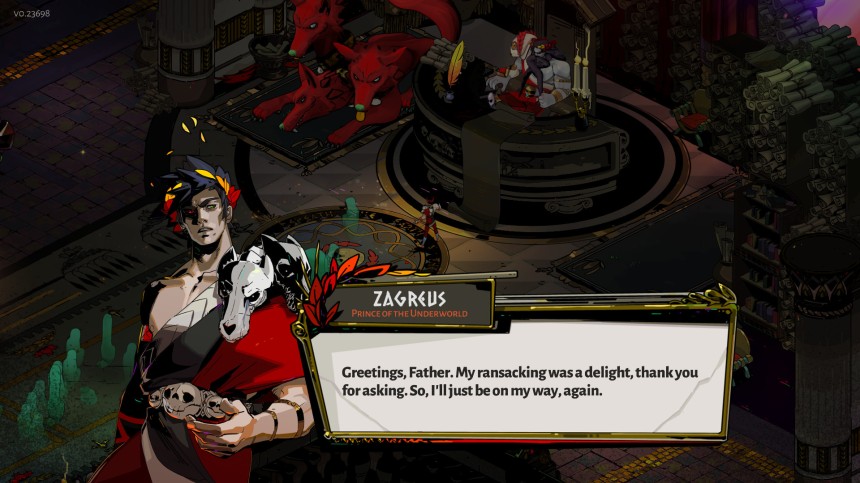 At the moment, Hades is working its way through the tail end of a year-plus Early Access cycle, but it’s more of a complete experience than most games that release these days. You can play a run from start to finish, and unlock a wealth of items and upgrades, and even find some neat one-off encounters. There’s still another weapon to be added and some more story beats, but all the key pieces for a rollicking good time are already here. I’m so glad Supergiant is out there changing things up for each new game and growing at their craft, because as good as Bastion is, this is a clear step up from it. This is a game with some of the best action and progression in the genre, and it’s absolutely worth a try for fans of flashy moves, deep systems, and excellent writing.