In general, I’ve come around to the idea that roguelike metroidvanias are not a good idea. Dead Cells made it work by being extremely light on the metroidvania, and distracting everyone with incredible gameplay. Other attempts I’ve played like Chasm illustrate just how important carefully-designed levels and progression are, because tedious backtracking is always waiting in the wings to kill a platformer. A Robot Named Fight doesn’t really get around this, but has its own distractions in a mess of fun powerups and a tight runtime to make up for the levels. 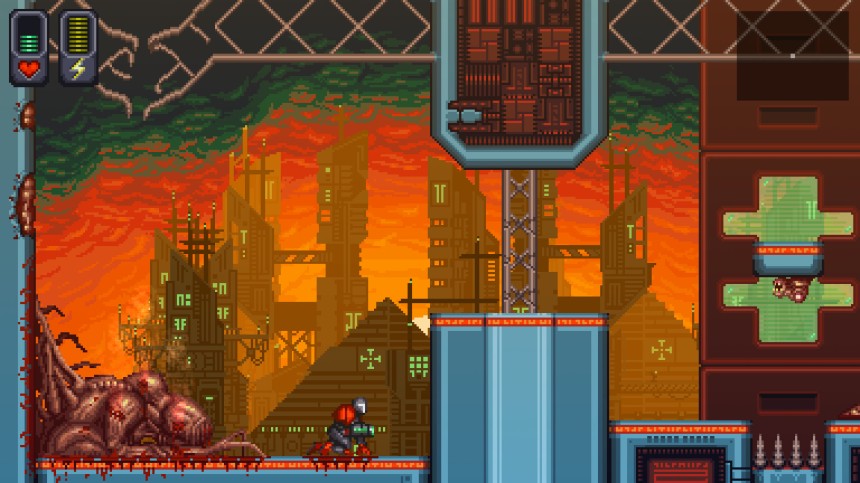 The Megabeast is a moon-sized orb of ravenous flesh, and it has come to devour a planet of peace-loving robots. Rather than succumb to their Junji-Ito-esque fate, one robot has elected to fight. Through the ruins of their once-noble city they must hunt, seeking out artifacts of great and terrible power, while dispatching the vile castoffs of the Megabeast. New powers for their weapon, upgrades for their body, and even new allies will all open up paths that run deeper and deeper beneath the city. In these ancient caverns they may find the power to resist their planet’s doom, but also the truth behind its sudden onslaught.

Your task from the onset is simple: defeat the Megabeast. That’s easier said than done with your dinky pea-shooter, though. In true metroidvania fashion you must scour the map for upgrades to make you a godlike, god-killing machine, as well as the upgrades that’ll get you into the places you need to go. It’s also worth mentioning at this point that A Robot Named Fight controls exactly like Super Metroid. This isn’t even homage, this is a carbon copy right down to the tricky wall jumps and top buttons for diagonal aiming. It’s not even a bad thing, considering how long ago Super Metroid was and how many other metroidvanias have gone their own way, but it’s something to be aware of.

A Robot Named Fight is not a big game, clocking in at around an hour for a 100% completion run. But that’s where the roguelike elements figure in. Each attempt randomizes the map, enemies, loot, and even powerup progression, pulling from a frankly massive pool of possibilities. For one run you might need a flamethrower to reach the double-jump so you can get spider mode, and in the next it could be the dash power unlocking the light armor so you can find the missiles. There’s even variety among similar powers, allowing runs to include high jumps, double jumps, float jumps, or infinite jumps which all accomplish roughly the same ends. One time all my powers ended up being status effects on my main weapon, so instead of finding missiles or flamethrowers I had burning, explosive shots all the time.

The overall progression of a run is pretty constant at first, leading you through the same general areas but with different powers. Finding certain areas or notching a win unlocks new regions you can progress through, with their own enemies and access powers. There are secrets sprinkled throughout too, all passive upgrades to your stats, and all marked roughly on your map so you don’t have to spend ages scouring for completion. What’ll end up taking the most time is backtracking, because metroidvania map generation still seems to be a sticking point for roguelikes. Odd placement of locked doors or twisting corridors can waste your time while exploring, backtracking is guaranteed because of random powerup placement, and the fast travel nodes are borderline useless for all of the above. 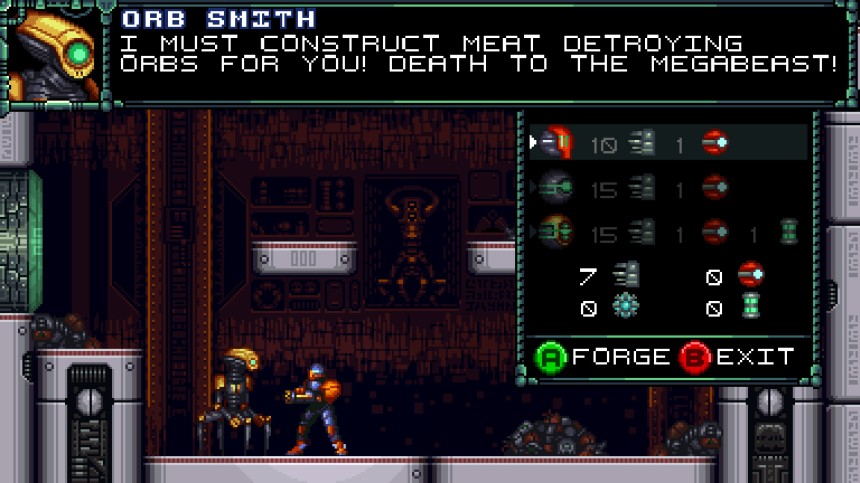 Honestly though, A Robot Named Fight has enough going for it to overlook the weaknesses of the map. The controls are tight, the action is engaging, and the absurd number of variations and unlocks you can get really extend the life of the experience. Story-wise it doesn’t seem like you really beat the game until several runs into it, and there are even some neat twists to discover in the environments. The pixel art presentation is very solid, though a lot of the detail is tied up in the grotesque, bloody depictions of the Megabeast’s kin. There aren’t many options for what’s essentially a Super Metroid randomizer though, so if you’re cool with the map and the gore, you’re getting a unique, satisfying experience here.