I don’t ask much of the really indie platformers, just that they offer a unique or quality experience. You can hang with an amazing game like Hollow Knight for dozens of hours, but I’m just as happy with the wide range of experiences found in the indie scene. What makes MagiCat so special, then, is how it offers that unique experience within a remarkably broad package. And within the huge array of levels and challenges, it still manages to switch things up and keep you engaged. Honestly this one could’ve gotten by just on cuteness and presentation, but there’s a vast game here that’s waiting for you to get your paws on it. 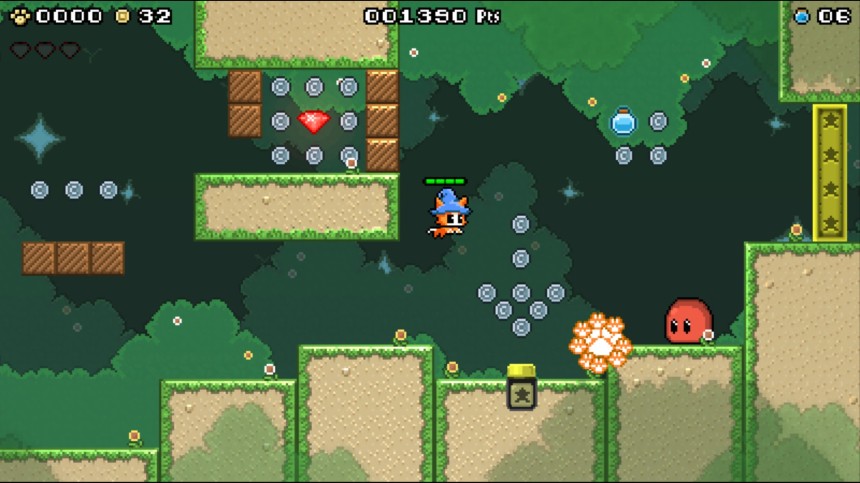 You’re a magic cat, you have a magic gem, and a magic monkey steals your magic gem. That’s the whole plot. You’ll get the occasional cutscene or dialogue with a world boss, but everyone speaks in miaos and squeaks so there’s nothing to follow. This does punch up the adorableness of the game even further, which is already at dangerously high levels with your little peep that summons your attacks and your little kicky feet when you flutter in the air. Really the entire presentation deserves recognition for being such a bright, fanciful 16-bit package. There’s that indie sparseness with details that leave levels feeling a bit empty, but the colors and and clarity of the game really pick up the slack.

In terms of structure, you’re starting at one end of the world, and you’ve got to get to the other. There’s seven worlds of nine levels each, connected by a web of trails and bridges and islands on the overworld map. You can wander this freely to pick up coins and hunt for secrets, but the real treat here is how none of the worlds is entirely linear. All of them branch at least once, allowing you to pick different halves of the world to tackle. They also split into different thematic zones, so you might get a choice between a grim castle or fluffy cloudlands. The shops dotting the land offer new powers as well, some of which allow you to skip around or mess with stuff on the overworld. 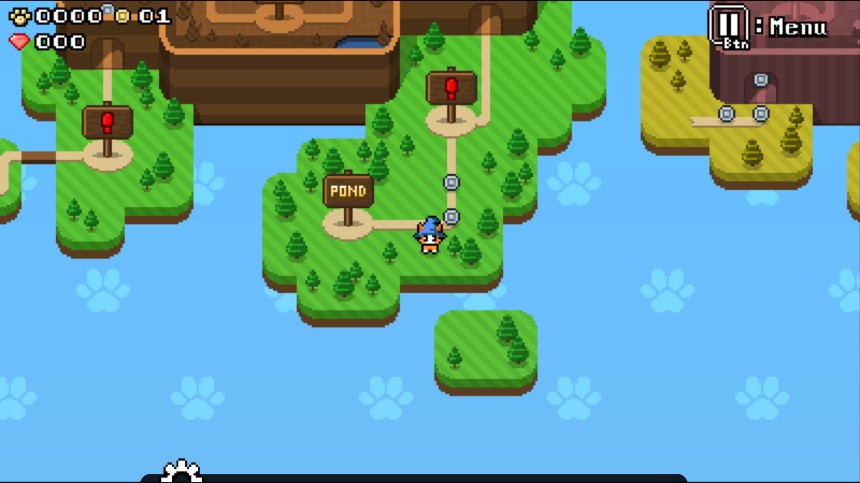 Once you’re in a level, you’ve got a lot that’s familiar and a few unique features. Your enchanted kitty can run, jump, flutter for extra jump distance, and miao at enemies in explosive fashion. Your attack actually arcs, and offers a few angles of launch, so there’s some strategy in deploying even basic attacks. There’s a dash as well, but the uses are limited to potions you find during levels. You’ll find a good two or three dozen along the way, but there are bonuses for not using it, and they also trigger the mid-level checkpoints. That’s right, you have to pay to use checkpoints, and they’re priced such that you may not even be able to activate them all. Levels are pretty short, though, and if you decide to cheap out and then die, you can spend another currency for on-the-spot revivals.

Some might balk at limited dashes or optional checkpoints, but they give MagiCat a really clever sort of custom difficulty. If you like dashing, you can lean on that at the expense of checkpoint security. If you’re frugal, you can trigger more checkpoints. If you decide to live on the edge, you can power through with revivals. Or you can say no to everything and ironman every stage for score bonuses. This system also encourages taking on the challenges to get potions in the first place, giving the game a little added direction. There’s a wealth of challenges beyond this even, with three tricky gems to find per level, time attack modes unlocked after beating a level, and special recognition for beating bosses with no revives and no hits.

All that being said, the game does start out in fairly simple territory and ramp up the challenge hard by the end. You’d be forgiven for thinking MagiCat is tuned for younger audiences in the first world or two, but in the last few worlds it goes full-on precision platforming. Dashes and checkpoints help, of course, but you do need to be prepared for the overall difficulty curve. On the bright side, the game gets very creative with its challenges. You’ll come across all kinds of clever traps and arrangements with switches, push blocks, special powers like becoming a ball, reflecting lasers, and more. They even went as far to stick a boss at the end of every single level, over 60 in all, each with its own attack pattern or gimmick to contend with.

I have to say, I’m terribly impressed with how much quality and creativity is crammed into this budget platformer. I expected a cute, simple adventure, and what I got was a sprawling quest with dozens of diverse levels, bosses, and challenges. It’s still very much an indie game, with simple graphics and something of a weak soundtrack, but those details are easily overlooked when there’s so much more to really dig into. You’re getting a crazy amount of content here, and really, even without that I probably would have told you to play the game with the cute hat-wearing kitty.