This game was selected as a Patron Pick. Learn more on our Patreon page.

Let’s say you wanted to make a rhythm game. What’s the most important part? The music, obviously. If your gameplay is going to integrate with the music, expecting players to bop along with the beat to succeed, you need those tunes to slap. So I’ll make this one easy for you: the soundtrack in Runner3 does not slap. It does not bump. It sucks. I feel like that alone should be enough to condemn a rhythm game, but it’s not even the first thing that turned me off to this one. I even had to revisit the original BIT.TRIP RUNNER to confirm I wasn’t losing my mind, but nope, this third installment of the series is but a pale shadow of its former glory. 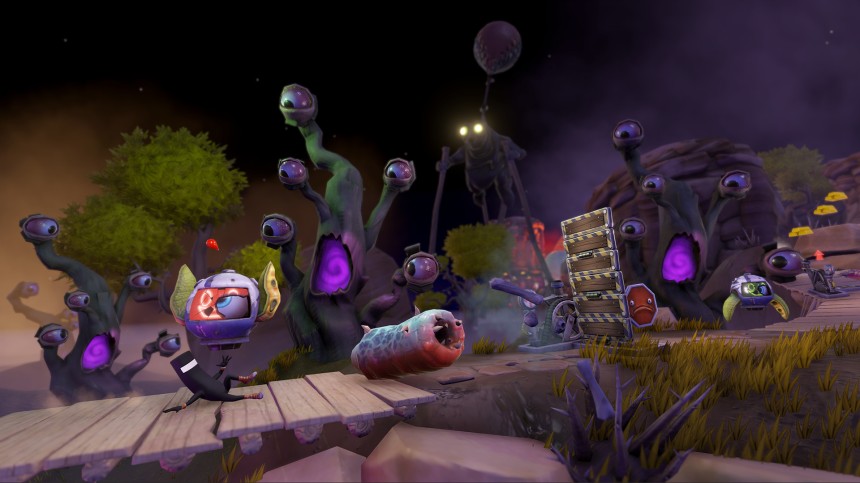 Commander Video and CommandGirl Video have decided to chill for a bit, and nipped off to Foodland to take in the giant tubers, I guess. But the Timbletot is returning to foul up everything good and cool about the world, so the hero’s journey continues for our rhythmic friends. Across Foodland and beyond, you’ll guide the pair in running, jumping, sliding, kicking, bouncing, and more as they traverse courses full of foes, traps, gaps, walls, and worse. All the while you’ll have the music urging you on, with every bounce on a spring and gold bar grabbed adding its own beat to the rhythm. And there’s plenty more to find in each level than just gold, with all sorts of gems and collectibles on the line.

That’s as flowery as I’m willing to get in describing this game, because there’s a lot wrong with what I just said. For starters, I want to reiterate how bad the soundtrack is. Yes, it has a strong beat to help guide you, but the tunes sound like something belted out of a bad flash cartoon. Gone are the bangin’ electric beats of the first game, replaced with cartoon percussion, farts, and slide whistles. It’s genuinely bewildering how bad the music is, and each world only gets like three tracks to share across its many, many levels. Worse than that, though, is how little impact you have on the music with your actions. I’ve never felt like the rhythm was all that important to the Runner series, since the beats fall on things you touch and obstacles you pass, not on the button presses themselves. But in Runner3 there’s less feedback than ever, with really only gold and gems adding anything to the deficient music.

There are problems across the presentation, and not just audio. I really, truly do not understand the art style of this game, or why it’s moved so incredibly far away from the clean pixels and polygons of the original. The clean look of the first Runner helped players plan and time their moves. In Runner3, everything is beset with this grotesque, waxen look of hideous faces and meat. It’s hard to put my finger on exactly what the aesthetic is, but it reminds me too much of cheap parody games cobbled together in the oily, high-contrast forges of Unreal 4. Everything is simply unpleasant to look at, and the scenery often gets in your way either because it’s over-designed or because the camera likes to swoop around at dramatic and painfully unhelpful angles.

Even drilling down to the core gameplay, you’re going to hit rough patches. Levels have confusing alternate routes that don’t unlock until you beat the main route, leaving your trail covered in ugly barriers. There are new flying sections that really add nothing to the game, aside from reminding you that you could be playing a better side-scroller. And a shocking number of hazards come out of nowhere, like meatballs streaking at you from off-screen and a giant octopus randomly deciding to smash holes in your route. I could go on about the lame jokes, the annoying unlock conditions, the brutally unfun secret levels, or how terribly wasted Charles Martinet is, but I don’t want to distract too much from the real takeaway. Runner3 barely resembles the game that put this series on the map, and fails to live up to any of those expectations.