Dying in games is never fun. Some games like Spelunky can make it entertaining, and most games now seek to make it as painless as possible, but it’s still not something anyone wants to waste time on. Super Time Force knows this, and decided that you wouldn’t need to waste any time on death at all. In fact, if you die, you can just fix it! And fixing it will make you stronger! And then you can blow up all the angels or dinosaurs you need to in order to right all of history’s perceived wrongs! Never mind if they’re actually wrongs or not, because the insane, brain-bending action here is absolutely the star of the show.

Dr. Repeatski has made the discovery of all possible lifetimes, a formula that allows for time travel. From there he makes the natural supposition that time is a big ol’ mess that only he and his hand-picked super-soldiers can fix. Thus is born the Super Time Force, a team of gun-totting time travelers out to correct mistakes across history. Of course, these are “mistakes” like the dinosaurs being killed off and Atlantis sinking into the ocean. Not everyone agrees with these corrections either, as the mysterious Dr. Infinity appears across the eons with his army of Blounbots to halt all this temporal meddling. It’s stiff resistance for the Super Time Force to overcome, but they happen to have a few timely tricks up their sleeves.

Those tricks are precisely what make Super Time Force such a madcap adventure. Beyond the bonkers premise, the stages you battle through are pretty standard platform shooter levels full of enemies in awkward places and explosives in much handier spots. You pick one of your troops to control at a time, and while their regular and special attacks are generally solid, they won’t be enough to push back the tides of mutants, dinosaurs, and robots you’ll face. So, whenever things get too deadly (including actual death), you can rewind time, load another soldier, and join the fray alongside your previous attempt. By doing this you can save your last soldier from death, double up your firepower, or pincer enemies in ways you couldn’t on your own. 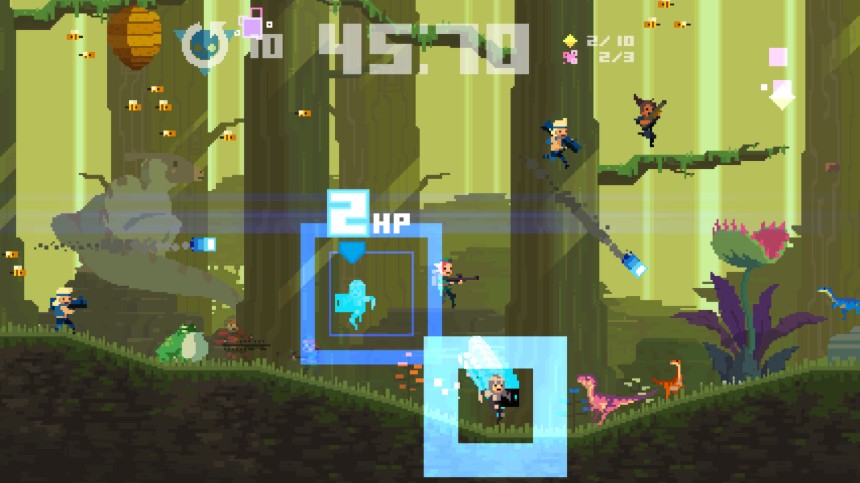 The real kicker is that you can do this over and over and over again. There’s a limit on how many rewinds you can trigger but it’s something absurd like 30, allowing you to keep re-writing the same scene until all of your troops survive and all of your foes die instantly. You also get a bonus for saving someone from death, allowing you to combine their special attacks and take extra hits without dying again. Stacking up character is pretty necessary in some stages because you’ll have a strict time limit that’s essentially impossible without clever rewinds. Bosses also have absurd health pools intended to be melted by a dozen or more of you shooting at once. The utility of power like this is obvious but the sheer extent of what you can engineer is not, and some of the more puzzley bits of levels like trying to snap up fragile collectibles can really push your four-dimensional logic to the limit.

You’ll get plenty of chances to test your wits and reflexes across six eras, each containing something like three levels and a boss. There are more characters to unlock too, and not just conventional soldiers. Salarymen, dinosaurs, and even characters from Valve games will make an appearance, each with their own handy powers of destruction. You’ve probably gathered that Super Time Force doesn’t take itself too seriously, what with its ridiculous premise and journey, but if you didn’t then the writing would pound that point into your face. It’s probably the weakest part of this package, too, because it’s really, really, really trying too hard with the monkey cheese approach. Sometimes you’ve just got to let temporal mayhem speak for itself, without so much additional nonsense. 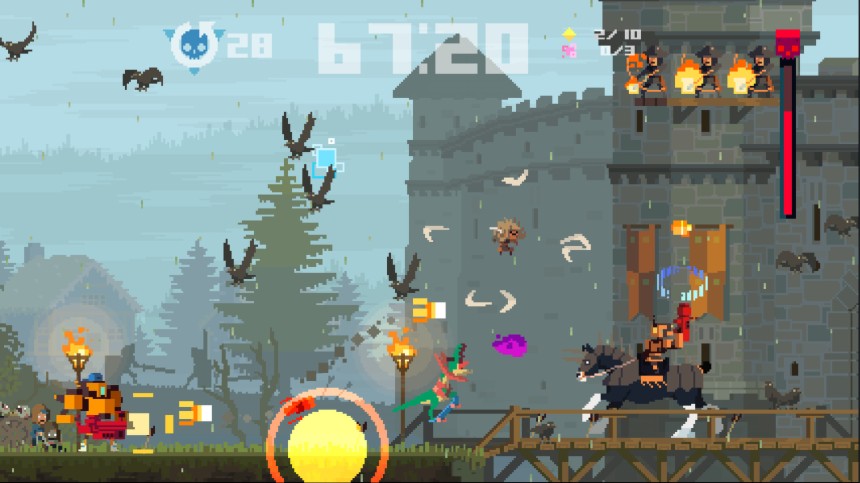 Lame dialog should be the least of your concerns when platforming, though, and Super Time Force offers a unique spin on the genre. The time rewinding is an incredibly gratifying mechanic to master, replaying scenes over and over until you get them just right in a perfect performance of violence. The art style is perfectly evocative for a game as silly as this, and the sound design goes out of its way to really immerse you in the temporal chaos. This is a thinking person’s platformer, with enough challenge and variety to keep you busy for hours, though you’d be forgiven for thinking otherwise from the writing. If you need a new take on temporal action, though, it’ll be a real good time.