My biggest gaming disappointments tend to be titles that have all the appearances of something I’d love, and then are no fun to play. As a fan of pixel art and puzzle mechanics, you can imagine this happens a lot. Sometimes the mechanics aren’t so much fun in practice, sometimes the art isn’t so good in motion, and sometimes there are other unexpected factors that ruin the experience. And sometimes, it’s all three. PONCHO had the look of an absolute gem to me, with wonderfully detailed art and the promise of clever platforming challenges. And then I played it.

The world ended again, this time in a vague Calamity that left only robots to cast about in its wake. One of these robots is our chonky little friend Poncho, so named for obvious reasons. Poncho has something of a great destiny laid out before him, something to do with the Calamity and how the world may be able to move past it. But before that can happen, Poncho has to move past a lot of pits and walls. His ruined world is a tangle of precipitous drops and locked doors, and only by scouring its surface for keys and clues will he be able to find what he doesn’t know he seeks.

At first blush, PONCHO appears to be a 2D collectathon, with you scooting around levels to find red gems and keys. The former of those can be spent at a trenchcoat-wearing robot (whom I assume is named Trenchcoat) to get more of the latter, but it seems most of the keys you need to progress can be found in the wild anyway. What complicates your travels are the three parallaxed layers that stages are found in. Poncho can shift into the foreground and background at will, allowing you a three-dimensional route around pits and walls. This is used to great effect in some stages, once you realize you can platform across layers by shifting mid-jump. 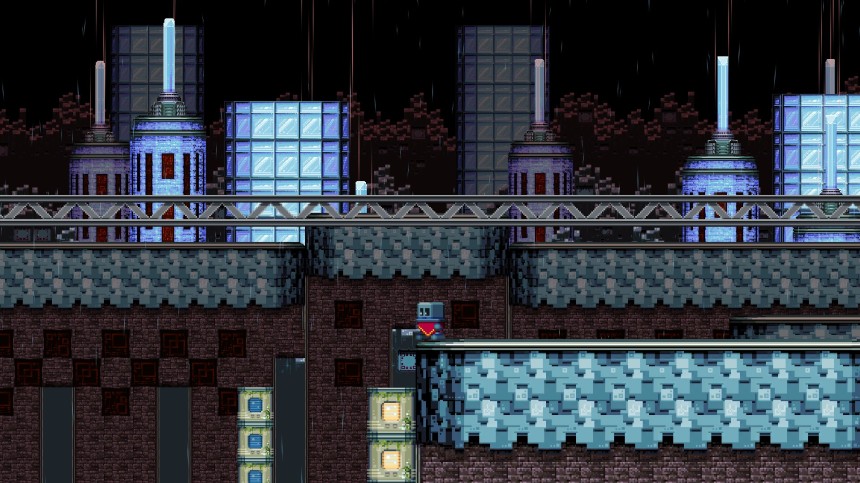 That doesn’t mean the platforming itself is good, though. It wasn’t long into PONCHO that I noticed my controller presses weren’t always being honored. Sometimes my little robot would just keep going after I stopped pressing left, sailing into an abyss. Or sometimes a jump wouldn’t register at all, to much the same effect. Moving platforms had some wonky hit detection that would make the poor dear vibrate or become entirely unable to jump. This is on top of some poorly thought-out levels where the foregrounds cover up important platforms and paths in the background, making it even harder to get around with the janky controls.

Even if you can wrangle your controller to do what you want, PONCHO just isn’t that compelling of a journey. I was expecting something metroidvaniaish or at least open enough to explore, but levels are all this weird in-between thing where you can wander to the left or right to find more baubles but still beat it in just two or three minutes. Along the way I unlocked some new powers, but they really just exist to gather additional forms of collectibles which you then have to replay old stages to get. There’s no reason to explore unless you’re a super gem completionist, and if you are then the controls are sure to frustrate your efforts.

The screenshots might look good, and indeed the pixel art itself is lovely and the environments look great with the parallaxing effects. Later areas are very sparse, though, and the amount of repeat in textures and characters becomes extremely noticeable. I didn’t mind the sound design but that’s not exactly much of an endorsement, as it didn’t add anything to the experience. It’s kind of tragic what a hollow experience overall this one is, with its few bright points marred by a lack of polish and some actual glitches. I’ll never be able to answer the question of who is Poncho, but from what I saw it can’t be that interesting of an answer anyway.