There are a lot of factors that go into making a good game, but there’s one that I don’t hear about very often, perhaps because it doesn’t have a good name. It’s the chaos that arises from getting an insane build in Binding of Isaac going, or the chaos that erupts from grabbing a poorly-placed idol in Spelunky. It’s chaos that doesn’t always favor the player but wreaks absolute havoc on the game world, much to the delight of spectators. This chaotic special sauce can improve the fun factor of just about any game, and titles like Noita that build their action around it come out as some of the most fun of all. 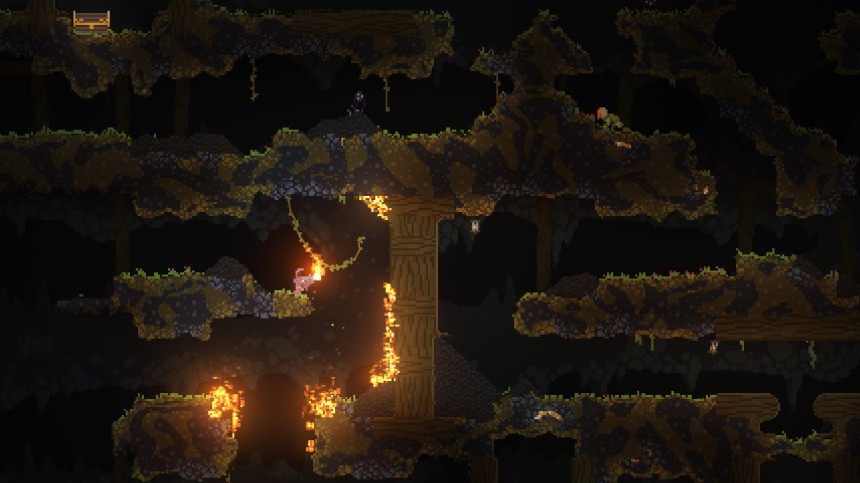 Noita might still be too Early Access for a story, but wizards don’t need much of an excuse to ruin shit. You start your journey at the mouth of a cave, adorned with some very helpful runes that inform you of the controls. Descending into a network of disused mines, you find all manner of zombies, goblins, and gooier things in your way. The first of your two wands will make short work of foes, while the second will make short work of the environment in spectacular fashion. These tools are only the tip of the magical, exploding iceberg, though, as you find grander wands that scatter fireballs, launch black holes, summon acid clouds, ignite everything on the screen, and more. If you can manage to defeat your foes and not vaporize yourself in the process, you might just find what lies at the bottom of these caverns.

Admittedly, there’s not a lot of direction to Noita at the moment besides going down. Each level is a large, sprawling complex of tunnels, shafts, and chambers that eventually lead to a portal at the very bottom. The portal always leads to a temple where you recover your health and spell charges (if any), buy new wands or spells, and get a perk to make your little murderwizard even more murdery. Once in a level, you’ve really just got to survive, and enemies are only half of the threat to your survival. Every pixel of the environment is modeled and is ready to collapse, drain, burn, or flow at the slightest provocation. You can imagine what happens when you drop a lantern into a pool of oil, or blast out the supports for a tank of acid, but watching the chaos unfold is a whole new level of fun, and surviving it is a whole new level of challenge. 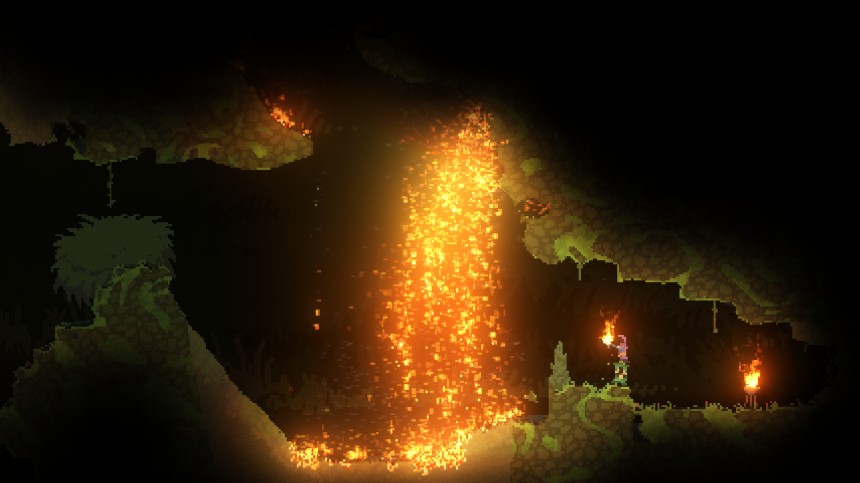 This is the core of the Noita experience, taking ridiculous weapons into ridiculous levels and watching ridiculous things happen. You can absolutely play it safe and cautious, mitigate risks, and focus on reaching the end of the game, and at some point you’re going to want to do that. But honestly the real appeal is finding a wand that fires six nuclear warheads in 0.1 seconds and finding out what happens to the entire level when you push the button. There are wands that shoot lasers, wands that shoot eggs that hatch into flesh-eating monsters, wands that are actually chainsaws, and wands that do all the of the above with each shot. You’ll find wands that do crazy things but they’re really just containers for spells, which you can pull out and affix to other more appropriate wands to make whatever implement of chaos you desire, like burning sawblades that explode into acid clouds.

The catch is that you have to find the odds and ends to do that, and it won’t always happen. I’ve had runs in Noita go absolutely bonkers with wands that could instantly vaporize half the screen, but those are the minority compared to how many runs I’ve played straight with wands that shoot arrows or bouncy balls. Make no mistake, this is a solid roguelike platformer with excellent movement, controls, and combat, but the real magic is left for the RNG to give to you, and it won’t always deliver. And maybe it shouldn’t, considering how potent the biggest, flashiest spells can be, but I can’t deny how many runs I’ve been on where I was left wishing for more bombs or more chainsaws or just that wand I found last time that I killed myself with all too soon. 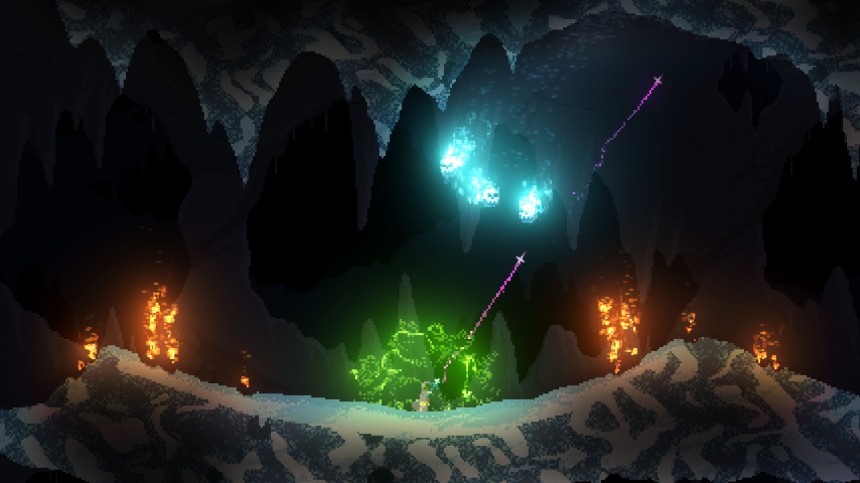 There’s still plenty of ground for the developers to cover in terms of fleshing out the game world and balancing the tools available, so if you’re more in the market for a full game experience there’s no harm in waiting. But you can’t look at the gifs on the store page and tell me that doesn’t look fun, because I can assure you it is. Some of my new favorite game experiences have come from my worst Noita runs, like hucking 4x dynamite all through the ice caves or shattering an entire shelf of potions and rolling in the magical runoff as it enchanted me with everything at once. The potential for hilarious chaos here is at a record high, and as long as the rest of the game coalesces around it eventually, Noita is sure to be a classic.