Review: Tobari and the Night of the Curious Moon

Difficulty is such a funny thing in games. I’ve had hard-as-nails games that I’ve loved, and fairly benign games that I’ve hated, all because of how they’ve posed their challenges. It’s never as simple as something being hard or easy, it’s much more a matter of fairness and pacing. On both of these counts, Tobari knows exactly what it’s doing. From the start this charming platformer will be as inviting and comfortable as any budget indie platformer could be, and over the course of an hour or two you’ll find yourself chipping away at single ice block jumps and weaving through spikes on moving platforms. It’s a game that gets hard, harder than you may be comfortable with, but takes a very thoughtful and often creative route to get there.

Tobari is a magically-inclined schoolgirl out looking for her friend Hina. As the title implies, this is quite a curious night indeed, with all manner of adorable monsters, mages, and spirits running loose and getting in the way. It’s clear something is very wrong, and that closer Tobari gets to locating Hina, the clearer it becomes that she’s involved as well. And it’s not just monsters standing in her way either, as several of their schoolmates are in on these mysterious machinations, and intend to keep Tobari from reaching her goal. Fortunately our heroine has a powerful command of magic, assuming she can pinch spells from her foes, and between that and her nimble platforming skills, she’s got a good shot at unraveling this nocturnal enigma.

For the sake of easing folks into the game, the early stages of Tobari are pretty straightforward platforming challenges. You’ve got a particularly floaty jump and a good clip to your movement, which gives you plenty of mobility for jumping foes and gaps. You can also stomp most enemies, but the better option is to whack them with your magic staff. If they have some kind of magical ability it’ll pop out in the form of a medallion, and taking this for yourself will grant you that power. This can be anything from fireballs and lightning strikes to soaring jumps and a magical hamster ball. You can have two powers at once, and the shops frequently found in levels can sell you a greater variety than you can find for a pittance of coins, so having the right power for the job becomes a major feature of the game. 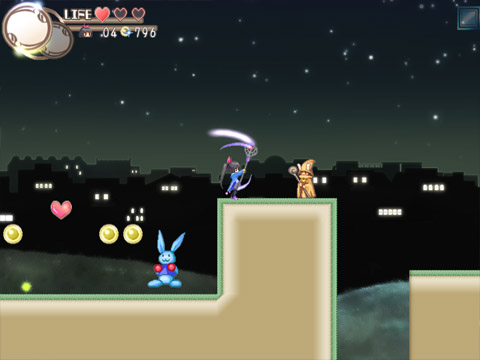 You’ll soon find that stages are more expansive than they appear, once you come to grips with the full extent of your mobility and the options your powers afford you. Nearly every level has alternate paths and secret caches of powerups, and many have entire secret exits set aside from the normal ones. Locating these secrets will be a significant step up in challenge, but it might be worth it because the main game is going to jump to that level too. The platforming in particular grows steadily more perilous across the game’s six worlds, and while the early ones will likely go by quickly, you’re liable to start getting stuck on stages by the fourth or maybe even third world. The difficulty actually reminds me of a Super Mario ROM hack, not the insane Kaizo ones but the ones that offer steep but unique challenges, rather than the more natural platforming of the original un-hacked games.

I must admit that part of the difficulty is in the controls and spotty collisions you’ll start to notice more and more. One feature that’s sure to cause a few dozen deaths is how attacking in midair almost completely kills Tobari’s horizontal momentum. That means if you’re jumping over a gap and swing your staff or cast a spell before you land, you’re probably plunging straight down into that pit. You won’t even notice this in the first few worlds but once the game starts perching enemies on ledges and flinging them at you during tight platforming segments, it’s going to become a problem. Doubly so because the collisions and physics feel very Game Makery, with a fair level of uncertainty baked into every hit and landing. Moving platforms in particular like to warp things around them, sometimes flinging medallions into pits that should have been waiting comfortably to be picked up. 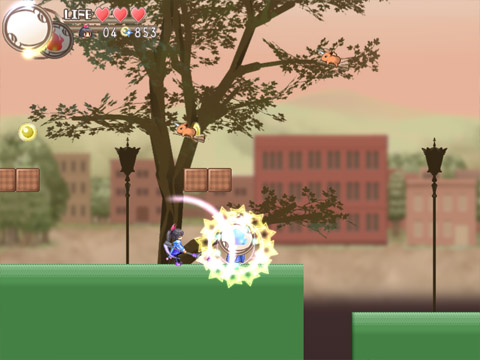 I wouldn’t recommend this one if the jank was a serious concern, but it is ultimately surmountable here. And learning to deal with it opens you up to dozens of creative, challenging levels to clear and explore. Tobari really does some neat stuff with the powers you get, offering all kinds of unexpected interactions with blocks and enemies to allow you into secret areas. The challenge is fair enough throughout the game, though I’ve heard of a post-game EX world that does indeed wander into Kaizo territory. Coupled with charming art and a goofy little story, this is definitely one of the better budget platformers out there. Steel yourself for some serious platforming and a little control wrestling, and you’ll be in for hours of inventive, open-ended fun.