Review: The Void Rains Upon Her Heart

Sometimes you don’t know what you’re missing until a game comes along that really emphasizes it. It’s always little things in games, like the ways combos are calculated or inconspicuous indicators other games lack. The Void Rains Upon Her Heart is not the first roguelike shmup I’ve played, and it didn’t pioneer the elements I’m going to praise it for, but it did roll all of them into one stylish, welcoming package. It also makes the most of its roguelike elements, providing a level of variety and discovery that not many of its peers can match.

A mysterious alien girl awakens in a cave, with barely any recollection of her past life. All she has to go on is her charming robot companion, who informs her of her grim situation: she is under constant threat from monsters who seek to break her heart. Her only weapon against these assaults is her love, which she can use to dissuade the monsters if only for a short time. Getting the monsters to love her instead of hate earns her gifts as well, which strengthen her resolve for the next fight. At the end of this gauntlet she may find a way to truly safeguard her heart, but there’s surely going to be a lot of heartbreak between here and there.

There’s a lot more to this story than I’m dropping here, including entire characters and plotlines left to be discovered. It’s all told through some very sharp writing that also doubles as the game’s excellent tutorial text. Nothing is left to chance here, as you’ll get concise explanations and examples of all of the game’s systems, and spread out over a session or two so as to not burn you out with text dumps or information. This is the first sign that the game is made with exacting care, because even in Early Access the emphasis is on easing players into the systems so they can make the most of the many options available. 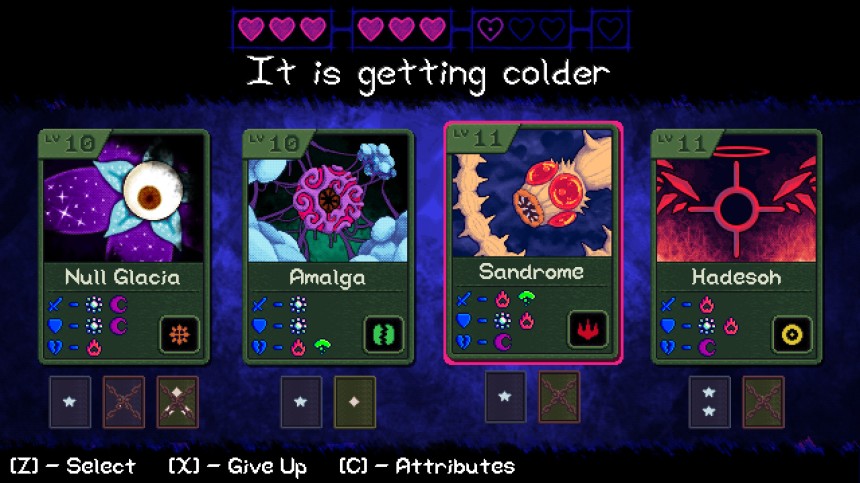 The gameplay itself is straightforward enough, but with some very smart attention to detail. Runs are essentially boss gauntlets, offering you choices of enemies to tackle at each step. Starting out your options will be mysteries to you aside from their difficulty level, but as you battle more and more of them you’ll unlock more about their identities. Bosses feature some very creative designs and attack patterns, and each scales in difficulty with its level so even novice players will be able to take on all comers. Your heart has a handy auto-attack which you can manually charge for bigger single blasts, a “panic attack” that clears bullets in its radius, and a clearly-defined weak point so you know exactly how much clearance you have between shots. There’s a combo system when fighting bosses that’s dependent on doing constant damage, but in one of the smartest considerations of all, the combo meter freezes when bosses move off-screen or behind you so it’s always possible to 100% combo the boss every single time.

Defeating bosses earns you passive rewards that make you stronger for future fights, as well as consumable effects that can give you important boosts. Rewards can affect every aspect of your heart and its attacks, so runs can start to feel very different once you’re pulling down split shots and special panic attacks. You also earn crystals that are used to “radiate” bosses and rewards, which means unlocking their identities so they’re no longer ??? in menus. Radiating also moves the plot forward and unlocks new modes, so it’s a very interesting meta-progression system that gives you something to do without being required to succeed in runs. Honestly you can get pretty far just playing blind the first few times, though when bosses get up over Lv. 10 you’ll be getting into serious bullet hell territory.

The art throughout is soft, colorful, and perfect for this thoughtful shmup. Bosses have very unique looks as mentioned before, and the environments have wonderfully familiar-yet-wrong motifs that seem inspired by all sorts of fantasy and even a little Evangelion. The soundtrack and effects work is just as solid and really help you focus on the hectic pace of fights. Really of all the roguelike shmups out there this is easily one of the most inviting, and only gets more fun the further in you venture. All the considerations for newer players makes it easy to get into, and the difficulty curve means you’ll work your way through the ranks at a reasonable pace. And being in such active Early Access means it’s likely to only improve further. For quick fixes of bullet-hell action and clever bosses, The Void Rains Upon Her Heart is an obvious pick.