Mashing up different genres can create all kinds of unique experiences and challenges. I don’t know if anyone’s tried making a deckbuilding tower defense game before, but even if they did I doubt it was like Monster Train. Setting defenses from your deck and seeing how they fare on their own each turn is plenty unique on its own, even before baking that into a roguelike journey with tons of upgrades to consider. There’s a lot of strategy here that’s going to be new and different, and if the variety holds up it should be more than engaging enough for fans of deckbuilders and roguelikes alike. 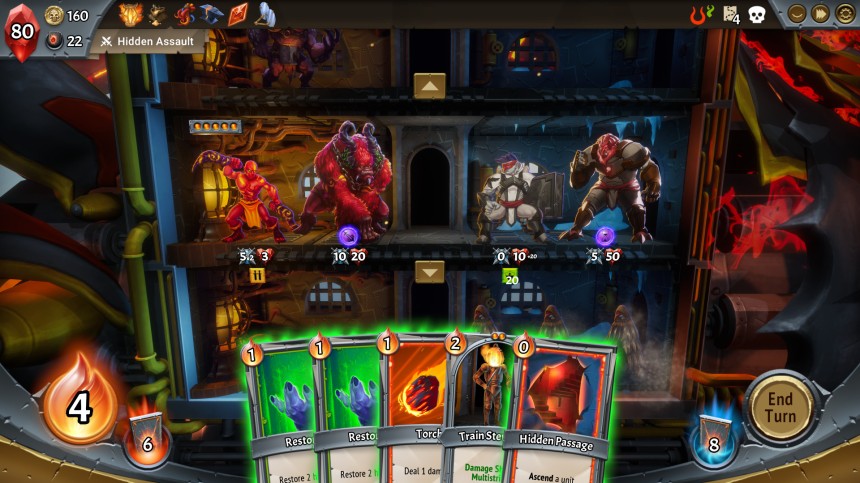 The fires of Hell have been extinguished, and the precious infernal ember you carry is the only hope of restarting them. Loaded aboard a special armored train, it’s up to you to make it through the hordes of the heavenly host and return the flames to working order. You can’t expect the holy types to just let you cruise on past when final victory is within their grasp, of course. The interior of your train has four floors which must be defended as angels and saints work their way up from the bottom to the ember at the top. Between battles, you’ll make stops along your route to search for treasure, new recruits, or enhance your already potent abilities.

All of this is expressed as a deck of cards you manage. During battles, you have a hand that represents minions and spells you can apply to the three main levels of the train you’re defending. Minions take up different amounts of space on each floor, and can be enhanced with all kinds of effects like armor, shields, rage, and thorns. Once you’ve played all the cards you can for the turn, battle resolves automatically with your foes generally going first. Enemy units make their attacks, your units make theirs, and any enemies that survive the round move up to the next level towards your ember. After a few waves of this, the boss appears, working their way up the same but continuing to battle on each floor until either they or your own units are wiped out. 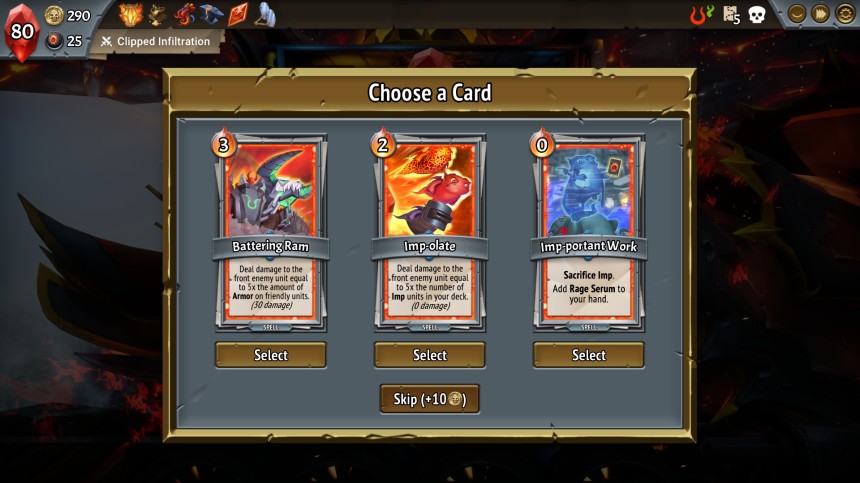 Even within this simple tower-defense-ish structure, there are several strategies that you must balance. Enemies have wildly varying amounts of health, from one to four points for attackers to 50 or even 100 for tankier types. This is true for your own units too, so you’ll need to plan out who can take hits and how you can pick off the weaker but deadlier foes with spells or other trickery. There are plenty of healing cards to pump your wounded demons back up with if you like, and there are even quiet turns between waves for this purpose. All that goes out the window when the boss shows up, though, because they’ll spend every turn chewing through an entire floor and leaving you no time to do any active healing or strategizing. Ultimately this means you have to build a defense that can withstand light, varied skirmishes and prolonged assaults, lest one or the other reach your ember and smash it.

My big question right now is how many strategies this really leaves open to the player in the end. In the current beta there are two clans that you pull cards from: traditional demons that are big on direct damage and armor, and earthier types that favor regeneration and thorns. Presumably there will be more clans in the full release to mix and match, but for now combining enraged demons with tanky constructs seems to be  the way to go. You’ve got a fair bit of customization along your train’s route too, including upgrading units and spells with specific stat boosts, upgrading your ember to take or deal more damage, picking up artifacts that provide global effects, and even expanding the unit capacity of your floors. It’s all very reminiscent of Slay the Spire outside of battles, right down to the new cards unlocked across subsequent runs.

Combined with a very flashy art style and some solid audio design, Monster Train is shaping up to be a fine twist on deckbuilding roguelikes. The hands-off battles call for a lot of predictive strategizing, and the wide variety of minions and foes to mash them against means there’s plenty to learn from even a single run. And there’s even more to factor in with the many upgrades and artifacts to pick up between battles. We’ll see how broad those strategies become as the game nears release, but I’ve seen enough here to be very much looking forward to it.

Monster Train is scheduled for a Q2 2020 release.