This game was selected as one of our April 2020 Reader’s Choice Reviews. Learn more on our Patreon page.

It can be tempting to offer players a vast world to explore and master, but this only makes it harder to design. Rarely is it enough to create a world and leave people to their own devices in it, because of how important direction is to both learning the rules and finding purpose. Direction, or lack thereof, is the only thing really holding me back in Horizon’s Gate. I’ve figured out how to make money, build my fleet, grow my prestige, and lay my enemies low, but less so what to do with my skills and resources. Fortunately, there’s plenty to do in this lush world besides advance the plot 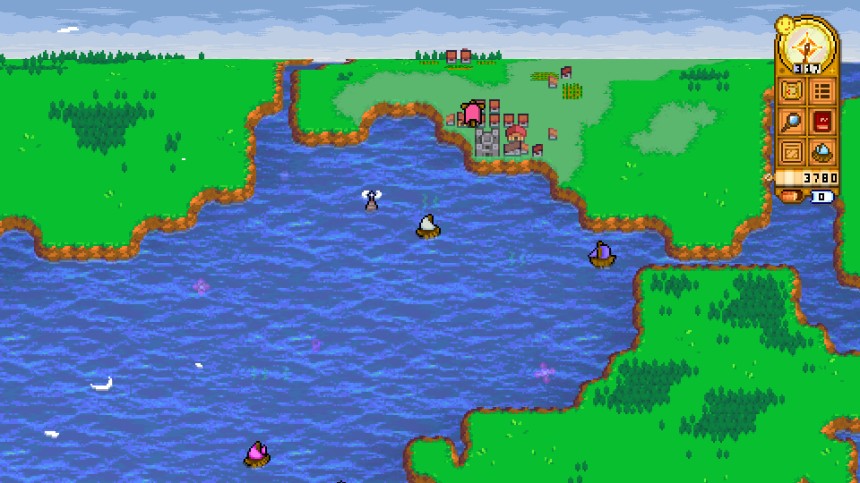 As a commodore of the island nation of Dominio, your star was on the rise. A single fateful night was enough to blot it out, though, leaving you with only a tiny boat and a long-time friend to start over. But start over you can, building your reputation as a trader, explorer, or mercenary, allying with another of the world’s nations, and gathering the ships and crew to become a formidable force yourself. Hidden somewhere on the vast oceans are the clues to what happened on that terrible night, and following them may lead you to uncover even worse secrets about your lost home.

There’s a lot more to find besides that, though. Horizon’s Gate is a mash-up of turn-based tactical RPG combat and free-roaming sailing, like if the world map in Final Fantasy Tactics were replaced with Sid Meier’s Pirates. Once you get through the plot-driven tutorial, you’re left at a remote port town with a ship, a basic crew, and a few leads to follow up. Surely the first thing you’ll want to do is sail the world, discovering new ports, meeting new characters, and learning about the many trade goods available. Trading is perhaps the easiest system of all to grasp, and significantly easier than most full trading sims, because the price you buy trade goods at is always the lowest possible and your profit is determined by how far away from the source you sell it. You can also earn money for how much of the world map you’ve filled in, which goes a long way towards encouraging exploration.

You’ll find caves, forests, and other points of interest to put ashore at as well, which is where top-down JRPG wandering and turn-based tactics take over. You can take four of your crew with you on adventures, each with their own equipment, stats, and two classes selected from an extensive job system. Battles commence right there on the same map you’re exploring, and turn into large brawls between your group and sometimes two or three other squads of enemies that might also be battling each other. In addition to the basic attacks of your equipped weapons, each character can also have around a dozen active skills taken from their two job classes. Skills can range from powerful spells and area attacks to pushes and repositioning, so your strategies will very wildly depending on your party composition. What won’t change is the constant shuffle of flanking and back-stabbing characters, since facing rules are very much in full effect here.

Sea battles with pirates, beasts, or unfortunate merchants works in a similar turn-based fashion, but it can be very difficult to tell what fights your vessel is actually ready for. That’s true of all the odd little stops and dungeons you find in your travels, really. Some may contain a small bandit group you can easily dispatch, while others could be packed to the gills with spiny horrors. It’s part of the game’s open nature, that you can easily head off in a direction or make port at a location that you’re completely out of your depth for. The little quests the storyline leaves for you don’t help much in this regard, suggesting you build your fame with a nation by doing odd jobs for them or exploring general areas. I can’t even find the channel the main plot is wanting me to check, despite being a very simple direction from a capital city.

Ultimately I don’t think the story is going to be the main draw here, and it doesn’t really need to be. There are hours of gratifying adventure to be had here, growing wealthy from trading and powerful from exploring. Combat is complicated and there’s tons to learn about the game, but the unique alternate-fantasy setting and vast array of secrets to turn up leave plenty of hooks to keep players invested. One of my favorite features is a Look function that can be used on literally every item and scenery object in the game, adding it to your journal and earning you money based on how rare the discovery is. It’s a feature that alone can keep me coming back to Horizon’s Gate, and with that kind of attention to detail and gameplay, I can easily suggest that others give it a try.