A game doesn’t have to be deep to be good, but it certainly helps. A good, shallow game will still keep you occupied for the duration, while a good, deep game will consume your attention indefinitely. It’s the deep games that keep us hooked and drive our imaginations, so I should probably tell you up front that Bunker Punks won’t be doing that. What you see in the first hour of the game is what you’ll be doing indefinitely, and while it’s great fun it’s not the kind that gets its claws in you. Still, its unique progression, low-res presentation, and killer soundtrack all put forward strong cases for sticking with it even after the freshness fades. 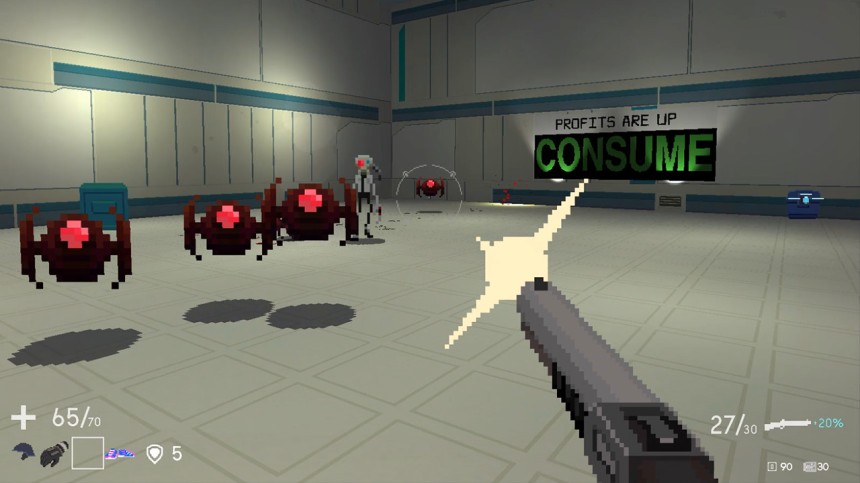 It’s the future, the world’s gone to shit, and everyone’s holed up in bunkers run by the unchecked megacorporations. Really just imagine another four years under Trump and you’ll have it, only with more robots. The Bunker Punks are a revolutionary group that assaults said bunkers, loots them for gear, and works their way up the chain until theoretically toppling their dystopian masters. Those robots I mentioned are going to get in their way, of course, but a host of firearms and gear can make the difference, along with the development of the Bunker Punks home base to provide new game-changing bonuses.

That last bit is what sets this one apart from other FPS roguelikes, really. You need to work your way across a map of corporate installations but between each raid, you return to your base to further expand it. New rooms in your subterranean complex unlock bonuses to your stats or specific weapons, which can grow as you haul home more cash from your targets. There’s also a store to buy additional gear (good if you want to complete a set that gives bonuses to specific weapons you’re favoring) and a healer that you’ll need to pay to keep your folks healthy, but most of your money is going to go into base-building. Honestly it’s really just a further obfuscation of the Rogue legacy system of enhancement except it’s specific to every run, and it tends to have a more dramatic impact here. 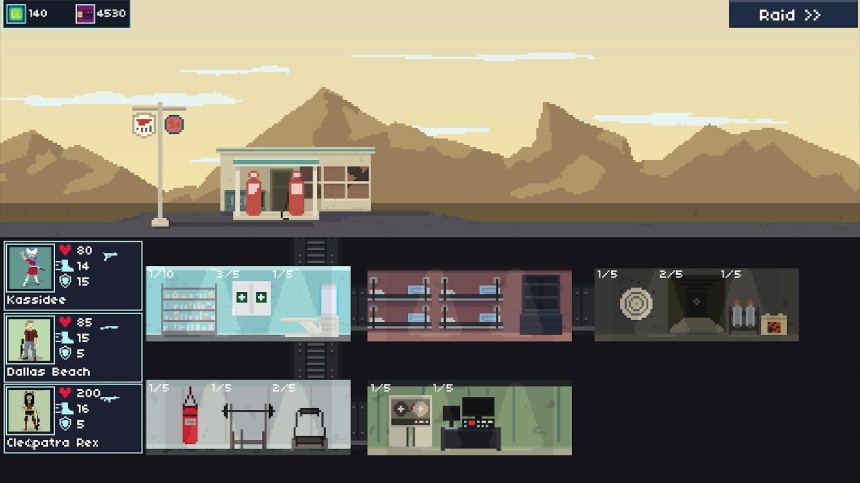 All the bonuses in the world won’t save you from getting your skull ventilated by an automatic turret, which is where the FPS part comes into play. Bunker Punks borrows from the Wolfenstein era (the original, you fetuses) with levels featuring no elevation changes and chambers full of walls and boxes. Luckily your 2D pixellated foes here have no hitscan weapons, so you’re free to weave between them and deal death with your frankly absurd movespeed. In fact you are encouraged to do this, as chained kills within a very tight timeframe (VERY tight, like a second) will provide bonuses like additional health. That’s important as health is quite limited in this title, but more important is the freedom to dash around levels like a psychopath, blazing away at enemies in a strategic pattern.

It would help if your enemies were super weird or compelling, but alas this one has to stumble over something. Your foes are exclusively drones, automated killing machines that slavishly execute their attack patterns on you with extreme prejudice. Early foes are little more that miniature flyers and robot employees, but later in the game you’ll find giant spider mechs and rocket-launching combat suits guarding the elevator to the next level. Outside of these encounters, though, there’s little variety to the bunkers you’ll raid. The layout is randomized but the enemies are always pulled from the same unremarkable pool, including a small assortment of stationary turrets. Even the loot gets to looking the same after a few runs, as there really aren’t many weapons or items to choose from.

I could also complain about how you can’t unlock new upgrades until you fail a run, meaning you won’t get basic abilities like carrying extra loot until your third run or so. I guess I just did complain about it actually, so let me also say that these are minor concerns in the face of raw fun. Bunker Punks borrows the original DOOM sort of pacing, giving you the speed and the tools to command the battlefield solo, assuming you can stay away from enemy shots. It might not grip me for long, but for as long as it does I’m finding Bunker Punks an intense, rollicking good time.