I made the mistake of playing the original Hard Redux on hard difficulty, which turned an otherwise chaotic arena shooter into an absolute slog that I could not finish. Supposedly the Redux version improves on this sticking point while adding in some additional features and polish, but I’ll be honest that I’m not really seeing it. It’s still a fine little shooter that pits you and your Swiss Army guns against scads of mechanical monstrosities, just not one that’s going to grip you past the initial spectacle of blowing up every part of every level. That’s enough to earn it a pass, assuming you’re not turned off by the little annoyances throughout.

The cyberpunk hellcity of Bezoar (definitely wiki that if you’ve never heard of it) is the last bastion of humanity on Earth, constantly beset by junkheap robots intent on Matrixing the place up. As Major Fletcher, you’ll find yourself investigating an attack on the city that soon spirals into a chase across the metropolis to catch a mad scientist bent on betraying Bezoar. You’ll have to scrap hundreds of ravenous robots on your road to the devious doctor, and you’ll be causing plenty of property damage along the way.

There’s not much else to the story to dig into, told as it is via poorly-translated motion comics between levels. And you don’t need much story here, because Hard Reset flows more in the style of classics like DOOM and Quake than modern setpiece shooters. Levels are linear assemblies of arenas to shoot robots in, disguised as city streets or warehouses or office complexes but always open spaces for sprawling battles. You’ll do a little exploring for health, ammo, and upgrade points, but that’ll mostly be checking corners, blowing up walls you forgot to blow up during fights, and doing a few basic jumping puzzles. Don’t expect a single NPC, actual puzzles, or any sort of life to the city aside from you and all the robots trying to kill you.

Your foes only come in a few varieties, from small buzzsaw-equipped marauders to lumbering two-armed brutes. They take a healthy number of shots to bring down, so it’s fortunate that every inch of Bezoar is covered in explosive barrels, exposed electrical transformers, and dozens of other decor pieces that detonate. You’ll always be heavily outnumbered in fights but most of your foes are melee-only, allowing you to lure them into precarious positions between flammable vehicles or unstable terminals. The raw destruction you can unleash is delightful, accented with rich particle effects and tons of flying metal, but I’d be lying if I said it didn’t get samey after a few hours.

This can be attributed to some terribly arbitrary design decisions that define Hard Reset. Chief among them is how you only get two weapons, a rifle and a plasma gun. They’re big, meaty things and they can be upgraded with four additional firing modes like shotgunning, grenade launching, railgunning, and so on. All told you can have ten “weapons” each with main and alternate attacks, but they’re all just modes of your transforming guns. It’s a bit of a let-down stylistically, and even moreso when you have only two ammo pools to manage. Woe be unto you if you like one set of weapons more than the other because you’ll be running out constantly during fights, despite ammo being plentiful between fights and regenerating anyway. 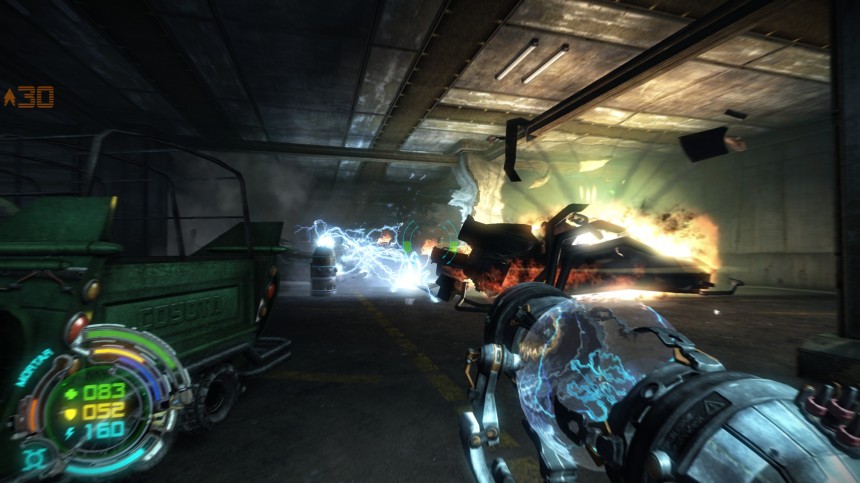 For a game that’s already so limited in the enemies and combat offered, it seems a poor move to further limit you in weapons and ammunition. You can still extract some fun out of this one but selecting the right difficulty will be essential, because harder ones just exacerbate these issues. If you can find that sweet spot though, Hard Reset is plenty of dumb fun in a cyberpunk playground. I’ve always thought of it as Blade Runner by way of Michael Bay, trading any sort of depth or insight for explosions. Assuming that sounds like a good time to you then I’m sure it will be for a while, at least.