Far Cry took an important step in freeing first-person shooters from the confines of linear maps, but only the first. While it offered plenty of liberty in where to go and how to tackle challenges, it gave little to no incentives to exploring or deviating from your objective. Far Cry 2 was the second step the series needed, expanding the open maps of the previous game into a proper open world, and dotting it with towns, missions, and points of interest. In spite of this breadth of content it remains a very focused experience, offering missions that advance the plot, upgrades that enhance your lethality, and atmosphere that compliments the darkness of the narrative. So long as you can make peace with a few prickly design decisions, this one still stands as one of the best in the series.

An unnamed African nation is in the throes of civil war, and mercenaries from around the globe have flocked to the carcass of a country like the vultures they are. Somewhere in this morass is the Jackal, an infamous arms dealer who’s been dragging the war out by selling to both sides. The CIA, never ones to miss out on fucking with a sovereign nation, sends you to murder him, which you botch by coming down with malaria of all things. As a weakened outsider to the conflict, the only way you can get close to your mark is to wade into the war and follow the trail of bodies, which eventually puts you at odds with mercenaries, revolutionaries, and even your mission itself.

If you’re coming to this one from later in the Far Cry series, you might be a little surprised at how grim it is. No wise-cracking hicks or animal buddies here, just blood diamonds and betrayal all the way down. To close in on the Jackal you’ll need the trust of the warring factions, which requires you run missions for them to kill and destroy at their whims. You don’t really pick a team, mind you, you’ll have to flip back and forth and before long you’re likely to forget which side is which. I’m fairly confident this is by design because trust and loyalty are a big part of the story, evidenced by your alliances with the mercenaries and how that whole storyline and the fate of the Jackal play out.

Starting out you’ll be a long way from any of that, though. Far Cry 2 is a long, long journey of driving the savannas, scouting outposts, raiding strongholds, and hunting diamonds. This epic plays out across a sizable map, with a town and merc base near the center and dozens of key locations scattered around. Each mission will send you to some far-flung village or armory or stretch of road to kill someone or burn something, prompting you to do some planning on your route. Safe houses along the way can be unlocked by killing their (hostile) inhabitants, guard posts can be cleared for a short time, and weapon shops can provide permanent access to weapons in exchange for diamonds. It’s easy to get side-tracked on the way to your target, and the map won’t seem nearly so imposing once you’ve done a few meandering runs around unlocking things.

Your buddy will also provide you an alternative to every mission. During the intro segment you’ll make friends with a fellow merc, who will offer you an extra side objective that will change how the mission proper will play out. For example, you might have to blow up a motorcade to kill the chief of police. But your buddy would have you steal the chief’s ledger from his brother, which would make him panic and return to the station. Often the side objective will make the mission more complicated, but completing them gets you upgrades to your safe houses like ammo stocks and cases for storing extra weapons. You have another buddy who serves as your revive if you go down, getting you back on your feet and fighting alongside you to get you through tough times. 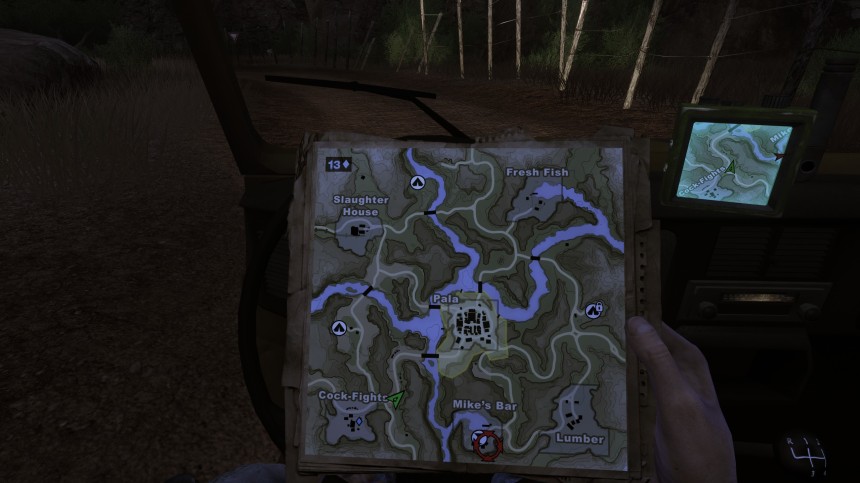 It’s this attention to detail that makes Far Cry 2 so remarkable. Every system in the game has a purpose and is fully-realized in its implementation. Your map is chief among them, an actual paper map and GPS that you pull out to consult for directions. It exists in the world, flapping around when you sprint and forcing you to take your eyes off the road if you open it while driving. But you might not have to, because the many signposts around the countryside will change color to indicate how best to reach your main or side objectives. Things like this do wonders for immersion and pair well with the detailed animations and rich sound effects that accompany everything you do.

I say that every system has a purpose, and it does, but not everyone agrees on what those systems add to the game. A long-standing gripe with Far Cry 2 is how enemies at checkpoints respawn almost as soon as you leave. I consider this one pretty overblown, as there’s generally little reason to ever go back the way you came and if you did, it’s another opportunity to experience the game’s excellent gunplay and surprisingly versatile AI. Patrolling vehicles are also much-maligned but they provide an additional challenge either for stealth or sharpshooting action, and a single grenade or IED will erase them anyway.

The problems that Far Cry 2 has now are mostly due to age and the uniqueness of its engine, as it can be extremely buggy on modern systems. For me it looks and plays as good as it ever did, except for some scripted NPCs going all Jacob’s Ladder and wiggling their heads or phasing out of existence. Aside from that the crisp graphics and tactical gunplay continues to rival even modern entries in the Far Cry series itself. It’s a long game, easily twice as long as you’re expecting, but if you appreciate all it offers in terms of action and exploration you won’t tire of your ethically-questionable adventures anytime soon.