At this point, you’re probably more familiar with this incarnation of Shadow Warrior than the ancient title that spawned it. That’s for the best, really, even though the original was part of the holy BUILD Engine trio with Duke Nukem 3D and Blood. OG Shadow Warrior suffered from some punishing difficulty and unfunny racism, both elements that this newcomer has resolved. There’s really not a lot to hold against this one, in fact, aside from some meandering levels and underpowered weapons, which are more than made up for with a sharp story and enthralling combat. 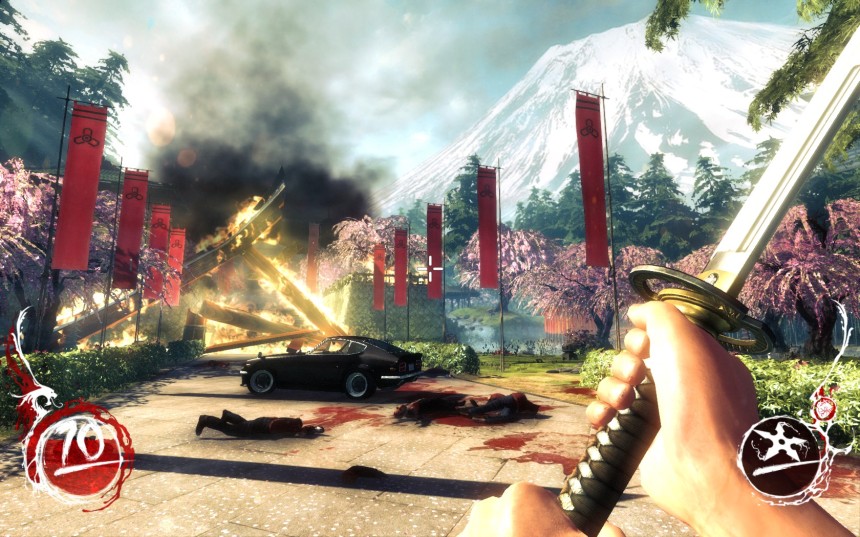 Lo Wang is living the dream as a nerd-turned badass, selling his potent sword and banter skills to the highest bidder. In this case he’s been employed by the corporate magnate Zilla to deliver a legendary sword, a job that gets terribly complicated by betrayal and the appearance of terrible demons. Caught on the cusp of a trans-dimensional war, Lo Wang teams up with a smartassed demon named Hoji to bone up on his ninja skills and take the fight to the bastards tearing up his town. That journey will take him to scenic villages, corporate high-rises, massive tankers, and the worlds beyond our own in a bloody and often hilarious adventure.

If you remember anything about the original Shadow Warrior, it’s probably the absolutely terrible puns and cringe-worthy Engrish jokes. The modern Lo Wang is a far snappier, robust character that always has something clever to say no matter how dire the straits. His partner Hoji often tops him in pure snark, and the interplay between the two is some of the funniest, most charming buddy comedy in gaming. It’s striking how well the writers here got the characters, how they found ways to make them badass and funny and self-deprecating all at once, and it’s at the forefront of the game from the terribly clever opening to the surprisingly emotional conclusion.

I doubt you’re really here for the feels though, but thrill-seekers will not be disappointed either. Shadow Warrior smartly puts disproportionate emphasis on your sword, maintaining it as a potent and gratifying weapon throughout the entire game. Potent, in the many upgrades and magical sword techniques you can unlock for it, and gratifying in how it literally bisects, decapitates, and eviscerates even your largest foes. Relying solely on the blade for the entire game is going to cause problems with certain flying or armored foes, however, and for those situations you have a fine spread of pistols, uzis, flamethrowers, and rocket launchers to fall back on.

Keep in mind that these really are fallback weapons, though, You can certainly upgrade them to impressive lethality with the game’s robust upgrade system but they’re not really designed to handle entire battles on their own. Shadow Warrior is less a first-person shooter and more a first-person slasher, with the option to throw bullets and explosives into the mix. It’s an approach that becomes intensely satisfying when you cleave three enemies and plug a fourth with your pistol, then scatter the next mob with a well-placed rocket. But it’s one you’ll need to adjust to, and be prepared to re-adjust if the battle isn’t going your way.

All this action plays out over an impressively lengthy campaign, spanning the aforementioned villages and tankers and such. Flying Wild Hog has clearly come a long way here from their Hard Reset days but hints of similar weaknesses are present, chief among them being the length of the levels. Shadow Warrior is a long game, mainly because every level feels about 15-20 minutes longer than it should be. In that time you’ll have plenty of chaotic, bloody fights, but some mixes of foes are sure to throw you off until you find a way around their armor or punishing attacks. It’s not the blistering difficulty of the original, but the challenge can still spike from time to time.

None of these complaints are enough to really detract from the ninja magic on display here. The graphics are still just as bright and detailed as ever, and the sound design will make you feel every slice and bullet impact as the demons fall before you. There’s a host of secrets to find as well that prop up the many-faceted upgrade system, so you’ll have plenty to hunt for in between the massive melees. Shadow Warrior is an excellent revival of the franchise, chiefly because it ratchets up the action to 11 and wraps it in a fantastically entertaining tale of badassery.