Descent has always been something of the odd man out in the pantheon of FPS classics. Despite innovating on the basic first-person formula with its six-degrees-of-freedom free-flight combat, it never took off or spawned the slew of imitators its peers did. It did get two sequels and a brilliant spin-off space sim series, though, and now after far too long it has returned. Only now it’s called Overload, and all the names are different. The head-spinning combat and ravenous robots and flashy weapons and explosive escapes are all back, along with a few new tricks learned in the intervening decade. But in some ways, Overload might be a little too tethered to its ancestors to really rise to its occasion. 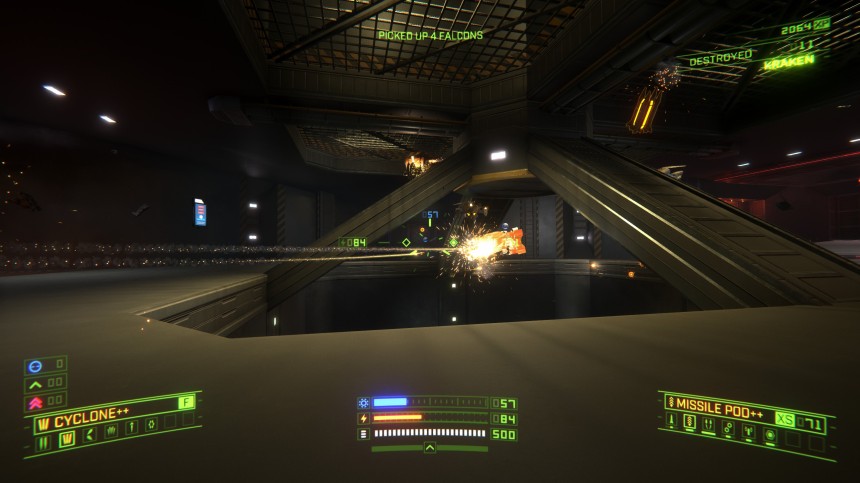 Space mining corp Juno Offworld has pushed out to the moons of Saturn with their Cronus Frontier initiative, a network of bases manned by skeleton crews and worked by robotic autonomous operators. Something has gone drastically wrong though, and the auto-ops have begun taking their mining lasers and rock crushers to the humans instead of the minerals. Your ship, the Iberia, just happens to be in the right place to intervene and happens to have a smart little gunship for you to pilot on search and destroy missions. To root out whatever madness is afoot you’ll need to battle back the auto-ops and destroy the reactors of the fallen facilities, hopefully escaping the blast in the process.

The formula is very much the same as in the first two Descents, but new to Overload is a fairly involved story. The pre-mission briefings drop tons of tidbits about what’s going on in Saturn’s orbit as you gear for your next assault, and each mission has a bunch of concise audio logs that detail the strange machinations that led to the robot rebellion. Eventually the many plot threads weave together to explain the whole mess and point you to a final showdown that… honestly only resolves a small piece of the story. I’ll forgive them a weak ending for keeping the narrative running just through text and logs, because there’s a surprising amount going on that you only really hear about.

Your concern is going to be getting in, blowing everything up, and getting back in one piece, and that won’t be a simple task. Being a six-degrees-of-freedom game, you have the ability to fully traverse the cavernous chambers and winding passages of each facility. These places are packed with deadly robots, with smarter and fiercer ones appearing the further into the adventure you get. Battles are hectic, with you dodging lasers and missiles from every angle and returning fire with your own impressive arsenal. As you progress you’ll unlock gatling lasers, flak cannons, homing missiles, room-clearing warheads, and even exotic tools like time-dilating bombs and vortex-generating missiles.

Finding secrets earns you upgrade points to improve your arms, and this part of the game deserves special note. Overload is absolutely THICK with secrets, tucking away literally dozens per mission. They can be as simple as a floor panel that slides open when you bump it, or a button hidden behind a grating that drops the forcefield around a reactor that powers another forcefield that leads to a maze of tunnels loaded with enemies and items. The upgrade points you find are split into two types, normal and super, used to upgrade each weapon twice. The normal upgrade usually gives a single bonus like more damage or a new feature like enemy tracking, while the super upgrade lets you pick one of two powerful suites of improvements. Even if you’re not dogged in your search for secrets you’ll be able to upgrade your favorite weapons, but if you’re the obsessive type you’ll come out with a devastating arsenal. 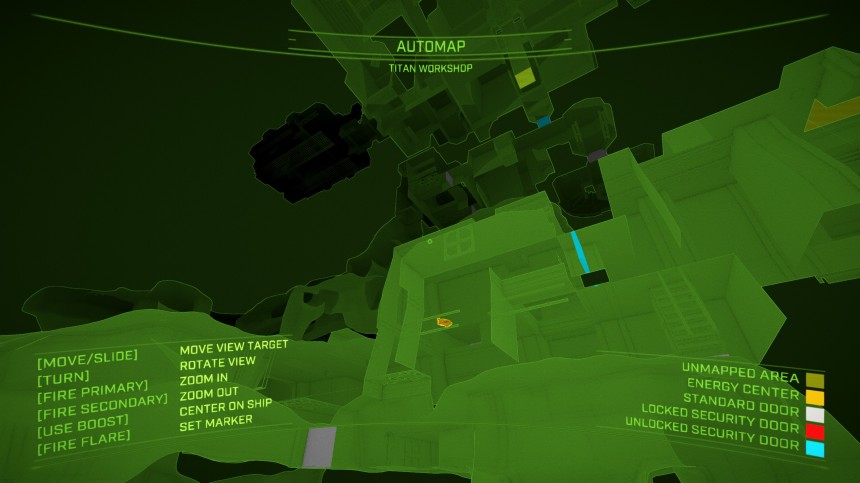 And you kinda need it, because Overload can get pretty brutal. I say this fully acknowledging there are five difficulty levels and you can switch at any time, but I was determined to beat the third and while I did, it wasn’t always a pleasant experience. The early levels ease you into fighting dangerous auto-ops and big swarms, and the middle levels ramp this up to a thrilling challenge. By mission 11 it was getting a little ridiculous, as new enemies could pound my armor down to nothing in an instant if I ever failed to dodge or juke a salvo. There are no checkpoints either, so I resorted to saving regularly once missions got to be 40 minutes long and the risk of failing an escape at the very end became real. It’s also worth mentioning that the last four missions of the game have a significant change of pace that I found more frustrating than anything.

Overload fits right in with the recent wave of aggressively-retro FPSes, and not just for its old-school sensibilities about challenge. The sixteen sprawling levels you’ll blast your way through feature dizzying networks of shafts and chambers that make the most of your free-flight movement, just as the original Descent and its sequel did. But modern level design has been making places look like actual places for decades now, and Overload’s levels… don’t. As detailed as the auto-ops are and as luscious as the particle effects get, the rooms your battles rage in tend to be extremely plain. They never look like real, functional locales, just tunnels for you to hunt keys and secrets and robots in. Don’t get me wrong, they serve their purpose in their layout and complexity, but I have no doubt that a talented environment artist could have added details like catwalks and airlocks to make the levels feel lived-in and real. 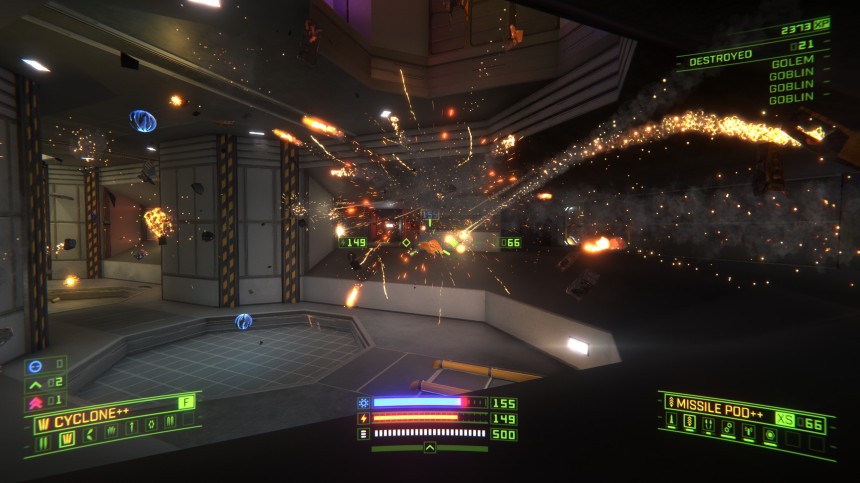 Despite these missteps, Overload’s gameplay is some of the most hectic and gratifying you’ll get in the genre. Your weapons feel powerful and impressive as they shove auto-ops around and shatter them against the walls. Sparks, fire, and metal bits cascade through rooms with every robot you smash, making huge battles veritable typhoons of destruction. And for the explorers in the audience, you’ll have hundreds of secrets to turn up across the seven or eight hours it takes to blast through the campaign. There’s a challenge mode, New Game+, and even multiplayer that you probably shouldn’t count on being populated but hey, it’s there. Overload is the Descent revival we didn’t know we wanted, still a little stuck in the past but flashy and fun enough to make a solid shooter.