Where do you go with the Crysis series after 2? The original game merged open-world shooting with military tactics and superpowers, its spin-off Warhead narrowed the scope for improved action, and 2 pretty much jettisoned the open-world aspects entirely. You would think the trajectory of the franchise would put 3 in full milshooter mode, but you’d be wrong. Despite being built almost entirely out of the Crysis 2 framework, Crysis 3 reintroduces open maps and varied tactics, and expands those features in striking ways. Paired with ridiculous direction of the story and some punched-up combat, it forms a remarkable capstone to the series that has quickly become my favorite of them all. 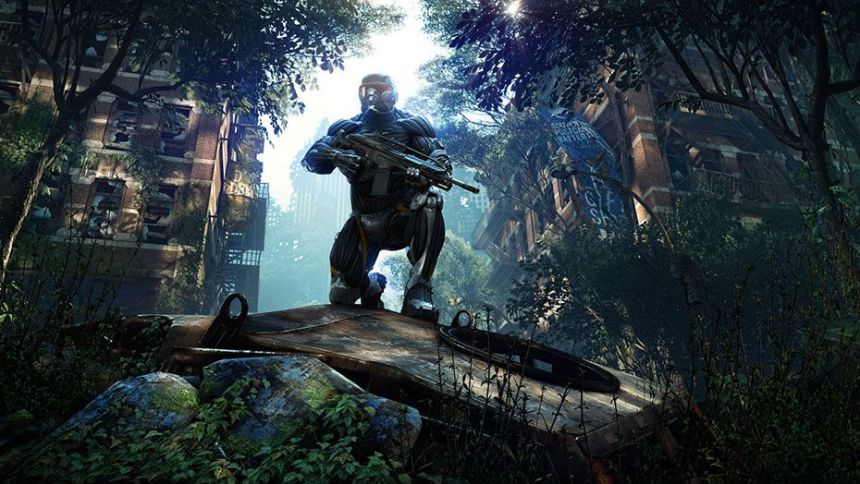 We’re going to dip into serious spoilers for 2 and the early parts of 3, because I really want to emphasize how bonkers they went with the story here. After wiping out the Ceph invasion of New York, Alcatraz (now taking the monniker Prophet from his predecessor) set out to locate the Alpha Ceph, the supposed leader of the hive-minded aliens. Somewhere in that quest he was captured and put on ice by evil PMC CELL, who then spent the next twenty-three years taking over the world by way of an energy monopoly based out of NYC. Series favorite and hero of Crysis Warhead Michael “Psycho” Sykes manages to break Prophet out and sneak him into the Liberty Dome, a CELL preserve that has turned Manhattan into a reforested post-apocalyptic cityscape that holds the key to their power. Psycho and the resistance want CELL toppled, Prophet wants the Alpha Ceph found and destroyed, and both of those aims are set to collide in the streets of post-historic New York.

To reiterate, your adventure will take you from the towering catwalks of the dome’s walls to the open fields of a metropolis reclaimed by nature. You’ll slip between the husks of crumbling skyscrapers, sneak through the underbrush invading shops and train stations, and then break into intensely cyberpunk complexes of autoturrets and smart mines. It’s a setting unlike any other I’ve experienced, this juxtaposition of overgrown jungle terrain, urban ruin, and dystopian tech, and it’s one I’m eager to see more of if anything. The story has also been punched up from 2, calling into question Prophet’s nature after decades in the now-godlike nanosuit and delving into Psycho’s traumas during the rise of CELL. It’s not Oscar-worthy by any stretch but I greatly appreciate it after the boring military objectives and bloviating characters of 2.

It’s not just the setting that’s been upgraded, either. Crysis 3 is very clearly built on the same engine as 2 but loads of noticeably improvements have been made to the combat and complimentary systems. Enemies seem to have been toned back from their extreme density in 2, partly because of the introduction of the bow. It’s an absurd addition to a game where you can rip mounted guns from their bearings but it allows you to strike while cloaked, instantly killing most enemies and offering an assortment of explosive and electric arrows that interact with the environment. Huge swathes of the game can be conquered Predator-style by stealthing past patrols, executing troops in melee range, and perforating any targets beyond your deadly reach. This full-stealth approach to combat feels desperately needed in retrospect, given how gratifying it is to annihilate a patrol without any of the members ever catching so much of a glimpse of you.

The revamped upgrade system reinforces this freedom in a big way, giving you a grid of powerful perks to assemble a deck of four from. You can choose from a full range of combat, defense, stealth, and tactical enhancements, each providing significant boosts to different abilities and even unlocking some new ones like running on water and ground pounding. Each perk also has a condition for upgrading it to a more potent version, which gives another set of side objectives to pursue. Unlocking perks requires you to find cases of nano material, easily spotted using the new visor which tags enemies, devices, and items for you to track during combat.

There are actual secondary objectives now, returned from the original Crysis, along with significantly more open maps for them to populate. I’m still not calling it open-world; these aren’t the vast jungles and coastlines of the first game, just hugely-expanded levels like if you multiplied the maps from 2. They still provide important opportunities for exploration and also varied approaches to enemy encampments, and they fit nicely with the open motif of reforested New York. Your main objectives remain on a linear track though, just as they have through the entire series but at least now there’s very little securing LZs and defending high ground.

Most importantly, Crysis 3 looks as good as ever. The overgrown city and technological strongholds are stuffed with details, from gently-wafting foliage to shimmering pipes and panels. The characters are more impressive than the sometimes-underwhelming cast of 2, and the weapons are just as weighty and gratifying as you’d hope. Really the only part of the game that gave me any pause was a melee alien that had seriously weird AI patterns, every single other sequence in the game was a joy to blast through. It’s funny that it took Crysis four iterations to land on an ideal balance, but I’d be lying if I said this one wasn’t my favorite now. With total freedom to choose your approach in a remarkable world of reclaimed cityscapes, Crysis 3 takes the series to its pinnacle for the finale.