The original BioShock introduced the world to an impossible underwater city full of wonders and horrors, constructed out of a mad confluence of styles and concepts. BioShock 2 didn’t advance the concept in any way except the combat, so it fell to BioShock Infinite to set the world on fire again. And I guarantee you, the moment you step out onto the streets of Columbia, a shining Reconstruction-era metropolis suspended in the vast blue skies, you’ll think it did just that. Infinite builds on the BioShock formula in a lot of important ways but detracts from it in others, and once you get a better idea of what passes for a story here you may find yourself significantly less impressed. 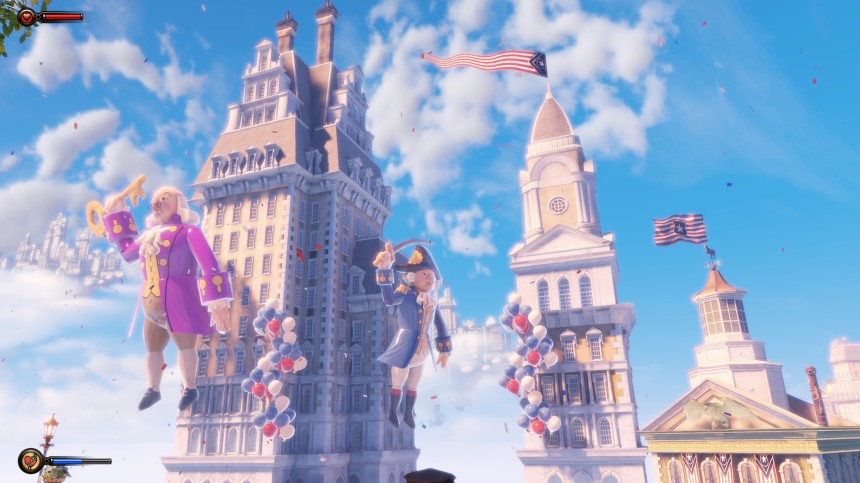 Apparently the thing for megalomaniacs to do in the BioShock universe is build cities that shouldn’t exist. Following the Civil War, a group of Extremely Not Mad white people led by their “prophet” Zachary Comstock constructed Columbia, an archipelago of airborne buildings and streets drifting in the skies above America. U.S. Cavalry veteran and hard-boiled gunman Booker DeWitt has been hired to infiltrate Columbia to liberate a certain young lady for shadowy interests. While a perfectly capable sort for shootouts, he soon finds himself pitted against clockwork monstrosities and simmering revolutionaries fighting for the fate of not just his mysterious charge, but the fate of the city and the future of the country.

I hope the thing that stood out to you there was the 19th century flying city, because Columbia is one of the most incredible settings I’ve seen in gaming. Whatever you thought of Rapture is sure to pale in comparison to the shimmering brickwork and towering monuments poking from the clouds. It’s a fully-realized city as well, with roadways carved across the islands and modular bridges and cable cars and skylines connecting them in dynamic ways. Even the atmosphere is impressive, cultivating a mix of wonder and repulsion from a brightly-lit metropolis seething with corruption and bigotry.

That last bit is kind of important, what with the city being built by Confederate fanatics that worship Washington, Franklin, and John Wilkes Booth as deities. As you wander the populated streets of Columbia you’ll see posters proclaiming the defense of the white race, and later you’ll find the squalor in which the non-white servants and the underprivledged are forced into. You’ll also cross paths with a resistance group aiming to topple Comstock’s control of the city, and in your dealings with them come to find they’re not quite the equitable liberators they first appear to be. Given the context and the real-world parallels to anti-segregation movements this is a particularly distasteful bit of villainizing victims, and I’d probably be angrier about that if it actually amounted to anything.

But it doesn’t, and the reason it doesn’t is my biggest problem with the game. During your adventures in Columbia you’ll encounter a huge amount of plot threads that appear to be winding together. There are the odd twins responsible for the city’s unusually advanced tech, there’s a industrialist with an iron grip on parts of the city, there’s Booker’s mysterious debt, there’s the girl and her monstrous protector, there’s Comstock and his suspiciously-deceased wife, there’s Daisy Fitzroy and her revolutionary Vox Populi… there’s all of this, crammed into a floating city the likes of which you’ve never seen before. And in the end, none of it matters, because the story isn’t about any of it. 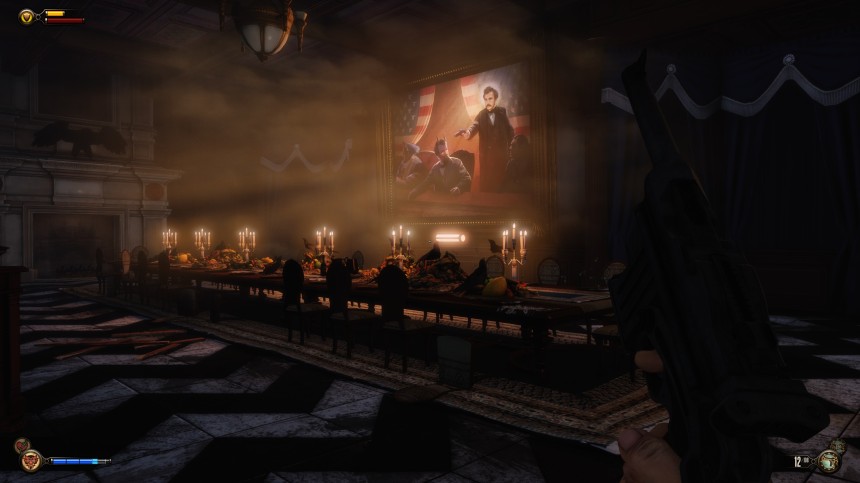 I’m going to beat this point to death with a golf club because it’s so central to the experience. BioShock Infinite sets up a perfectly solid narrative with Booker’s quest to rescue Elizabeth from a mad prophet in a flying city beset by revolutionaries and unchecked science, and shoves it all aside. What the game ends up being about is some hard sci-fi nonsense about alternate dimensions and time travel, which is a massive, massive disappointment when you have the potential for so many character moments and messages already. Instead of building Daisy Fitzroy as a counter to Comstock’s racism and bigotry, she gets written off as a psychopath and Comstock’s terrible views get buried in favor of his part in some interdimensional conspiracy. It all culminates in an ending that leaves most questions unanswered, raises new ones that don’t get answered, and retroactively makes the BioShock series stupider for being connected to it.

I hated the ending to BioShock Infinite. It’s the worst kind of intellectual flailing in an attempt to produce more meaning than is actually there. And unlike the original BioShock, it doesn’t even connect the story with the gameplay effectively. Your pseudo-magical powers here come from vigors which are never explained or explored in any way even remotely similar to the treatment plasmids got. Elizabeth’s powers figure prominently in combat as well as the story, but never get ironed out in any consistent fashion. Oh, and don’t expect any of those memorable setpieces and bosses that the original was known for. There’s maybe one or two early on, and then nothing until an absolutely bizarre waste of time fighting a spongey boss that comes out of nowhere and requires half an hour of backtracking alongside.

My ire with this game is partly because I enjoyed it so much up to the midpoint, and was still invested in it until the end. The levels may be mostly linear but I was thoroughly enamored with the concept and setting, which made every area feel fresh and fascinating. There’s still a hint of horror to the game in the vicious, bloody takedowns you can perform and the vileness of some of your foes, granting even the sunniest streets a sinister feel. You’ll find tons of desks and trashcans to loot, plenty of recording devices to mine for backstory (that mostly won’t matter, but still), and a refreshing preponderance of civilians milling around most areas to make the place feel more lived in.

On the mechanical side, BioShock Infinite feels like a big leap forward and then a few small steps back. Combat is faster-paced and more hectic than ever before, and you have your guns and your vigors at the ready at all times. There’s a huge variety of weapons but for some reason you can only hold two at a time and they all have limited ammo reserves, forcing you to switch up constantly. Making foes vulnerable with vigors or environmental hazards is terribly important for dropping them quickly, but larger enemies are still intensely bullet-spongey. The skylines add some much-needed mobility for bigger fights, and offer a new dimension to launch attacks from. Ironically it almost tracks with the story, with fights getting frustratingly rough after the halfway point and borderline unbearable by the end. 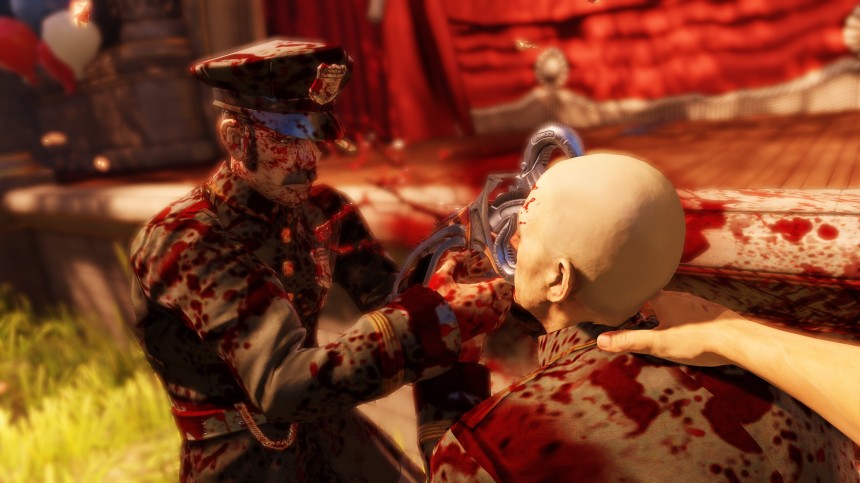 Since beating the game I’ve struggled with whether or not this review should be a recommendation or a warning, and in the end I’m gonna say you should give it a try. Obviously not everyone hated the story as much as I did, and it’s still not bad enough to wipe out the hours of fun I had up to that point. Columbia really deserves to be experienced, and that experience is sure to be a thrilling one with battles across airships and skylines. And even the ending is the interesting kind of bad, the kind that tries and fails to do something meaningful, which can be worth seeing through. Ultimately, BioShock Infinite is half of a great game and the end of a terrible one, but it stays good and impressive long enough to make the bad bearable.