This title is DLC for BioShock Infinite.

So here we are, at the grand finale of the entire BioShock franchise. We’ve seen the rise and fall of two impossible cities, and the toppling of two megalomaniacs at the hands of men they helped create. The first Burial at Sea began to weave together the strands between Rapture and Columbia in a painfully inept way, one that added nothing to either story and essentially deleted a key figure without even so much as a goodbye. This, the second Burial at Sea, does far more work to tie the BioShocks together but still does so in forced, needless ways. What you get in the end is a big, sticky mess of plot mashed together in the service of tragedy and loss, instead of any kind of proper send-off for the series. But at least it plays a bit better. 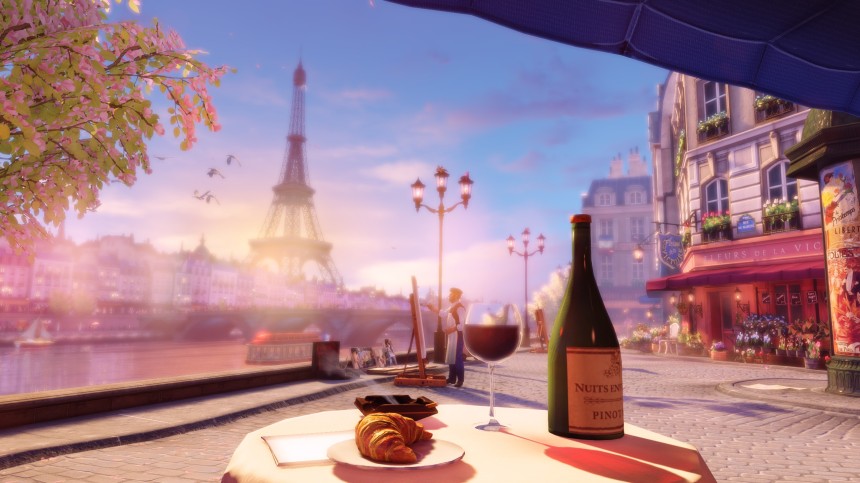 Our dear Elizabeth has given up her day job as a dimensional deity to save the Little Sister (no relation) that she was so keen on frying in Burial at Sea 1. Without her powers she’s trapped in Fontaine’s sunken department store, desperately negotiating with the notoriously untrustworthy Atlas for the lost girl. Their dealings will send her back to Rapture, into the company of its most infamous figures, and even see her return to Columbia for a remarkably silly fetch quest. Along the way she’ll uncover the secrets strung between the two cities, the keys to their similar advancements and monsters, and insinuate herself into the most fateful dealings of Rapture.

For all the talk about seeing the world through Elizabeth’s eyes, this story isn’t even really about her. She’s given a patently absurd motivation brought over from the last DLC, which scribbles all over her characterization from Infinite proper. Her actions are entirely in service of this new motivation, to find this little girl she has essentially no connection with, and through that you get the stories of BioShock’s other important characters. You’ll learn plenty about our boy Atlas in the lead up to the original game, witness a ham-fisted (but appreciated) clarification for Daisy Fitzroy’s actions in Infinite, and finally meet the shadowy Suchong, portrayed in an oddly racist way compared to his BioShock 1 persona.

All of this sutures the worlds of Rapture and Columbia together in ways that were honestly entirely unnecessary. Thanks to the Deus Ex Luteces, the technological wonders of both cities are given fully linked explanations, adding some important context to creations like vigors and Songbird but retroactively tying up Rapture’s tight ecosystem in Columbia’s messy sprawl. These two universes are rich enough to expand their concepts without closing them off as cribbed, but that’s just what thoughtless links like this do to unique ideas. It’s crowned with some genuinely terrible things happening to your poor avatar Elizabeth (including a torture scene that I almost walked away from) and a demotion of her own story just to tether it again to another key BioShock figure.

I’m erring close to spoilers here to make it clear just how much the terrible plot detracts from the experience, because the actual gameplay isn’t half bad. Elizabeth isn’t the brassy shit-kicker Booker is (though she’s taken to growling through the same tired one-liners) so controlling her is almost entirely a matter of stealth. Her melee attacks KO unaware enemies and she gets a handy tranq crossbow, along with a few limited lethal options that help push you more towards the path of peace. Your first plasmid is also a practical cheat mode for stealth, allowing you to see through walls and turn invisible, so even if you’re not terribly stealth-inclined you might be able to force your way through.

The usual looting and audio-log hunting is back, and there are some decent side paths that hide more secrets of the shared universe and handy plasmid upgrades. It would take you perhaps two to three hours to get through Burial at Sea 2, and though it isn’t really much bigger than the first DLC it feels that way because of the varied environments and slowed stealth gameplay. But if you’re the kind of person that values story at all or enjoyed Elizabeth’s character in Infinite, this is not the experience you’re looking for. Rapture and Columbia worked so much better when they were their own worlds, and Booker and Elizabeth deserve better than what these idiot writers have done to them. No matter how much you liked Infinite, it won’t be enough to excuse this travesty.